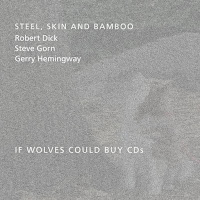 Robert Dick (flute, bass flute, piccolo), Steve Gorn (Indian Bansuri bamboo flutes, clarinet), and Gerry Hemingway (drums, percussion, voice) play free jazz fused with eastern musics for 50 minutes over nine tracks on If Wolves Could Buy CDs. Dick and Gorn started the flute duo Steel & Bamboo in the early ‘90s, recording one track on Venturi Shadows and their lauded 1993 eponymous album; Hemingway joined three or four years later to create the trio here, Steel, Skin and Bamboo, and record If Wolves Could Buy CDs in 1997, which is just now seeing release. Despite the acclaim and apparent chemistry of the flute duo, Dick and Gorn have not recorded together since, and neither have Hemingway and Gorn. But it’s always fireworks when Dick and Hemingway come together, evidenced by the awesome Tambastics (1992), Klaus König Orchestra’s Time Fragments (1994), or the more recent SLM Ensemble’s Source (2015).

Quite a bit here is composed, featuring dual-flute harmonies (e.g. “Dreaming Shree”), a kind of musical-theatrical call-and-response (e.g. “Kausi”), and head sandwiches (e.g. “Quiet Please”), and quite a bit is improvised, particularly Dick’s energetic flights and whimsical diversions into extended techniques and Hemingway’s quantum field peppering of hits in the sonic space. Few tracks are without a distinctly eastern feel, not just because of Gorn’s Indian Bansuri flutes but also, for example, Dick’s ghostly vibrato and high-pitched sustains recalling Japanese flute musics or Hemingway’s bright, crisp crashes on “Dreaming Shree” recalling Chinese gongs. When Gorn isn’t playing a slower harmony with Dick, his bamboo flutes often take a rhythmic role, with woody, breathy refrains providing a stable platform for the others’ explorations. Hemingway’s palette is certainly demonstrated here, with blown drums, shimmering metal, finger-drummed heads, fluted cymbals, muted skins, and a lamellophone or steel drum mixed with the typical sounds of a kit, which he often plays texturally, slipping in and out of rhythms, with two of those famous, hard-hitting Hemingway solos appearing on “Quiet Please” and “Disorder.” Nimble and birdlike, when not tethered to a composed melody or harmony, Dick is prone to tonal flights and soaring solos and erratic explorations into extended techniques including air notes, overblows, key clicks, vocalized multiphonics, and others.

The particular mixture of composition and improvisation on If Wolves Could Buy CDs - the latter of which can be scalular and rhythmically static here - results in what feels like a conventionalized Free Jazz structure that is mostly elevated by the colors each players brings to the fold, whether it’s extended techniques, the range of instruments and objects, or concepts and instruments from non-western traditional musics. Still, a solid release recommended for those interested in any of the players or fusion music along the lines of Codona or Ned Rothenberg’s Ghost Stories.

If Wolves Could Buy CDs is a digital-only release.