The last year saw a cluster of duo releases featuring guitarist Bill Nace. I cover most of them here (in no particular order, per usual), with the exception of a limited edition lathe cut with Samara Lubelski "Live in Belchertown" which was made for their 2019 European tour (per Discogs, I'll keep hunting for it), as well as the first 2020 Bill Nace solo release. For me, the guy is an amalgam of some of the best things that experimental guitar can be. While his playing is obviously indebted to folks like Masayuki Takayanagi, Derek Bailey, Keith Rowe, Sonic Youth, Rudolph Grey, and so on, his style is pretty unique. His range of collaborators are as numerous as they are varied, from Joe McPhee to Twig Harper to Tamio Shiraishi to Jessica Rylan to Kim Gordon to the artists paired with him on the following releases, for which I'll stop telling you things you probably already know and get into. 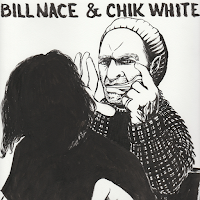 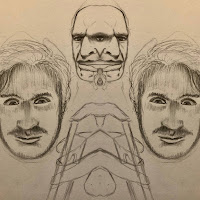 These first two are singles from Nace and the Nova Scotian artist, screenwriter, field recordist, and jaw harpist chik white (aka Darcy Spidle) comprised of three songs totaling about 8 minutes. Spindle has been refining his harp skills for the past decade and comes at the instrument with some of the most unusual and tasty techniques you're likely to hear. His experiments with throat mics, preparations, and mouth sounds are something I didn't even know I was missing, opening up avenues of timbre and texture unique to his practices. My introduction to his work as chik white came from a piece in the Wire (if I recall correctly) that Byron Coley had written, and a subsequent release on Feeding Tube records that compiles highlights from his out-of-print tape experiments. Since then I've listened to a quite a bit more of his work, some standouts for me being "malform", " time change ", his recent release with electronic artist Xuan Ye " Breath Fractals ", and of course these collaborations with Nace which I'm hoping will yield a full length recording at some point. We'll have to wait and see I guess.

On "Eels (All Parts)" Nace plays amplified acoustic guitar in a surprisingly rhythmic pattern that chik white smatters with all manner of clanging, twanging, buzzing goodness. The end of the track wriths and jolts for a few seconds of aftershock, a flicker of buzzing strings to close things out. "Wild Wire" is more along the lines of what I had anticipated initially. Nace's guitar playing is like a downed electrical wire hissing, sparking, and snaking along the asphalt as white's continuous amphibian throb provides presence, a witness at the scene of some accident. The stand-alone track "pit" is from the same long-distance collaborative effort as the previous two, and leans more towards the latter track's sparse, atmospheric sound art. Echoing throbs of guitar noise envelop white's reed twang before morphing into a high pitched din of feedback.

Get "pit" on Bandcamp:
https://chikwhite.bandcamp.com/track/pit 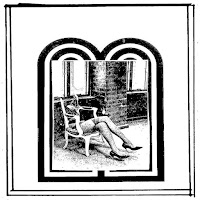 On this release from Post-Materialization Bill Nace is joined by guitarist Sandy Ewen, and let me tell you, it's as good as I hoped it would be. Both guitarists are known for their unconventional approach to guitar and if you're a fan of probing dissonance, grainy textures, and slicing guitar noise, then you've found your manna. My only complaint is that I wish it were longer. Ewen hails from Austin, TX and has several long running collaborations with the likes of Weasel Walter, Tom Carter, and Damon Smith in addition to her work as a visual artist and architect. In the relatively crowded field of prepared guitar players she is a stand out and seems to be on tour perpetually. I saw on social media that she recently joined Donald Miller (of Borbetomagus-fame) and his NOLA-based Death Posture for a collab, and am hoping that maybe someone was recording it.

The first piece crackles to life with lots of scrape and high pitch manifestation, the duo attacking their instruments with ferocity before a sudden shift to textural inspection. Low end emanations and groaning strings close it out. On the second untitled track Nace lays down a steady thrum while Ewen provides texture by dragging, scraping, and wiggling all manner of foreign objects across the strings. She has a fantastic ear for this sort of playing and an uncanny knack for summoning wild sounds from her instrument, especially for those appreciative of such. This release provides a toothsome morsel, but juicy enough to require the blotting of overflow rivulets from the corners of the mouth, uh, ear I mean. 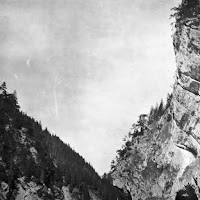 For those not yet in the know, Jon Collin is a British improvising guitarist currently based out of Sweden. I’ve followed him for a while now, but he’s been doing his thing for much longer and I’m still playing catch-up. His style is pretty unconventional and all his own really, though a vague touchstone I’ve seen mentioned before is Loren Connors’ early acoustic material. But Collin’s sound is really a different, more nuanced animal. Most often his releases are field recordings where the background is as much a participant as the artist is. I once saw someone write that his playing is like an Erstwhile Records version of American Primitive, which I thought to be an interesting description, if not quite representative. I read that he used to run a record label called Winebox Press, where he created cassette cases from discarded wood and only released as many cassettes as he had cases, which seems a little bit precious but also kind of interesting. In any case (no pun intended) I thoroughly enjoy his work and was excited to get my hands on this single long take, which per the title captures a collaboration between him and Bill Nace recorded at Brickbat Books in Philadelphia, PA in April of last year, which got a release on Collin’s current label Early Music.

As disparate as their stylistic leanings may seem from 10,000 feet (or maybe not) the two make a pretty fantastic pairing. Nace, never averse to a respectable drone session, provides a great discordant foil for Collin’s sparse, sometimes congenial/sometimes inimical musings. The recording itself does a great job of capturing the room ambience, which fits the bill for a Collin record. The artists fill the space with presence and saturate its atmosphere in a heady whirr of reverberating guitar chime and woozy slide drift. Collin’s playing (like Loren Connor’s) has a propensity for making my ear search for melody, only there never really is one in a strictly linear sense, which I think is a pretty interesting mental phantasm. The two conjure an astral racket from their instruments, applying loads of (tasteful) reverb and echo. Too discordant to be meditative but too introspective to be seditious, it occupies an atypical middle ground in which passive and active listening work analogously. Listen passively and there are parts that will shake you from your daydream, listen actively and torpor will overtake you. Very nice indeed.