I've been toting around a sizable library of music for a while now. My plan is always the same, commit some words to paper the screen about all of them. Ahh, plans. Now, I'm staring at a near insurmountable list of to-reviews. It is time to make some progress. So to begin somewhere, I'm going to start by focusing on one my favorite instruments, the guitar. But even doing this is daunting, and it's obvious that I'll need to sub-divide ... I will begin with solo guitar recordings, and we'll see how the future shapes up... 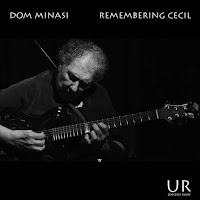 I think I've been carrying New York based guitarist Dom Minasi's album, dedicated to Cecil Taylor, in my pocket on a device of some sort for nearly a year. In this time I've actually gone through three devices - one took too long of a swim in a not-as-waterproof-as-advertised dry bag as I was kayaking, the other was a temp device with a pre-cracked screen that simply got worse and worse, until I got my latest gadget. But, I digress. The point here is that Minasi's album is one that I've become attached to. It was recorded not long after Taylor passed away, and on it, the guitarist allows the great improviser's influence shine through in naked, revealing light.

A concert or an album by Cecil Taylor was an outpouring of emotive melody and rhythm. The one and only time I was able to see him perform was the final concert at the Whitney Museum, and as frail as he was at the time, his music was still commanding and percussive. A famous quote from Taylor in fact compared a piano keyboard to 88 tuned drums, and compared Minasi, over the course of four improvised tracks, captures the relentless and effusive spirit of Taylor, but on just his six strings. Minasi's playing captures the tonal clusters, the intense bursts, and the moments of gentle melody, in general he reflects the velocity of sound that would emit from Taylor. The melody that evolves on 'Improv 3' is a real highlight, clear lines that seem to almost grasp the outlines of forming thoughts, but slowly grow more solid at the track progresses. As a contrast, there is the opening of moments of 'Improv 1' which is pretty much pure energy. The notes themselves take backseat to the flow of energy. 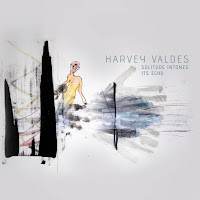 That's a hell of a title for the album. It totally makes sense, but please don't expect me to be able to explain it. Isn't that the power of a good title? What comes wrapped inside is even better. A collection of 18 short tracks that ooze with sophisticated melodies and thought through skeletal harmonic scaffolding.

Valdez plays an unusual Teuffel Tesla guitar, a seven string electric with a set of electronics that capture and re-create ambient sounds that were once 'natural' to the electric guitar, like the buzz or crackle of the pickups. However, these are adornments to the sound, which at its core is a rich array of contrapuntal chord melodies that immediately pull at emotional strings. Valdes' technique is an impeccable approach that mixes styles. For example, the classical track 'You See' contrasts with the a-rhythmic bounce of 'Crooked' and that with the nervous pluck of 'The Second Points the Way'. Each song has a personality of its own, but all fit into the family. Many of the tracks begin deliberately, asking the listener to hangout on for a moment, before unfolding its beauty ... kind of like a time lapse video of a flower blooming.

The moments and emotions that Valdes is able to capture in these short vignettes is rather remarkable. It's an album that should be savored, best listen to slowly. 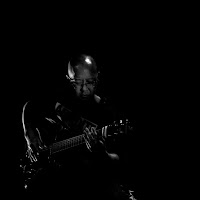 How best to begin? Han-earl Park's guitar playing has been fascinating to me since I first saw him play at show years ago at now defunct studio on Douglas Street in Brooklyn. If I recall correctly, he had a square bodied guitar that seemed to be somewhat modified, but moreover, his playing was unusually expressive. I cannot recall much else from the show at this point, except for the guitar playing. On Two+ Bagatelles, this same musical spirit that has stuck with me for so long, has been captured.

The tracks, 'Zero', 'One', and 'Two' are improvised explorations. 'Zero' is basically an opening salvo, a chord, silence, buzzy shards of sound. 'One' begins with a nervous pulse that sets the template for the track. It's a propulsive theme, a bit single minded, but at the same time very effective. The pulsations give way to slashing, which reveal numerous overtones, harmonics, and buzzes. The patterns evolve too, as the track progresses, overtones and abrupt rhythmic figures become set, only to then spawn new ideas. 'Two' is much different. Park is modulating and shaping the notes themselves. Each one is cut short, melodies becoming almost like the sounds of an 8-bit shower. Like the previous track, the form evolves but the approach remains set.

The short recording (approx. 16 minutes) is available through the Bandcamp store of the venerable London venue the Vortex. Purchase of the recording benefits the club. Park has another group project on the horizon as well. 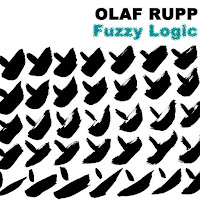 I have an acquaintance in Berlin who, at every show in which guitarist Olaf Rupp plays, says something to effect of "if there is one great injustice it is that Olaf Rupp is not world famous. But on the other hand, we get to hear him play two feet away from us in this little club." So, I guess I'll be selfishly thankful, and then do what I can to help.

Fuzzy Logic is an album of solo electric guitar improvizations that, like the title implies, falls outside being neatly defined. On his Bandcamp site Rupp writes: "I knew even then that this music will be ripped apart by many: the jazzers will say "that's just distorted noise", the Echtzeitmusik-people will once again nag at all those minor chords and the indie rock fans will shake their heads in vain looking for the beat. But unrootedness is also a power, a gift, a way." It's a good description really, the music has discernible structures - there are indeed chords and certain rooted elements, but then there is all of this fuzz that threatens to pull it all apart at any given time.

The opening track 'Insolent Coagulation' is a perfect example, beginning with fuzzed out drones, it leads to a slashing of harmonics and a minimalist accretion of notes. A mixture of percussive striking at the strings is followed by finger-picked swell of chord tones. The swell becomes a wave, breaking before they hit the shore. The title track shares some similar sonic elements, but here the sound heaves forward, before splintering into tubular sounding fragments. But no matter how out the sounds go, the guitar's sounds and shape is very present and integral in the music. 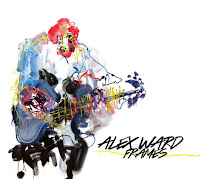 British clarinetist Alex Ward's had been cultivating an alter-ego as a rock guitarist, until encouraged by Steve Noble, he brought the guitar into the free improvization setting in the N.E.W trio. His concept and approach to the guitar has been advancing ever since.

Frames is his first solo recording on the instrument (proceeded by his first solo clarinet album Proprioception in 2017). Releasing a solo album suggests that you have confidence in your voice on your instrument, and listening to Frames, this is obviously the case. Ward's approach touches extremes, from spacious, angular melodies to fierce stomping chords, sometimes even working in concert as they do on the composition 'Staunch / At The End'. His electric guitar sound is often clean, with an edgy tone, it teeters on the edge of overdrive and often falls into it.

The recording starts off the with stop-start melodic fire balls. Ward links tonal clusters through short runs of single notes. It is not random, however. There is a method behind the music, and whether its composed or not does not matter, there has been much preparation before steeping into the studio. The next track, 'Frames', on the other hand seems much more composed. There is a deliberateness to both the tempo and the contrast between chords - unusual dissonances then relatively harmonious passages - that belie the thinking that went into the track. 'Allegreo Apprensivo' seems like yet another approach. It feels like the track is unfolding, almost discovering itself through rapidly juxtaposed passages.

Give it a listen, Frames is a really strong statement from Ward. 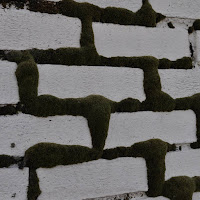 The Bandcamp site for multi-instrumentalist Eric Mingus states "The album consists of guitar improvisations, solo voice recordings that variously recall field hollers and sound poetry, and multi-tracked, harmonic-rich vocal drone pieces.", so I'll approach it from the solo guitar angle, at least at first. The album begins with 'Mist Rolls In', which features a thin, lightly amplified electric guitar. The track is contains a rough melody, perhaps sketched out before hand. This is followed by two vocal tracks, the first rather fascinating as Mingus uses grunts and the like, and the next more vocal-oriented, evocative with blues and folk overtones. 'Where the Water Meets the Air' is back to the solo guitar, where Mingus relies on rhythmic feel to carry the track. The approach to the guitar is not about precision or correctness, rather it seems to be about a feeling, like a poem where the words are meant to work on emotion, so do these short tracks, be it through the electric guitar, or vocals, or a little of both like the holy drone of 'Vox Un Humana.' 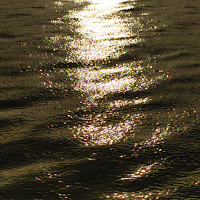 Sandy Ewen's guitar playing leans in the direction of soundscaping, or maybe even sculpting, as she likes to incorporate non-guitar related items into her music. The opening moments of her solo album's title track verges on the aurally painful - there is a high pitch drone that pans from left to right while static crackles from within. It's a sound with a physical shape - you can hear the structural support, as small balls of sound roll around like a roulette wheel. Electronic beeps, from a medical equipment nightmare, lurk around the edges, until they begin dissolving into the static as well. Later in the track, the beeps have become ghosts, and the vibration of a strings, its tone bending, filling this aural but visual plane. The next track 'Virginia Creeper', as you may have guessed, creeps. Small, visceral crinkles and a vibrating undertone keep the tension going, eventually drawing to a conclusion.

Each track of You Win is a sculpture. In fact, Ewen calls one of the tracks 'Serra', which most likely refers to the sculptor Richard Serra whose often out-sized works consist of thick industrial sheet metal bent into arcs and spiral forms. Like these forms, Ewen's sound sculptures take on a single idea at a time and bend everything around them. An unusual work that sounds nothing like a guitar, yet is made by guitar, somewhere deep within.

Thanks so much for listening, Paul.

Thank You Paul for this wonderful review. I truly appreciate it especially since today is Cecil's Birthday

Thanks for listening and for the review, Paul.