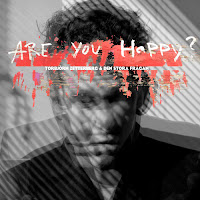 
Swedish double bass player founded his group Den Stora Frågan (in Swedish: the great question) in 2014 as he was returning to playing music after a four years stay at a Zen Buddhist monastery. Since establishing this sextet, now becoming an octet, it seems that Zetterberg's interests are much wider than existential-philosophical ones, but also about with big questions that concern such issues as composing vs. improvisation, orchestrating a small band as a big one, elements of memory and space and the importance of irony and humor in his music. Zetterberg is now a very busy musician, he co-leads the trio Orakel and the Svenske Kaputt quartet, plays in different outfits with with his partner, Portuguese trumpeter Susana Santos Silva, in Danish sax hero Mette Rasmussen's quintet ,and in American cellist Daniel Levin's quartet.

Zetterberg’s melodic abstractions of the big philosophical questions are played by great heavyweights - Silva, trombonist Mats Äleklint, label owner and reeds player Jonas Kullhammar, second reed player Alberto Pinton, keyboards player Alexander Zethson and drummers Jon Fält and Lars Skoglund the answers are not necessarily mystical. Are You Happy? Is the third album from Den Stora Frågan, following the self-titled debut (Moserobie, 2014) and Live (Corbett vs Dempsey, 2019). Its title is borrowed from graffiti that Zetterberg saw on a bench in the forest near his Stockholm house, and is indeed a great question. And the album was in the legendary studio Atlantis in Stockholm (where ABBA recorded some of their major hits), by the equally legendary sound engineer Janne Hansson.

The question: Are You Happy? defines the spirit of this excellent album. Zetterberg’s compositions play, literally, fascinating and highly inventive games with the listener. You think that you know where Zetterberg and Den Stora Frågan are, on only to find out that they are already faraway, exploring completely different territory. “Meningen Med Vad” sounds like it is heading in few opposing destinations, some reversing to retro-fusion sparks while others to Mingus-ian joyful celebration or New Orleans-ian marching band, but all delivered with great passion and energy. “Plingplongpiano” stresses more qualities of Zetterberg as composer, bandleader and bass player who leads the octet into chamber, melancholic tone poem. “Oraklet I Finnåker” (recorded before by Orakel) and “Nytt Hopp Över Atlanten” go full Mingus, including the powerful, sometimes sudden rhythmic moves, with great solos of Silva and with Zetterberg himself anchoring the reeds and brass choir commotion with subtle authority. “Drömmusik” navigates towards far and exotic territories and offers enchanting, purifying ritual, while “Påminnelser För Den Kortsinnade” suggests a mysterious, film-noir atmosphere, but most likely in Mingus’ imagined Tijuana. “Skygglappar På I Lusthuset” begins as a seductive, sensual dance that methodically becomes more intense and energetic.

Are You Happy? ends with the title-piece that offers a touch of reserved and fragile lyricism, but as this album was released on Valentine’s Day we can assume that Zetterberg has found his own happiness, even if he insists that this question is all he has to say about this album. But rest assured, even you can guarantee your happiness or at least some of it, if you would dedicate yourselves fully to the 43 minutes of Are You Happy?