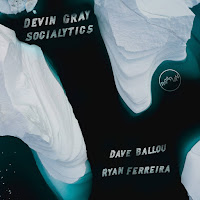 A few weeks ago drummer/composer Devin Gray released the thoroughly engaging Socialytics. The 24 minute release is also a powerful one, driven by his trio with guitarist Ryan Ferreria and trumpeter David Ballou.

Long time associates of Grey, Ferreria is a nuanced sound explorer who notably worked with Tim Berne's Snakeoil on the 2015 release You've Been Watching Me, and the renowned Ballou has played in Dirigo Rataplan and incidentally released a new album on the same day (see: The MacroQuarktet - The Complete Night: Live at the Stone NYC).

Just judging from the musicians involved should be enough to give you at least the idea that something special should be happening musically, but before I get into that, I'd like to start with album's cover image of a melting iceberg behind the ambiguous technical portmanteau of a title. Socialytics ... what to think? A comment on technology's incessant encroachment into our lives? The iceberg ... a reference to our seemingly inevitable ecological doom? Are we're standing on the melting ice, tweeting while the world burns? So many possibilities, but I should be careful, as it could also be just a neat picture, and here I am trying to guess Grey's impressions of the state of world.

However, what a state we are in! Most of emails lately begin with something like "I hope you are doing well despite the unusual circumstances" or whatever the acceptable Business English at the moment is, but like it or not, the Corona Crisis has wrought changes and accelerated previously creeping trends, exponentially. Digitization across every aspect of live: work (for those who can), schooling, concerts, and even social life, are all suddenly online. Pieces had been there before, but the tsunami came and now we're swimming in the pixels.

Ok, this was a digression, let's get to the music. 'Streambait' starts the album off with a threatening build up - the trumpet squeezes out a note that leads into a melody, which is shadowed by the guitar, then Gray adds a splash of percussive color, and were into this expectant, atmospheric space. Ferreria's tone is liquid, and his chords choices are open ended and the arpeggios don't easily resolve.

To my ears, the tune 'Chatbot' seems to contain some of the systematic logic that can result in surreal conversational hiccups, like you may experience with a  actual chatbot while you try to resolve an issue with an online order. The tune begins with Ballou offering a clear melodic statement and Ferreria responding using some sort of ring-modulating effect, which in turns helps create (possible unwittingly) an allusion to AI chatting back. They are communicating, but on different wavelengths. The track also gets pretty intense, like the man and the machine are getting worked up.

It is possible to go on and on, but in the spirit of the album, which in a quick 24 minutes makes quite an impression, I'll come to a quick conclusion. The read on Socialytics is that Gray has pulled together another tight, imaginative trio able to help extrapolate and amplify his musical ideas. You can almost imagine this long EP length recording as a dashboard of indicators of a musician with a lot of intriguing thoughts - musical and otherwise - to share.