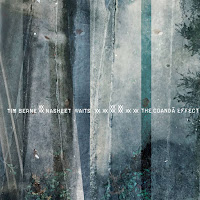 “The Coandă Effect is the tendency of a stream of liquid – or air – to stay attached to a convex surface . The jet keeps the object some distance from the exhaust and gravity prevents it from being blown away.

The album is spilt into two pieces of uneven length, the first – ‘Tensile’ – clocks in at a cool 39 minutes. I’d envisioned a slow building progression over a track of such duration but Berne is up to 10. within three mins of the opening note; blowing with sustained intense poise, but never empty abandonment. Floor toms cascade into flowing propulsive momentum, Waits lays forth a condensed textural palette – like the concept was to drum out the deeper tones of the kit. Tolling out and prodding the evolving base rhythm.

As in his epic performance on Rob Brown’s live album Unknown Skies (a bass-less trio) Waits plays with particular intelligence to cover the full tonal sound space, with emphasis on the kick drum and floor toms creating huge rolling presence. He deploys a lot of ‘Africa’ in his mode of playing in the first tom-heavy ‘solo’ – with a deep break that could be channelled direct for Ghana, or perhaps Nigeria. This is Waits in his Tamarindo-style of playing – but at faster tempo, matching Berne’s burn. Flowing. Pushing in flow.

As the saxophonist advances and expands into the half-way mark of ‘Tensile’ he plays with increasing conceptual repetitions and urban calculation, before slowing into a solo space – searching and questioning the emotional edges of some oblique city environment, yet here with more spontaneous urgency than his recent ECM work.

A second drum space works up a deep, revolving build and reaches an evocation of feeling through cymbals. The drum level perfectly balanced in the mix, the live recording mastered by David Torn.

As ‘Tensile’ enters its last passage, intense angled spirals of alto sear into the apex of the piece, circling into one another before settling into a perfect descent. With the duo appearing surprised that they have been creating at such a level for nearly forty minutes.

In its mere ten minutes, second track ‘5see’ unfolds amongst skitterish brushwork and a more abstract tonal tract before the drumming unrolls into itself until it sounds like it’s being played backwards. Berne tightens into a circular snake-horn call with Roscoe Mitchell Chant-like revolutions; cells of notes repeated over and over, introducing minute variations of enduring hypnotic spirals right into its pin-point resolution.

A wonderful set – and recording – capturing in its most concentrated form a duo of unique power and intent: overflowing with intricate ideas.

Recommended – at volume – from a balcony, or through headphones – out walking the deserted city.