Gordon Grdina Makes Music That Is Important for Humanity

The Canadian, Vancouver-based guitarist and oud player Gordon Grdina knows that making art is a political act, especially in today’s world dominated by xenophobic and white supremacist leaders. This musical-political act becomes even more important when your art draws inspiration from one of the Muslim world and Middle-Eastern ancient musical traditions and asks to enrich jazz and free-improv musical universes with these legacies. 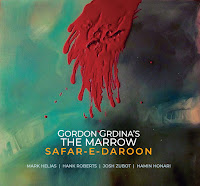 Safar-e-Daroon was recorded in Vancouver in October 2018 and features nine compositions, six are credited to Grdina and three for Helias. The album is structured like a sonic journey where the meticulously arranged compositions continue to add new meanings and insights to the musical adventure and sketch a compassionate, rich vision. The Marrow play like a mature, working band, with a great sense of passionate playfulness, fluidity and precision, and poetic elegance.
The opening, title-pieces already sets the musical territory, an Arabic maqam that developed naturally into an Iraqi folk georgina 10/16 rhythm, lead by Grdina who solely plays the oud on this album. Helias’ “El Baz” highlights The Marrow tight, intense but swinging dynamics. “Mini-con” was conceived after talks about fake messiahs and semi cults led by charlatans and “their ability to manipulate people is based on consistent cons that have some shred of truth to them. It’s like many little mini-cons leading to a big manipulation”. Here, as on “El Baz”, violinist Zubot takes the lead with Grdina and offers a fiery yet lyrical solo that navigates between colorful and imaginary, lost kingdoms, Eastern and Western ones. Helias “Calling on You” enables Grdina and Zubot to develop a new kind of interplay, raw, and free-improvised by Zubot, but more rhythmic and in the Middle-Eastern tradition by Grdina who recognizes Helias experience with famous Lebanese singer-oud player Marcel Khalife.

“Shamshir” stresses the crucial role of Iranian-Canadian percussionist Honari and cellist Roberts who weave together an engaging melody that unites Arabic percussive traditions with Indian-like raga cello solo. “Convergence” expands the musical journey to Africa where Grdina’s oud invokes an innocent and touching folk melody that pays tribute to the cyclical songs of Egyptian oud player Hamza El Din and Malian guitarist-singer-songwriter Boubacar Traoré. “Illumination” brings to the fore Honari who leads The Marrow while creating a sensual vibe with the daf, his Persian-Arabic with metal ringlets. Helias’ short “Outsize” challenges The Marrow with its focus on an open and free contrapuntal approach that injects an element of ambiguous tension. Safar-e-Daroon ends with the most beautiful, choral-like song of “Gabriel James”, based on a rhythmic riff that Grdina’s 4-years-old son strummed on the oud, now arranged as a dream-like, harmonious melody. 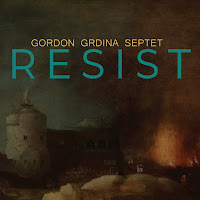 Resist unites Grdina with close comrades - his East Van Strings quartet’s violinist Jesse Zubot (the brother of Josh Zubot), violist Eyvind Kang, cellist Peggy Lee; drummer Kenton Loewen (his partner in the Peregrine Falls duo and the Grdina Trio), bass player Tommy Babin (who also played in the Grdina trio), and adds versatile sax player Jon Irabagon, who released the album on his label. The album was recorded in July 2017, a day after the sextet played its first and only performance at the Vancouver International Jazz Festival.

“It seemed like there was a huge change happening socially and politically,” Grdina says about Resist. “Xenophobia, homophobia, and racism were raising their heads again. I wanted to dedicate this music to everybody that’s fighting against these ideas all the time, whether they’re doing it as a defendant or just at the dinner table. Making art is a political act; it’s important for humanity, to make our lives better and to express our resistance to these hindrances”. The album cover reflects this notion and borrows Hieronymus Bosch’s famous painting Christ’s Descent into Hell, created around 1550, and depicting Christ tearing through the gates of hell to save the souls that are wrongfully condemned there, as he falls upon a land of pure chaos and danger.

The 23-minutes ambitious title-piece suite radiates faithfully this melancholic spirit with its somber, chamber arrangement for string instruments. Grdina, who alternates between guitar and oud and appears only six minutes after its introduction, let the string instruments dominate this piece. But his evocative oud playing, as well as Irabagon urgent and intense cries, stress the even further the mournful atmosphere and the call for resistance. The following, shorter four pieces offer more optimist perspectives, beginning with the lyrical and emotional solo miniature “Seeds”; “Varscona”, titled after an iconic theater in Edmonton, Alberta, with Irabagon leading and the interlocking rhythmic games of Loewen and Babin, is a post-bop, playful celebration; “The Middle” finds a delicate balance between the intensity and powerful rhythmic patterns of Irabagon, Loewen, and Babin and the more abstract and associative improvisations of the string section, including Grdina himself; The last “Ever Onward” attempts to suggest a better future with a moving, engaging melodic theme based on Middle-Eastern scales, delivered by Grdina on the oud, and definitely adds “something beautiful into the world”, as he concludes. 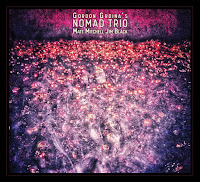 Grdina teams up with New York-based pianist Matt Mitchell and drummer Jim Black and presents a new trio that recorded its debut album after a short Canadian tour. Grdina wrote six compositions with Mitchell and Black in mind, and in a way, this body of work reflects the seminal influence of one of his musical heroes, Tim Berne, a close collaborator of both Mitchell and Black.

Grdina’s compositions suggest episodic compositional themes that leave plenty of space and freedom for improvisation and personal contribution and transform each one into a challenging journey, a nomadic process. Grdina usually sketches snaky-labyrinthine, melodic lines on his electric guitar that call Mitchell and Black to inject more jazz-based harmonious and irregular rhythmic variations. This way, the trio builds its layered dynamics in an organic manner before it locks on a tight, irresistible groove.

The title-piece stresses the precise balance of this trio and its profound rhythmic sense. The subtle “Benbow” develops beautifully the delicate balance between the melodic core and the immediate and sudden improvisations as well between intimate introspection and the powerful stratospheric coda. Black takes the lead on “Thanksgiving” and the trio builds the groove from the bottom up, intensifying by the determined work of Black. Grdina plays the oud only on the last, lyrical “Lady Choral” where the trio goes into a seductive, nomadic journey, highly playful and exotic one.