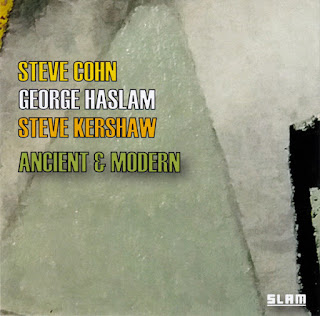 Slam is another one of those off the radar labels that even though they produce a lot of recordings , the quality of them is always excellent. Watch out for the new batch of them, by the way, because there are some very good Greek improvisers involved.

Ancient and Modern was recorded at All Saints Church in rural Oxfordshire and is the burial place of George Orwell. Hence one of the tracks is called Orwell’s blues. The trio consists of George Haslam on baritone and alto saxes and tarogato, Steve Cohn on piano, shakuhachi shofar and hichiriki (all three of them wind instruments) and Steve Kershaw on double bass.

The instrumentation of this trio could easily, one might say, saturate this CD with the dominating presence of the wind instruments. But this isn’t the case in Ancient and Modern. Cohn's piano is a strong presence throughout the recording, many times in pretty enjoyable melodic duos with Haslam’s saxes or building up a backbone for all of the tracks along Kershaw’s bass.

Ancient and Modern seems knee deep in the jazz and blues tradition. In tracks like Orwell’s blues, Blue Monk (quite telling indeed) and Nostalgia in Times Square (a Mingus composition) there’s this feeling of nostalgia for times past going in parallel ways with the rural time-is-a-relative-term feel of the church and its surroundings.

The feeling that permeates throughout this recording is one of a bluesy relaxed atmosphere with a few discreet outburst like in the track 'Tarogato Fire'. The wind instruments of both Haslam and Cohn serve as the guidelines for the piano to paint clear and strong melodies throughout. Most of the tracks seem to have been built by the strong (and always fruitful) presence of the piano.

Ancient and Modern proves really true to its title. A very clear and true look on traditional, like the fine interpretation of Scarborough Fair, English music and a fresh approach on new (but at the same time “old” ) jazz and blues with a very interesting approach at some standards as well. Ancient and Modern managed to transport me to rural Oxfordshire which is a miracle by itself in these dystopian days. Thank you guys.