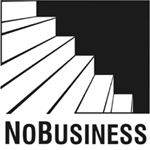 By Martin Schray
The releases from the Lithuanian NoBusiness label are often reviewed on our site. The reason is their reliable quality, the program of the label is varied, yet focused. Apart from new releases, they’ve been digging and reissuing old or previously unreleased music of the New York loft scene era in the 1970s (Sam Rivers, Ted Daniel, Melodic Art-tet etc.) as well as Japanese free jazz (Masahiko Satoh, Sabu Toyozumi; Kaoru Abe and many others). Regarding new releases, they’ve recently become interested in free jazz from Israel (Albert Beger and Shay Hazan). Over the years they’ve seemed to have developed a special liking for trios and some favourites artists have emerged - like Howard Riley, Bobby Bradford and Mats Gustafsson. Despite the consistent coverage of the label’s music it’s impossible to review all the albums, some just slip under the radar. While I’m writing this round-up I’ve just discovered that there will be new releases soon. Here’s a quick overview of some we’ve recently missed. 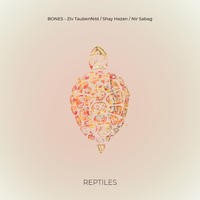 Bones is a trio that belongs to the above-mentioned Israeli scene. It consists of bass clarinetist Ziv Taubenfeld, bassist Shay Hazan and drummer Nir Sabag. Reptiles offers seven relatively freely improvised, yet well-structured tracks, which are dominated by the overall sombre tone of the instruments, especially Tauberfeld’s raw bass clarinet stands out. Whenever the music tends to become too melancholic and lyrical, Tauberfeld uses calculated subtle outbursts to put the improvisation back in its place. A good example of this is the first track of the album. “Moondoctor“ is constructed around a 10-note theme on the bass, which is surrounded by the bass clarinet, while the drums are just sparsely involved. Only after two minutes something like a groove is established. In the meantime, the bass has left the theme and concentrates on stoic riffs that work like an anchor. At the end of the piece the motif of the beginning is taken up again, it has secretly sneaked back into the improvisation before. The construction around fixed blocks characterizes the compositions on Reptiles. In the center there are three solo pieces, “Reptiles A“, “Reptiles B“ and “Reptiles C“. Ideas are created here, which are then developed further by the three musicians when they explore new territory. Doing this, Tauberfeld hardly uses overblown sounds, he sticks to the limited articulateness of his instrument (if you need a reference, Jimmy Giuffre comes to mind).

Reptiles is the trio’s third album, in 2016 and 2017 they released two albums on Leo Records. They’ve developed a very nice individual sound (I must admit that I’ve always had a soft spot for bass clarinets) with their supercool aesthetics and subdued intensity. A band to watch out for in the future.

Reptiles is available on vinyl (in a limited edition of 300) and as a download. 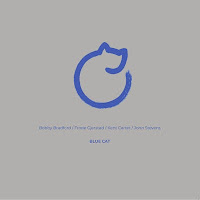 Bobby Bradford is one of the most featured musicians on NoBusiness, Blue Cat is already his sixth release on the label, among them such great albums as Kampen (2012) and The Delaware River (2014), both with Norwegian saxophonist Frode Gjerstad, who is with him here as well. Once again the US-American version of free jazz meets European improvised music, this time with Kent Kessler on bass and John Stevens on drums.

The music is like an integrated whole, because the Europeans enjoy to delve in traditional free jazz. The themes presented by the saxophone and cornet caress each other. Again and again melodies are only hinted, they serve as a springboard for improvisations removing very far from the starting point. Bradford, in particular, plays melody-saturated lines, often slow and rooted in the blues, which are picked up by Gjerstad in an abstract way. Kessler's bass, on the other hand, vacillates between space-creating textures, trenchant notes and precise swing, and John Stevens interestingly also gets into it. Stevens, the great abstractor, is perhaps the biggest surprise on this record, because he often remains very concrete, he swings and grooves extensively. The transitions between the solos are beautifully designed, since an instrument doesn’t just step out, but the sax and cornet become virtually one in a kind of cross-fade. In general, this is a very accessible record that is strongly rooted in jazz and only occasionally breaks out wildly.

My favourite piece is “Blue Cat Part II“, whose melody reminds me of “Lonely Woman“ at the beginning, but Stevens’s dark drums give the spiritual theme an uncanny touch. Bradford’s cornet is delicate, almost fragile here, which is encouraged by his fellow musicians acting very reservedly. The climax of the piece is the change in lead of the two winds after about three and a half minutes, which subtly shifts tempo and melody.

The question now is: Why only three and a half points? Unfortunately, there is something that noticeably clouds the listening pleasure. Over the course of the whole record the audience can be heard very loudly in the background, obviously the Albany, the London club in which the recording was made, has (or had) a bar. Especially in “Blue Cat Part III“ the conversations during a quiet duet of the reeds are extremely loud (basically in silent parts in general), the music actually fights against the chatter. If you know Peter Brötzmann’s Solo at Dobialab , you get an impression of how disturbing this is. The music is often spoiled by it. A pity. Then again, the album has my favorite cover of the year.

Blue Cat is available on vinyl (in a limited edition of 300) and as a download. 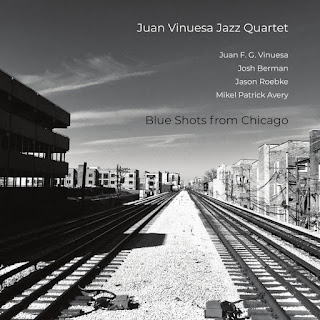 When we discuss albums on this website that feature saxophone, trumpet (or cornet), bass and drums, we often refer to Ornette Coleman's Ornette! Even if this is a commonplace, it makes sense for Blue Shots from Chicago, saxophonist Juan Vinuesa’s fourth album. In contrast to the Blue Cat, an album with the same line-up discussed above, this release rather refers to its great predecessor from 1962. Vinuesa's band includes cornetist Josh Berman, bassist Jason Roebke and drummer Mikel Patrick Avery, three musicians at the center of Chicago's vivid jazz scene.

Blue Shots from Chicago isn't as rough as Ornette!, the album is much more accessible, the heads are more melodic and mellow, the improvisations less overbearing. Vinuesa's sax is fierce and excited, and provided with a kind of epiphanic overtones, but then as well cool in the style of Lee Konitz. Roebke's bass is skillful as it is equipped with a tilting, creeping subtlety. Avery is a very reliable swinging drummer, but he can also play freely (e.g. in “In Paul's Mirror“). Josh Berman is the most seductive musician throughout, charmingly he adds short moments that could pass as swinging blues (especially in “Red Line Ballad“). He simply sounds wonderful here – contributing some heartbreaking moments. If you think this sounds cheesy, there are always enough skronks in between to avoid monotony or sentimentality. Tones are preserved, whether fragile or booming, before they are broken off at the edge of shrillness. Blue Shots from Chicago is another impressive record from musicians who know this racket exceptionally well. Of course, it doesn't match the boldness and shock value of Ornette! at the time, but it's not about tearing down old habits, but rather about exploring an already mapped territory in a more detailed way.

Juan Vinuesa has been living in some jazz hotspots in Europe, e.g. in the UK, Copenhagen and Amsterdam. Moreover, he has spent two years in Chicago mixing with the city's cutting edge musicians and, judging by this recording, this must have been a very fruitful stay. His new recording displays a great band, hopefully there will be more of them in the future .


Blue Shots from Chicago is available as a CD. Watch a very nice video here.


You can listen to and buy all the music of this review on the label’s Bandcamp site: https://nobusinessrecords.bandcamp.com

If you’re from the US, Bruce Gallanter’s Downtown Music Gallery usually carries all the NoBusiness stuff: http://www.downtownmusicgallery.com
Paul on Sunday, May 31, 2020
Share

Re: John Stevens ability to swing, although he is probably best known for his work with the Spontaneous Music Ensemble and duo recordings with Evan Parker and others, he was also part of very different groups such as John Steven’s Away, an Ornetteish quartet (“New Cool”, 1994), even the John Stevens Dance Orchestra ‎– “A Luta Continua” (1994), which features John Martyn on vocals and guitar.

The “Blue Cat” group was one version of the Detail trio, which produced some excellent albums with different bassists, plus Bradford. NoBusiness released “Day Two” last year and “Way It Goes/Dance Of The Soul” by Detail Plus [Frode Gjerstad, Bobby Bradford, Johnny Dyani, John Stevens] (1988) deserves a digital reissue.

Yes, Detail is a superb band.
I didn't know about the John Stevens Dance Orchestra and that he even played with John Martyn. I'll give that a listen right away, if I can find it somewhere on the internet.

We fixed it, Mulot. Thanks.