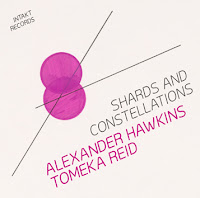 One of the enduring appeals of this type of music is its ability to unexpectedly surprise the listener. The first time I listened to Shards and Constellations was late at night on headphones, maybe reading a book, while still processing initial impressions of this pairing of two blog favorites. My first encounter with Hawkins was here which was prominently mentioned in the Best of 2013 list; that got a lot of repeat plays. Then followed this and this so I'm a fan striving to be a completist (so much music, so little time...). Tomeka Reid was first encountered on the blog here and here before leading her own groups. I've seen her perform multiple times and have been increasingly impressed with each iteration.

So I was listening to it and enjoying the interplay in the jointly composed pieces for five cuts when something happened that made my eyes open wide; a lush and moving constellation of sounds that contrasted greatly to the sparse but engaging shards of notes that preceded it. I quickly looked on the excellent liner notes by Anthony Davis (more about them later) and saw that it was a Muhal Richard Abrams composition, “Peace on You”, from a 1975 solo piano release Afrisong on Trio Records. Although it adheres closely to the original, the addition of Reid’s cello augments the repeated melodic plaintive beauty in a way that transforms it into something exceeding the sum of the parts while still being respectful of the composer. It's a song that will stay in your head for days.

The only other previously released song is a version of Leroy Jenkins’s “Albert Ayler (His Life Was Too Short)” from the 1978 Black Saint release The Legend of Ai Glatson with Reid assuming the violinist’s voice. You might think with Tomeka’s long association with AACM musicians that she was the driving force behind these first generation adaptations except the Convergence Quartet featured this on their 2010 Clean Feed release, Song / Dance, with trumpeter Taylor Ho Bynum playing Jenkins’s part and Andrew playing very closely to this version. So lacking information stating otherwise these were joint decisions by both participants executed movingly.

As for the joint compositions by Reid and Hawkins, bookending the album with “If Becomes Is” and “Is Becomes If" implies a coherent discrete musical statement in the era of streaming services and playlists. The latter cut is particularly moving as both musicians prepare their instruments effectively for extended voices, particularly Tomeka getting what the liners describe as a kalimba type sound but I thought of a more resonant steel drum hint. “Sung Together” features rapid fire skittering bow work underpinning piano meanderings with a persistent staccato high note sporadic pattern which ultimately resolves into something only hinted at previously in a marvelously developed piece.

Liner notes are a tricky thing. From a utilitarian standpoint they're part of the total work and ideally should provide information and insight without being overly fannish. Intakt, in Irene Schweizer’s rerelease of Wild Señoritas originally on FMP, featured an interview with the musician in which she reflected on the performance: “There is always the danger that one wants to consider older recordings as something unfinished, immature, and perhaps something not so very precise. When I listened again to the recording before this conversation, I was astonished at how I was able to very precisely get some things in a nutshell, and how close to me this music is. I also heard some musical patterns, themes, and quotes that I still touch on today - although in a completely different way. I was also surprised at how much I was playing on the strings then. At the time, I was fascinated with exploring the possibilities of inside-piano playing, and ignited fireworks of sound.” I thought that was a refreshingly honest and confident reflection by an accomplished musician on earlier work and have considered it the gold standard in liners. Maybe a new category should be established for other musicians describing a release because Anthony Davis enhances the work with a thoroughly engaging musical description of each cut while not confusing the non player. Unfortunately for the reviewer, they're so effectively descriptive they become hard to avoid repeating. Plus he gets bonus marks for modesty by not pointing out that he was the pianist on The Legend of Ai Glatson.