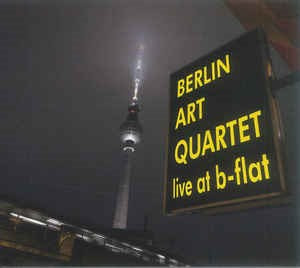 Of course, it was the band’s name that attracted my interest. It’s obvious that the musical inspiration of the Berlin Art Quartet refers to the New York Art Quartet, a pioneering, albeit short-lived band in the mid-1960s*. They consisted of saxophonist John Tchicai, trombonist Roswell Rudd, percussionist Milford Graves and various bassists (among them Reggie Workman). At their time the New York Art Quartet presented a genre-defining vision of early free jazz, until today you can feel the electricity in the air from those days when you listen to their albums. In particular, their music included a melange of flavors: Ayler-esque howls, Dolphy’s cool abstractness, Ornette’s sublime melodies. The free-for-all spirit of those days gives their music a timeless quality. In its inconsistency, the New York Art Quartet has created some of the most powerful pieces of music from the free jazz underground of the early 1960s.

The Berlin Art Quartet offers the same instrumentation as the seminal New York combo. It’s Matthias Schubert on tenor saxophone, Matthias Müller on trombone, Matthias Bauer on bass and Reinhard Brüggemann on drums. The latter founded the band in 2013, then with Johannes Bauer on trombone. After Bauer’s untimely death in 2016, Matthias Müller replaced him (in my opinion a very wise decision). However, if you expect the Berlin band to be a mere retro copy of the New York Quartet, you’ll be disappointed. The band’s name is more like a tribute, a direct musical connection is not intended. On the other hand, of course, “we are all linked to tradition“, as Matthias Müller points out.

There are pieces on Live at b-flat that are clearly located in the here and now and which are more committed to a European improv tradition, e.g. “Bewegung/Motion“. In this piece all musicians experiment freely and try to use the extended sound possibilities of their instruments. In doing so, they smack, gurgle, whimper, whisper, rattle, bump and shuffle through the eerie soundscape they create. Even though a tighter structure appears in the second part of the piece - with the walking bass in particular being most likely rooted in the jazz tradition - one would hardly feel reminded of the New York Art Quartet if it wasn't for the name of the band. Then again, whether intentionally or not, there are some similarities. Brüggemann introduces pieces like “Entfaltung/Unfolding“ and “Gipfeltreffen/Summit“ with additional percussive equipment like rattles and bells, he focuses on the drums (cymbals are hardly used). This way he creates a darker environment, which is similar to Milford Graves’s style. The melodies and riffs are thrown back and forth between Schubert and Müller, the chemistry between the two guarantees a relaxed approach to the musical material. That is also reminiscent of Rudd and Tchicai. One of the album's touching moments is the use of abrupt silence when tenor saxophone and/or trombone step out of the wild chirping, for example when they just blow through their mouthpieces and turns violent excitement into controlled calm.

A further reminiscence to the past is the political dimension of the music, as claimed by Brüggemann. The drummer was socialized in the historical free jazz of the Sixties and believes that this music is urban and should express the individuality of a free city citizen. The music should therefore be anti-dictatorial and pro-democratic. "No dictatorship can get along with our music," he states in the liner notes. The New York Art Quartet also had a political dimension, however this was a more concrete one. Beat poet Amiri Baraka was considered the secret fifth member of the band and appeared on a single track on the group's first album. “Black Dada Nihilism“ is a poem that sparked instant political controversy for its violent imagery.

To sum up, what can actually be observed is the fact that the Berlin Art Quartet tries to present a state-of-the-art version of modern improv. From the nucleus of a movement, reactions emerge, creating a musical space of action in which the improvisations take surprising turns. The great quality of this music is that it embraces these twists and turns.

Live at b-flat is an excellent album.

* There was a short reunion for some concerts at the beginning of the 2000s, when they even opened for Sonic Youth.

Live at b-flat is available as a CD.

You can buy it from the label: https://shop.unisono-records.de/produkt/audio-cd-berlin-art-quartet-live-at-b-flat/

You can watch the band live here: