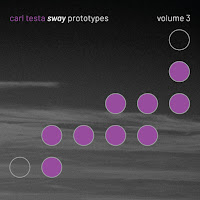 Carl Testa continues documenting the possibilities of his electroacoustic environment, Sway, with two forty-minute tracks on Sway Prototypes Volume 3. As I mentioned in the review of Volumes 1 & 2 , which ended up being a personal favorite of the year , Sway feels like Testa synthesized Braxton’s various musical systems into a personal vision with rare depth that might be at the forefront of interactive electronic performance. While losing the initial impact of hearing the system in the 2017-2018 recordings of Volumes 1 & 2 might depreciate the enthusiasm here, the 2019 recordings of Volume 3 take the project in meaningful directions and establish possible pathways to look forward to, whether it’s newly-heard interactions with Sway or nuanced interactions due to new musicians in the ensemble.

Track 2, “Midst,” features the primary sextet of Volumes 1 & 2, with Testa (contrabass, electronics), Erica Dicker (violin), Junko Fujiwara (cello), Louis Guarino Jr. (trumpet), Andria Nicodemou (vibraphone), and Anne Rhodes (voice). As a result, a lot of the acoustic dynamics and timbres are similar but this set features more extended technique from everyone but Nicodemou and Testa and, whereas Guarino Jr., Nicodemou, and Rhodes really shone in the previous volumes, this volume balances the spotlight across the ensemble, with Dicker and Fujiwara finally coming to the forefront for some time to really shred their strings. Like the last volume, Rhodes’ voice is often heavily modified (she must know how to readily trigger Sway) almost instantly, so that the delayed, distorted, etc. effect is overlayed while she’s performing. Unlike the last volume, effects on the other musicians are delayed to the point that they are often not heard until those musicians stop playing, and the acoustic signal is often so heavily modified that it’s only identified by a similar movement and cadence to the original. So what happens is that the musicians currently playing acoustically might be improvising with the electric ghosts of the previous musicians that played. Of course, more than one musician is playing at a time, so the result is a kind of funhouse maze with several people running through rotating warped mirrors, or a delightfully dense piece that’s structurally, timbrally, and conceptually weighty enough to keep you coming back. Though the kind of electroacoustic mimickry I described for the first two volumes isn’t as prevalent here, the dreamlike state or psychedelia this system can induce still is with these newly-documented interactions.

Track 1, “Shroud,” brings back only Testa and Rhodes and introduces Alejandro T. Acierto (contrabass clarinet), Hanna Brock (violin), and Aaron Getsug (saxophones and clarinet). None of the new musicians have recorded previously with Testa or Rhodes and they’re all relatively up-and-comers. Readers might remember Brock from Ben LaMar Gay’s Downtown Castles Can Never Block Out The Sun and Getsug from his recordings with John Tchicai or Joshua Abrams and Hamid Drake in Ernest Dawkins Chicago 12. While the electroacoustic mimickry of volumes 1 & 2 isn’t really here either (with a notable exception of sax and electric voice sometimes blending together), the acoustic mimickry is, with the contrasting range of bass and violin mirroring that of the clarinet and contra clarinet, and with the contra clarinet sometimes sounding like the bass, to the point that I think the ensemble is trying to trick or game Sway in some way. However, the electric environment produced is drowned in reverb at certain points in the track. Getsug’s psychedelic sax is usually swimming in it, to the point he sounds like a multi-tracked Dickie Landry or Trans Am’s “1999.” It’s fun but out of control; cheesy but in a good way. Besides a spirit of letting loose, this new ensemble can bring out a cinematic, cathartic quality in the music, like around the 10-minute mark, when Brock’s and Testa’s arcos emotively waltz together before being met with a kind of kitschy sax solo and complimenting contra clarinet. The mood of this ensemble is totally different than the primary sextet otherwise featured despite playing within the same framework, meaning that this system can always remain fresh with a few new perspectives.

The various students of Braxton each have their esteemed projects and I believe that Testa has finally developed his with Sway. The density, humor, innovation, psychedelia of this project surely make this essential listening.

Sway Prototypes Vol. 3 is available digitally and on CD.