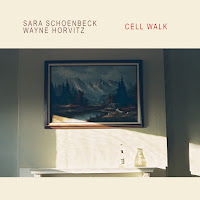 Seattle-based pianist-composer Wayne Horvitz and Brooklyn-based bassoonist Sara Schoenbeck, known for her work with Anthony Braxton’s Tri-Centric Orchestra and Wet Ink new music ensemble, met for the first time twenty years ago at the Time Flies Festival in Vancouver, Canada, and since then kept up the collaboration. Schoenbeck became part of Horvitz chamber jazz Gravitas Quartet (with trumpeter Ron Miles and cellist Peggy Lee) and later of the ensemble Some Places Are Forever Afternoon (based on the poems of Richard Hugo), joined performance of Horvitz’ fusion quartet Sweeter Than The Day, and other new music, orchestral works of Horvitz, including for a piece for orchestra and a string quartet These Hills of Glory.

Almost twenty years later, in July 2019, Schoenbeck and Horvitz finally recorded a duo album at the Pyatt Hal l in Vancouver, enjoying the hall’s great acoustics and its Steinway D piano. A few tracks were recorded six months later in Brooklyn, with amplified piano and electronics added to the mix. Cell Walk references Cecil Taylor’s album Cell Walk for Celeste (Candid, 1988), and Horvitz's piece by this name was written in memory of Taylor just after he passed away. The 17 original pieces of this album highlight the duo’s great affinity for experimenting with unorthodox extended techniques and textures, compositional strategies, and improvisational ideas, always in the service of beautiful melodies and songs.

The profound, common language of Horvitz and Schoenbeck captures the listener immediately. There is a rare kind of relaxed intimacy and a natural fluidity in their interplay. There is also an expressive synergy that is focused most of the time on reserved, lyrical tones, and an organic and transparent basis that keeps enriching the melodic, chamber conversations. Schoenbeck demonstrates the full sonic palette of the modern bassoon as a classical instrument that feels at home in many musical arenas, especially on Horvitz’ playful homage “For Lou Harrison”, her own composition “Deep Well Well”, and the open improvisations where she and Horvitz added subtle electronics. And Horvitz and Schoenbeck sound as simply enjoying crisscrossing the worlds of free improvisation (only four pieces here) and carefully notated chamber, new music, and jazz, but without falling into distinct patterns. Some of Horvitz’ canonical favorite compositions are interpreted here as “No Blood Relation” (from The Snowghost Sessions, Songlines, 2018), “Ironbound” (originally performed by Sweeter Than The Day, Songlines, 2001), and the earliest “American Bandstand” (from the self-titled album, Songlines, 2000), all performed with grace and elegance, beauty and imagination.