You wonder what's happening in the world. Viruses and Violence. Death and Injustice. Racism and Madness. There are few words that can capture what is happening. There are few words that can capture the danger and the strangeness of the isolation we live in. The lockdown has proven to be a source of inspiration for musicians, with no concerts and no travel, options are limited, but to be productive and creative in other ways. Below is a list of albums that were released dedicated to corona pandemic, its isolation and its consequences for people.

Some music is evokative of the terror of the times, other music offers surprising moments of "light in the darkness". Check them out. 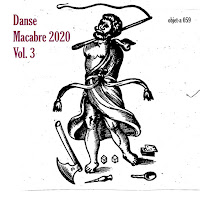 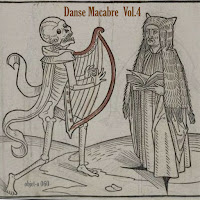 On April 13, we published this post on Gianni Gebbia's initiative to revive the Danse Macabre, the 'danse of the death', as a collective creative project for musicians to share and improvise on each other's music through digital exchange of material.

The collection offers an amalgam of styles and genres, from classical - a beautiful sarabande of viola da gamba and theorbo - over rock music, solemn solo trumpet to electronic turntable madness. If on the previous albums some stylistic unity could be found, it is absent here, apart from the common context of the corona pandemic. The strength of the album is also its weakness, or the opposite. As a listener you are forced to be more open to music that is normally well below your attention radar, illustrating the pandemic's unexpected consequence of connecting people who would never have met otherwise. Confinement leads to openness. A strange observation. 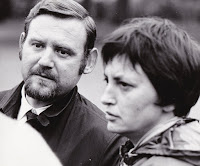 As mentioned in our "Virtual Gig" overview, clarinetist Ben Goldberg decided to take the opportunity to produce one solo piece per day, starting on March 19. So far, the album contains 63 pieces. The music ranges from exercises in style to real strong improvisations, with carefully arranged multilayered compositions for variety. In contrast to what you might expect, many of the tracks are joyful and light-hearted, as on April 3. You would expect that the confinement starts to weigh on the artist, resulting in more gloomy and depressed sounds by the end of May, but that is barely the case. Even May 20 still offers a carefully crafted optimistic composition, although I must say that the last days - so far - sound somewhat darker. 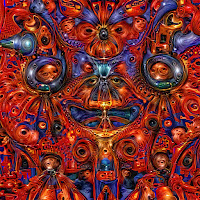 I am not sure whether Brandon Evans' The Grove is really a COVID-19 inspired album, but in terms of timing (May 11), in terms of concept (solo performance) and tone (not very upbeat), we could conclude that it fits in this series. Maybe one additional clue may be that his electronic alter ego, called Evil Robot Hustler also released an album called COVID-33 (picture on the right).

The saxophonist and sound artist is possibly best known from his collaborations with Anthony Braxton and Sonny Simmons.

His music is warm and delicate, with the occasional synth sound to give the solo sax some more context. 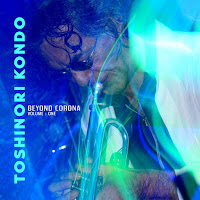 Japanese jazz luminary Toshinori Kondo adds his vision to things. For many years now he has altered his trumpet tone electronically, and things are not different on this album, with lots of reverb, phasers, phlangers, echo, chorus, and what have you. It is still technically a solo trumpet performance, even if it sounds at times like a full orchestra, including a rhythm section.

I am not a fan of this kind of music, so I won't judge it either. 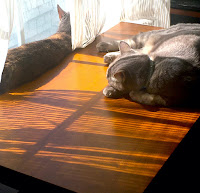 American oboist Kyle Bruckmann adds his own vision on the corona pandemic, with "Draußen Ist Feindlich" (it's dangerous outside), based on the lyrics by Einsturzende Neubauten:

Bruckmann insists on the liner notes that these are improvisations, un-overdubbed and unedited. But the tone of his oboe and English horn are duly altered electronically in real time. This results in suppressed sounds, sickening sounds, twirling sounds, reverberating, gliding, multiphonics, unpredictable, strange, eery, synthetic, unreal, quiet and loud, with lots of electronic bleeps and squeaks. The two most acoustic tracks (A3 and A5) get my preference, and I wish the whole album had been like that. But it's of course not the artist's objective to create something pleasant. So you endure the hostile  environment. I'm not certain that the cats on the album's cover slept so peacefully during the recording itself. 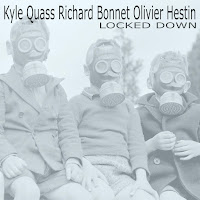 We get more "asynchronous free jazz" from France, with American Kyle Quass on trumpet, and French musicians Richard Bonnet on guitar & banjo, and Olivier Hestin on drums. The three musicians sent sound files to each other and improvised on each other's material. They call it "a shining light in a sea of darkness", the possibility to reach out to each other and to be creative. Even if the context determines the origin of their collaboration, it's hard to find any corona-related content in their music. Some pieces, such as "Wind Chimes" are even joyous and light-hearted. Some pieces are special, such as the unusual duet between banjo and trumpet on "Over Yonder". In short, its a good album, with good quality music and good interaction despite its "asynchonous" creation, but with little emotional reference to the pandemic.