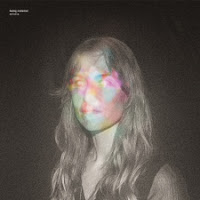 After six albums with her trio, Norwegian guitar hero Hedvig Mollestad Thomassen thought about a different kind of project that would push her boundaries as a composer and a bandleader and experiment with new, “dangerous” sonic territories. The prestigious Tinginsverket commission from the local VossaJazz festival came just at the right time and allowed her to present new work in the April 2019 edition of the festival. The festival performance was edited, sharpened, and recorded from scratch in the studio earlier this year.

Mollestad Thomassen had three initial thoughts about this new sextet project: she liked the sound of two Fender Rhodes electric pianos and other vintage, electric keyboards; no bass guitar; and one acoustic instrument “to maintain dynamics and avoid a six-member full blast unit”. She decided to call this project after the mighty and beautiful Greek goddess Ekhidna, a half-woman, half-snake creature, known as the mother of all monsters, and lover of the fearsome Typhoon. But Mollestad Thomassen insists that Ekhidna is not a concept album, but loosely tied themes about “human struggle and being a mother in times when our increasing inability to live in harmony with nature paints a bleak picture”.

The six musicians have never played together before but clearly clicked immediately into the Mollestad Thomassen universe. The two keyboards players are Marte Eberson, known from the art-rock band Highasakite, and Erlend Slettevoll (replacing Jon Balke who played in the live, festival version), known from the now-defunct band The Core, the Grand General group and his work with veteran drummer Espen Rud and more recently with sax player Jørgen Mathisen's Instant Light ‎(Mayhall's Object, Clean Feed, 2019). The main acoustic instrument is the trumpet, played by Portuguese Susana Santos Silva, who first collaborated with Mollestad Thomassen in Mats Gustafsson’s NU-Ensemble project Hidros 8 Heal! back in 2017. This sextet is rounded by two powerful drummers: Torstein Lofthus, known from the bands Elephant9 and Red Kite, and Ole Mofjell, known from the bands Emmeluth's Amoeba and The Big YES!.

Ekhidna is only forty minutes long but it offers rich, multifaceted, and distinct textures. In the brief, opening “No Friends But The Mountains” the subtle dialog of Mollestad Thomassen spacious guitar lines and Santos Silva lyrical trumpet charges this piece with a mysterious tension of an imaginary Nordic Western film. The following “A Stone’s Throw” is fueled by Mollestad Thomassen gifts as a superb riff meister, but she also knows how to expand beyond the heavy riffs and structure a complex piece that feels at home in prog-rock, fusion, and metal territories, but sounds fresh and totally her own. Mollestad Thomassen mathematical-like solos throughout “Antilone” embrace elements of King Crimson, Mahavishnu Orchestra, and Frank Zappa’s Mothers of Invention kicked into the 21st century. The gentle, melancholic, solo guitar ballad “Slightly Lighter” adopts open, atmospheric spaces that distill seminal influences of Bill Frisell work. On the title-piece, the whole sextet feeds the lost monster with patient tension, in a similar, improvised manner to the Hedvig Mollestad Trio, but the intense interplay of Mollestad Thomassen and the soaring trumpet of Santos Silva and the two drummers and keyboards players, injects broader palette of colors and percolating, irregular rhythmic dynamics missing from the Trio. The emotional “One Leaf Left” highlights, again, Mollestad Thomassen qualities as a clever riff meister, as this piece revolves around another intoxicating riff of hers, but enriched, deepened, and tamed by the emphatic and intelligent band, who takes the last ride with Greek goddess-monster.