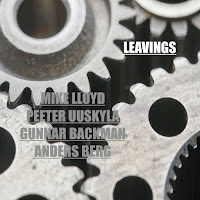 I have a soft spot for Peter Uuskyla and his loose, deceptively clumsy style of drumming. Here, he is accompanied by Mike Lloyd on trumpet, Gunnar Backman on fretted and fretless virtual guitar (possibly the storied Yggdrasil) and live loops, and his long-time companion-at-arms Anders Berg on bass.

I am familiar with some of Uuskyla and Berg’s previous work. I am less familiar, however, with Lloyd and Backman. Both have appeared on previous Simlas releases, sometimes together and sometimes, in the case of Backman, with other configurations of an apparently tight circle of musicians featured on Simlas (run by guitarist Tellef Øgrim and Berg) and Backman’s own label, Brakophonic Records.

In other words, most of these musicians seem to play together frequently. (Lloyd may be an outlier in that respect when it comes to Uuskyla, but the claim certainly applies to the rest of combinations.) Although the music itself can hardly be called “tight,” that familiarity shows in the Leavings. As the cover art shows, each musician can be thought of one within an interlocking system of gears. When one gears turns, the others must as well. If one were to stop abruptly, the others would have to follow suit. Were one to malfunction, the entire apparatus would be rendered kaput. I do not want to make too much of this image. Gears, of course, have no volition and no recourse outside of their track. When working properly, they do not take detours or try new things. The whole image, of course, is too mechanical to be perfect. But, as free music lovers would likely agree, the pursuit is not reproducibility or mere function, but an unexpectedly moving whole.

And that is what Leavings achieves. Uuskyla sweeps one direction with his blustery rolls. Berg lays an unsteady beat that collides with Uuskyla’s bass drum. Lloyd offers muffled fanfares and restrained runs that reference electric Miles, though it shies from the intensity and funk that Miles so perfectly harnessed. And Lloyd, alternates between disrupted radio-wave atmospherics, feedback-laden background fidgeting, and straight-up shredding. This sounds psychedelic without the polish and pop. It sounds like a less manic Acid Mother’s Temple, before their morning cup of coffee (or, maybe, in the laggard after-hours of the night), fumbling in search of some indeterminate magical combination of sound. It is fusion played by free jazz musicians. Or, free jazz played by prog rockers who found that too restrictive and jam bands too long-winded. Or, something of the sort. I am not sure which direction these sessions went in. I can say, however, that this album rocks, through and through. This may not be music that blows you away, but it is music that, if you heard it at a friend’s house (were that still a thing in these times), you would likely say, “Wild stuff. Who is that?”