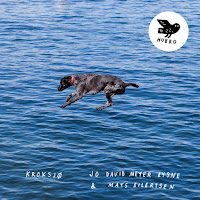 Jo David Meyer Lysne and Mats Eilertsen are two Norwegian musicians who have come together once more, on the Hubro music label (also originating from Norway). This encounter seems to place focus on the textural environment and less so on the improvisation techniques of Lysne (on acoustic guitar) and Eilertsen (on bass). The title Kroksjø is the Norwegian word for an oxbow lake, in which a "U" shaped lake is formed after being cut off from a river. Lysne has stated that these geological formations helped inspire this endeavor and that he views them as a symbol of the artistic effort, being impermanent and forever changing. Hypnotic motifs are lost and found on this record, and with the help of a turntable, the comfort of physical home audio is brought forward. Sounds from the natural world and folk musings seep through to the heart of this record, providing points of focus that solidify the artists' intentions. The first three tracks appear fragile, adding a glimpse of a wild landscape that is only truly masterfully harnessed by the artists later.

The icy strings are brought alive by the crackle of the turntable and droplets of water turn into wooden rhythms as if it is intended by nature's will. The sustained flourishes on the guitar are a welcome blaze of warmth on "Forve" and tease what instrumental themes are to come. The record takes a turn on the fourth track, "Byakjela" which begins with that signature sound of a record run-off, which has finished its side. This recurring blip plays into the acoustic guitar which enters shortly thereafter. This is followed by "Snoensøya" which serves as a fairly simple guitar interlude, leading up to the more impressive "Ålykkja". The synthesizers here seem to whirl around the listener in a very fluid fashion, with strings popping up to guarantee that the sounds don’t drown. The bleeps and bloops are reminiscent of Morton Subotnick’s work and serve to contrast with the bass playing that shakes beneath the surface, sending ripples in every direction. This is one of the more impressive tracks I've heard from these two artists thus far and demonstrates the heights they can reach through their meshing of instrumentation and feel for the environment they create.

The last two pieces help serve as a total bookend to this aural landscape, mostly through the utilization of the techniques used prior, but done in a more condensed and easily digestible fashion. On "Finna", the bass and guitar improvisations are played in such a cooperative and warm fashion that I wish there was more of this style throughout the album. The beginning vinyl crackle and repetition of the piano at the end satisfies the itch for some alluring, recently discovered atmosphere. The closing track "Furumokjela", sees the return of those liquid and wooden drops that render such a gratifying rhythm alongside the squeaking synths and melodic guitar plucking. These drops increase in pitch and frequency, contrasting with the sustained echo of the guitar, culminating in an ending which had me begging for more. This finale is somewhat short, and I wish more time was given to explore the soundscapes introduced throughout this album.

This is an album to get lost in, with a short enough length that allows more intense listening each time. The distinct focus on sound quality and textures supplies a sense of contentment that is very gratifying to the listener. Lysne and Eilertsen bring the sounds of an ever-changing world into our dwellings, with the use of crackling records and intimate instrumentation. In a very claustrophobic and nervous time, this album can serve as a momentary, fresh escape into the natural sounds of summer.