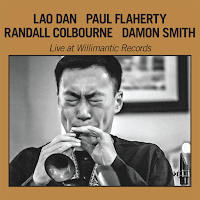 It was my recent introduction to Chinese reedist Lao Dan, featured on this recording, which made me realize I knew nothing of Chinese experimental music. The avant and creative music scene, it seems, is very much underground there. A precursory search of Chinese artists on the Free Jazz Collective reveals that little music is reaching international ears. Despite this, it seems unreasonable to suspect that the most populous nation isn’t host to a burgeoning scene of creative artists. If so, then where are they?

Music and arts in China, as it turns out, has quite the convoluted history due to state censorship programs. American jazz and Shidaiqu - a Shanghainese hybrid of jazz and Chinese folk music - were popular forms during the first half of the 20th century. Cultural reform from the Communist revolution in 1949 effectively put an end to jazz and Shidaiqu. The state denounced it as “yellow music,” the aural equivalent to pornography. It wouldn’t be until the 1980s that jazz, among rock and pop, would surface again in China as restrictions on Western musical styles loosened. In the internet age, fans and artists are finding ways to subvert the state’s cultural and informational blockade and are gaining exposure to new forms of music.

Experimental music, already on the fringe even in the best of cultural conditions, struggles under the added weight of Chinese censorship. Venues and opportunities to perform or record are few and far between, and, according to improviser and The Wire contributor Noel Meek , some artists deal with harassment from the government. The effect on artistic opportunities? Lao Dan, in the liner notes, sums it up: “Basically it’s still an isolated life.”

Dan might represent one of the few Chinese creative artists fortunate enough to gain some exposure on the international scale, albeit only very recently. Dan grew up in Northeastern China, just across the Yalu River from North Korea. His prodigious talent on the saxophone and, later, bamboo flute landed him the flutist chair in the Shenyang Conservatory of Music’s Youth Chinese Orchestra. Rather than pursue this career as a conservatory musician, Dan ventured on his own as an independent artist and fell in with a small cohort of like-minded musicians. His notable projects include the Beijing-based avant-rock group Red Scarf, and Benbo’erba & Babo’erben - a quirky duo project with multi-instrumentalist Li Daiguo that reinterprets traditional Chinese folk music through an improvisational lens. When a Red Scarf tour in the United States fell through during the spring of 2018 (Dan was the only member who could secure a visa), Dan found himself teaming up with local musicians across four U.S. cities. On one Sunday evening at Willimantic Records in Connecticut, Dan was joined onstage by free-jazz stalwarts Paul Flaherty (saxophones), Damon Smith (bass), and Randall Colbourne (drums).

What we have from that meeting is this recording - nearly 80-minutes of raw free jazz. If this occasion were just between Flaherty, Smith, and Colbourne, I would expect no less. As I don headphones for my first listen of Live at Willimantic Records, I wonder, how will Dan fit into this equation? Will I hear the folk melodies that pervade his work with Benbo’erba & Babo’erben? How will the feathery tones of his bamboo flute, or the piping chatter of his suona fare amidst the muscle of these free jazz titans? The opening minutes of the first track, “Noise & Light,” dispel any notion that Dan is an outsider in this session. His approach on alto saxophone, which remains his primary ax throughout the record, is cut from the cloth of the free jazz tradition; this may be in part due to his childhood exposure to American jazz records. He and Flaherty make up a formidable frontline. They explore all the vagaries of tone and texture; Flaherty carves amorphic figures with his sandpaper tone while Dan peels paint from the walls with his altissimo screams. Colbourne and Smith co-captain rhythmic duties that fluctuate opportunistically - everything from an off-kilter swing, to emptying-out-the-kitchen-drawer kind of clatter. It’s a rowdy event, and you know they’re all having a helluva good time.

The riotous display on “Noise & Light” mostly sums up what to expect on the rest of this record. Dan adapts the suona, a small traditional Chinese reed instrument, to this non-traditional setting on “Winter Dawn.” Even with its limited tonal range, the high-pitched nasally voice of Dan’s suona meshes surprisingly well with the group. The shrill intensity pitted against Flaherty’s alto, Smith’s arco and Colbourne’s clatter can be unnerving - but then again, isn’t that the best part of free music? Free jazz fans and artists alike are a branch of peculiar folk that finds comfort in the uncomfortable, but I digress… “Long Shadows” is the album’s highlight in my opinion. Dan plays the bamboo flute here, and his mastery of the instrument is apparent. The piece evolves slowly around abstract textures and shadowy ideas before gaining momentum and ferocity. The gnarl of the group would seem to foil Dan’s folk-lyricism and fanciful flights, but they all jive in a most absorbing and interesting performance. The title of the last track, “Relentless Still,” best describes the group’s stamina even after the preceding hour-long campaign. They give it everything they got in a final display of reckless bravado. It’s a thrilling conclusion that should more than satiate one’s appetite for passionate sonic destruction.

Live at Willimantic Records is a very engaging album for those who have the fortitude and enjoy this brand of high-octane free jazz. The music, enjoyable as it is, walks on trodden ground and doesn’t necessarily offer us anything new. However, I think the most valuable contributions here are the new relationships forged. I am always amazed by the cross-cultural pollinations going on within this large and diverse musical community - where it’s not uncommon to have artists from three or more continents performing together on the same stage. Maybe we haven’t heard much from the interstices of Chinese improvised and creative music. Most of us certainly haven’t heard of Lao Dan before this recording. But I’ll venture to say that is going to change. Voices are emerging from China, and despite the years of artistic suppression, there’s a lot they have to say. I’ll provide a quote on the subject from Elliot Sharp in an article in the New York Times:

“The feeling of the scene in Beijing is exciting and reminds me of New York in 1979. There’s a tangible sense of discovery and transgression.”