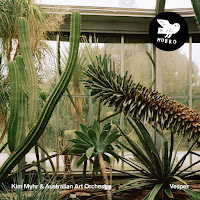 The sonic universe of Norwegian composer-guitarist Kim Myhr finds its inspiration in many sources. His new epic work Vesper (evening in classical Latin) references Bob Dylan’s classic album Oh Mercy (Columbia, 1989) and book Chronicles, Volume 1 (Simon & Schuster, 2004), the writings of French spiritual para-surrealist writer, critic, and poet René Daumal (1908-1944), an associate of G.I. Gurdjieff with an interest in Eastern Philosophy, and the balmy warm nights of Australia where Myhr lived more than a decade ago, Myhr chose to record Vesper live at the Melbourne International Jazz Festival in June 2018 with the world-renowned Australian Art Orchestra.

The nocturnal Vesper consists of three movements that demonstrate Myer’s command of complex musical resources and interest in form. “The music I’ve listened to the most, and which is perhaps the closest to me, is the music that I listen to in the hour before going to bed when the tempo is a bit slower, and the expectations of the day are fading”, says Myer. “Daniel Lanois talked about how they recorded Bob Dylan’s Oh Mercy only in the night-time because musicians tend to be more patient and relaxed then, and even play a few bpm slower”. Myhr wanted Vesper to reflect the times of the day “where we can be at our most private and intimate”.

The music of Vesper has a free-associative, dream-like quality. You may feel washed by orchestral and surprisingly subtle harmonious ripples of music that gently embrace you and adapt you to its hypnotic rhythmic cycles and leisured development, always fascinating with its rich spectrum of sounds. Myhr’s own electric 12-string guitar with its special tunings leads the Australian Art Orchestra, a septet featuring leader Peter Knight covering electronics and hammered dulcimer as well as trumpet, Joe Talia on Revox tape deck and electronic and The Necks’ Tony Buck’s maelstrom of percussion (he has played also on Myhr’s You | Me, Hubro Music, 2017). The septet also features reeds player Aviva Endean, violist Erkki Veltheim, violinist Lizzy Walsh and double bass and autoharp player Jacques Emery.

Each of Vesper’s three parts has its poetic title, its own narrative, and mood, focusing on an imaginary time with no daylight and leaving enough space for improvisation and personal interpretation. The “Part One: I caught a glimpse of the sea through the leafy boughs of the pines” is a quote from Dylan’s Chronicles, Volume 1 describing the experience of the Oh Mercy recording sessions in New Orleans. This is the most meditative piece here, slowly structuring the acoustic and electronic orchestral palette of sounds of Myhr plus the septet, revolving around the deeply resonating, skeletal-atmospheric guitar lines of Myhr.

The title of “Part Two: We seemed to grow more and more pensive, but in fact, we were less and less” is taken from Daumal’s magical book Mount Analogue, the highest mountain in the world, focusing on the section where the mountaineers overlook the wet meadows of Mount Analogue in the evening light. This section inspired also inspired Italian avant-garde composer Francesco Messina to write his own composition Vesper. This piece suggests a mysterious, cinematic narrative, patiently building a disquieting and chaotic tension, highlighted by the work of Thalia and Buck, but as it teaches an almost sensory overload it settles on the exotic, ripple-like movement of the first piece. The “Part Three: no walls, no ceiling, no windows” is taken from another Daumal’s book, A night of serious drinking. The repetitive strumming of Myhr’s guitar dictates its first, stormy-intoxicating part but slowly this piece opens for more evocative, quiet dream-like undercurrents and creates some of the most intimate and moving moments of Vesper.