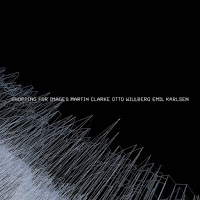 By Fotis Nikolakopoulos
For the past at least four to five years there’s a strong current of younger generation British improvisers working and producing wonderful results throughout all fields of improvisational musics. Smaller off the radar labels (like Luminous, Raw Tonk, Heave Petting and Tombed Visions to name a few) are hubs of exciting sounds that remind the listener the urgency that the recordings of the first generation of European improvisers had. Those guys –men but many women as well- bring a breath of fresh air in the sometimes stale waters of mannerism careering can bring.
This trio of Clarke on alto saxophone, Wilberg on double bass and Karlsen on drums is my first listening from one of those labels, Open Ear Music. Although in theory this could be a classic sax-bass-drums formation, Shopping For Images goes all the way far from it. Thankfully. Even though the trio stays on the verge of free jazz and improvisation, they try to incorporate melody – or at least melodic lines coming out from the sax- in a way that I sensed a battle. A battle between the tremendous work of the bass (another excellent recording for Otto Willberg of which I’m a big fan by now) and the drums on one side and the sax on the other. The, so called for this cd, rhythm section manages to play in unison and present a body of polyrhythmic disturbances so soothing for our, in need of sonic surprises, ears. The sax of Clarke (you can listen on his different sides from his solo recordings on the same label) makes his own voice quite articulate: he either follows back the other two, leads or makes room from them. His phrases seem distant but at the same time quite spacious for Willberg and Karlsen to present their ideas and responses.
The three tracks off of Shopping For Images could form one longer one. Their titles present, at least in the form of suggestions, their ideas and thoughts on how to make new music up to a certain point. I hate generalizations but, yes, they seem to be a vibrant part of many voices coming from the British Islands right now. Let’s hope that this dystopia will not silence their artistic voices. So, let’s be on the lookout for some support.