“ A man can be himself only so long as he is alone; and if he does not love solitude, he will not love freedom; for it is only when he is alone that he is really free. ” – Arthur Schopenhauer 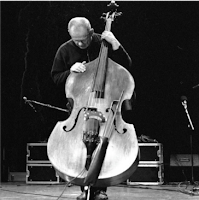 Opinions sometimes differ as far as double bassist and tuba player Peter Kowald, who died far too early in 2002, is concerned. For my friend Jochen Behring, who is an outstanding free-jazz connoisseur and who occasionally co-organizes concerts at the Exploratorium in Berlin, his death has been one of the biggest losses for free jazz in general, because he “was able to lift a mediocre concert to a higher musical level by his extraordinary presence, which was immediately transferred to his bass from the first note at a concert.“ Alexander von Schlippenbach, on the other hand, seemed to turn up his nose at a conversation after a show of the Globe Unity Orchestra when I claimed that Kowald was an outstanding musician. But even Kowald’s former comrade-in-arms, Peter Brötzmann, emphasized how much he missed him, if only to argue with him.
Kowald himself, born in 1944, was undoubtedly a veteran of the European free jazz scene, he had been active in Wuppertal together with his friend Brötzmann since the early 1960s. He was a co-founder of Free Music Production (FMP) and certainly one of the most daring and uncompromising musicians of his generation. Crucial to his musical philosophy was that he avoided to play the bass in a conventional way by preferring to work with the bow, because the break with traditional jazz forms could be accomplished more openly con arco than in pizzicato. Kowald mostly avoided linear structures, he often played in a polyphonic way and used tremolos, thereby achieving aperiodic, rhythmically moving sound surfaces. Hardly ever was there a fundamental rhythm in his work - especially not in the solo recordings - instead he tended towards a kind of rubato of the short range (as Ekkehard Jost called it). The plucked parts were often enriched by vehemently hitting the bridge as a means to alienate sounds as well as for the purpose of enhancing expression. “I want to play simple and complex at the same time. This is one of those contradictions that may never resolve, but it remains a good ideal,” Kowald once told Michael Heffley. Perhaps the closest Kowald got to a resolution was in solo performance, in which he always follows a narrative, even if it’s full of deviations, breaks and surprising little details.
Total Music Meeting 1997 (Solo Bass) is a prime example of his notion of improvisation. The album presents two live sets - 105 minutes altogether - recorded on two different days in November 1997. As was typical with Kowald, complexity abounds: From the very first note he carries you away with wild arco passages, he scratches, strokes and tears at the strings, musician and instrument form a perfect symbiosis. Both sets display a variety of ideas, the individual passages are mostly characterized by resonant arcos and reverberant pizzicato variations. Kowald is equally at ease with both types of playing, often juxtaposing diverse simultaneous sounds, overlapping layers of notes and harmonics. His improvisations zoom in and out adjusting the focus on some sublime detail, just to spin the dial back to bring the larger perspective into view, e.g. in the second version around the 21-minute mark. Doing this he passes through all possible emotional stages, the instrument sounds as if it’s stretched and compressed. Then again, medieval tunes are introduced (reminiscent of the score to Werner Herzog’s “Woyzeck“ film), but from which one is abruptly torn out. In the pizzicato parts, Kowald sometimes de-tunes the bass, taps on the strings and creates some bizarre alien sounds, which has the effect of listening to a heavily deconstructed blues tune. He also uses glissandi and lets his bow dance on the strings, the way Barry Guy does it. Even if he can’t compare with the great British bassist’s elegance, Kowald’s tone goes right through your marrow and bone, since his bowing gives his bass a voice-like intonation. Often it seems as if there were two basses at work, especially when he wallows in overtones, one of his characteristic musical means. In the process of improvising the instrument is literally brought to life, e.g. at the beginning and end of the pieces, when the music jubilates, exhales exhaustedly, grumbles, sings, sighs or sounds as if it’s speaking to itself in a disguised voice. Kowald also sings at the very end, reminiscent of didgeridoo melodies hovering in the air. Doing this he “is no longer the subject in front of the reality of the bass, but he uses it to project playing possibilities onto this world, which sound like dreams acted out“, as Markus Müller puts it in the liner notes to Was da ist (FMP), another highly recommendable Kowald solo album.
Total Music Meeting 1997 (Solo Bass) is classic, almost typical improvisational music. Hard, honest work, but Kowald's magic, his archaic melodies, his peculiar flow, his big noise waves, the mixture of the everyday and the non-banal are also shown here, indeed they are wonderfully mature. Nearly two hours of bass solo may seem monotonous, but in this case they are extremely varied. It's like a great summary of his music.
Appendix:
Kudos goes to Olaf Rupp for the mastering of the original tapes. He subtly changed the ambient sound of the original recording. Peter Kowald often mounted a Neumann microphone with foam padding in his bass bridge, very raw and mono sounding, very dry and hard. The mastered result is very immediate, full and somewhat softer, which is ideal for the listening experience.
Total Music Meeting 1997 (Solo Bass) is available as a digital download only. You can buy it here.
You can listen to “Die vergessene Stadt (first version)“ here: