“Solitude is the profoundest fact of the human condition” (Octavio Paz)

Today, a round-up of four recent solo double bass albums followed tomorrow by Martin Schray’s thoughts on two performances by one of the format’s pioneers. There are many features which set such recordings apart, possibly the most important of which is how to sustain long-term invention and suitable contrasts on an instrument that still tends to be regarded primarily as having an ensemble role, one of a supporting cast. Ever since Barre Phillips’ Journal Violine (Opus One, 1969), generally considered the first solo bass album, distinguished musicians like Barry Guy, Peter Kowald, William Parker, Ingebrigt Håker-Flaten, Pascal Niggenkemper, Motoharu Yoshizawa and Joëlle Léandre, to name a few, have grappled – quite literally – with these issues. The present releases offer their own, very individual solutions.

What solo performances share, though not exclusively so, is the notion of the instrument as something that both condenses and projects, a receptacle for and reflector of temperaments in a feedback loop where the relationship between player and what is played is at its most acute and revealing. Finding a sympathetic musical locus for this forms part of the improvising process. 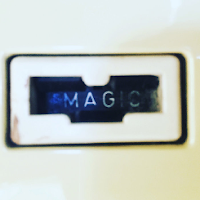 Magic Timing was recorded by Jason Roebke at Kingsize Sound Labs, Chicago in January 2019 and is concerned not only with the rich textural resources available but by the double bass as an instrument that can sing. Two tracks deal with temporal perception using long pauses that seem to function in different ways. During ‘Timing (Cracks)’ the silences interrupt, sometimes as an abrupt halt, with Roebke resuming after the rupture in a new direction. With ‘Timing (Bursts)’ they are like pauses for breath within an energetic narrative. On both the bass is brought to bustling life using light touches, rubbing and more aggressive striations as the bow, in rapid motion, glances, bounces, skitters and bites into the strings.

The experiments in timing alternate with a pair of variations on tunes from the American songbook: ‘Van Heusen Variations’, based on Jimmy van Heusen’s ‘It Could happen to You’, and ‘Robison Variations’ that uses ‘Old Folks’ by Willard Robison. My recognition of standards without the lyrics is fair to middling – I can recall a melody but frequently not put a name to it, or more usually the wrong one – and in this case I had to get confirmation from Roebke. Even then it was not straightforward. These are not variations in the usual sense: a theme stated then subjected to distinct transformations. Instead he gives the impression of starting at a point in media res with elements of the tune in a skeletal state, a distant recollection drifting in and out of focus, some parts highlighted others merely hinted at. Executed in shifting tempos the melody never seems to fully appear but doesn’t entirely disappear either as it wanders within an intermediate zone, like shuffled words in a sentence that don’t quite join up. Once expectations are adjusted there’s an elusive beauty to Roebke’s treatment, as if furnished with past memories and future possibilities: hesitant, confident then unsure; episodes punctuated by brief interjections, odd repeating figures and rhythmic taps; scattered harmonics and phrases rendered with fulsome, big-toned plucking.

Given the heavily physical aspect of sound production involved these are the kind of improvisations that would benefit from a visual dimension. Witnessing movement, gesture and the muscular effort involved can add extra weight to both the medium as an experienced event and understanding the bond between musician and instrument. Strangely, here the sense of Roebke playing alone is enhanced by his breathing and the occasional leakage of sounds from outside, including the distant wail of the emergency services. 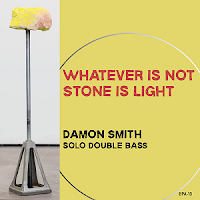 Damon Smith’s first solo album, Winter Solos for Robert Ryman (Balance Point Acoustics, 2019) was recorded live in February 2019 at Cafe Fixe, a place where “cafe sounds are as much a part of improvised music as pure silence.” It’s just the latter we have on this studio session made on April 30, 2020 at Bird Cloud Recording in Edwardsville, Illinois at a time when public gatherings had been suspended under the lockdown. The album consists of 23 tracks over 56 minutes, many lasting less than 2 minutes, with evocative titles taken from Lysander Kemp’s translations of poems by the Mexican poet, Octavio Paz, a line from whose poem Piedra Nativa (Native Stone) lends the album its title.

Music and poetry abound in oblique allusions, often just at the edge of things – the penumbra of experience – so that their tendency to suggest rather than state can make for a comfortable fit. Paz’s poems embrace sensual images, ambiguities and surreal conjunctions which glow with a nuanced intensity, to which Smith’s aphoristic studies might be thought distant musical relations. They can also trace their ancestry to the Études of Chopin, Debussy, Ligeti and others as a compendium of short exercises where each piece focuses on a particular articulation, sonority or playing technique in order to explore discrete musical ideas. In other words, during the lockdown Smith chose a freedom to express within self-imposed limitations. Interpret that as you will.

To take some examples, during ‘Limitless Autumn’ the bow is threaded through the strings producing a rattling accompaniment; ‘Noon Nests In Your Inner Ear’ is dominated by multiple glissandi; ‘Broken Mirrors Where he World Sees Itself Shattered’ is a made up of glittering harmonics produced pizzicato and by strikes of the bow; arco harmonics and overtones play a similar role on ‘Night of Wheat’. ‘Conduits of Bone’ is a slow percussive crescendo using the back of the bow, col legno, followed by ‘Erasing Landscape’, a perpetuum mobile employing squeaky sol ponticello bowing, on the bridge; ‘Uncertain Foliage’ appears to be a double pizzicato with both hands throughout. There are varying timbres and moods: ‘The Eye Retreats’ uses dense chords moving across the spectrum of the bass ending as a reverberant growl in the lowest registers. ‘Heat Rested’ is song-like with a poignant vibrato, and ‘From Green to Yellow’ accelerates and slows but never stabilises at a fixed speed.

Some of the longer deliberations probe the expressive potential of more diffuse textures. In ‘Flayed Sun’ a complex thicket is followed by the bow being drawn so slowly that it generates pulsating oscillations and the piece ends by laying down thick coatings of sound. ‘From Dream to Watching’ features hard, scratchy bowing relieved by more lyrical passages, and there’s something of everything during ‘Kneading Trough’, a virtuosic display of what the bass can do.

Notwithstanding their relative brevity, as a collection these pieces go beyond mere academic investigations of playing methods and elevate the minutiae of how a performer can engage with the double bass, an instrument of genuine diversity. And like the course of our everyday lives they range from the eloquent to the jumbled, the transitory or provisional to things more deeply rooted.

Whatever is not Stone is Light is available on CD and as a download . 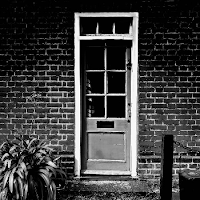 Musically, John Edwards is rarely alone being the double bassist of choice for so many British and visiting musicians as well as across mainland Europe. In the past there have even been sightings of him between gigs racing up Kingsland High Street that connects Cafe OTO and the Vortex with his bass strapped to his back. This album was “Recorded at home. Self-isolating”, however and can only be had as a download . It would perhaps be unwise to speculate too much on the extent to which self-isolation effected these performances or whether Edwards shared either of the sentiments quoted at the head of the page – as so many now know, there’s a world of difference between choosing to be solitary and having it forced upon you.

In contrast to Damon Smith’s concise studies the album consists of two long improvisations, disquisitions that are plotless, intricate, and abstract, though like Smith equally concerned with exploring the full scope of what’s at hand. Solo work spotlights the specific, the sheer immediacy of sounds and their reflections, and it is from these that Edwards’s playing springs, propelled by a fertile and seemingly insatiable dynamic drive. There may be no narrative but there’s a clear dramatic contour as he progresses fluidly from one area to the next. Passages of bravura fingerwork are followed by stark, crankshaft rhythms and brittle snaps; filigree micro-activity is set against shivering blocks of sound; bowing is glassy then reverberant, at times as if trying to excite a welter of resonant frequencies within the bass. Both improvisations explore roughly similar terrain but ‘Jadah #2’ contains some deft counterpoint and concludes with glutinous chords mutating into a gentle repeated melody and a descent to the subterranean regions that fades to silence, a dissolution of substance into absence which might be taken as emblematic. 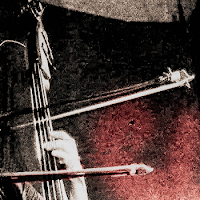 Finally, a reminder of how things were and how they will eventually be again, at least for some. This is a performance by Edwards at Kafé Hærverk, Oslo during the Blow Out Festival in October 2019. As he observed in an interview several years ago, “We thrive in groups and nothing can recreate live gigs where we are all in the same room shuffling, farting, coughing and all of it. Certainly, in our culture, the thing of some people being on stage playing and some listening is all part of the event.” As is apparent to anyone who has seen him play Edwards has an intense corporeal rapport with the instrument, alert to its mass and the tremulous sensitivity of vibrating strings. His bass can function rhythmically, percussively, melodically, vocally, or in fluctuating combinations giving it an independent, kinetic life. “I simply love the effect an instrument has on people,” he said. “It is what you can do with it – the sounds created. It is a physical thing.” Before an audience, a musician knows when they’re hitting a nerve.

The performance, aptly named ‘Guts’, lasts half-an-hour and covers a compelling montage. The listener is drawn even further into the panoply of Edwards’ sound-world by the use of two microphones, directed at the bottom and top of the double bass, which produce an unusual stereo spread and the effect that his right hand appears in the left channel and his left in the right, sometimes disclosing their differing actions. Periodically he also uses two bows as at the opening to create a flicker effect, then digging into the bass in meaty, overlapping layers. Other times one of the bows is threaded through the strings higher up the fingerboard so that it partially retunes and sets off complimentary frictions.

Such is the responsiveness of Edwards’ thinking that there are periods when matters seem in a state of almost constant transfiguration – notes turn into rhythmic buzzes and dull picks below the bridge; tiny incidents pop up, jostle, entangle then wither away; pitch and texture merge using detuning and woozy slides; resonances rebound with harsh scrapings and great sawing arpeggios that fill the air. The performance ends with grainy and sustained double bowing which resembles the hypnotic, throbbing tones of a didgeridoo, alongside the sensation that time has passed in a unique way. Outstanding.