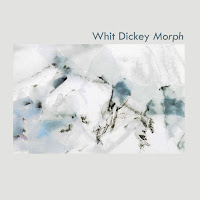 Masterful free-drummer Whit Dickey appears to in the middle of a purple patch.

It’s not like he’s been short of work over the last few years (check out his tenure with Ivo Perelman, alone, for visceral evidence of that) but since 2016’s tremendous Vessel In Orbit project it appears a switch has been thrown.

His trio with Rob Brown and Brandon Lopez (on Dickey’s new label Tao Forms) dropped just weeks ago and this release on ESP-Disk’ – released with minimal fanfare – is the second double album within a year.

Working here, first in duo then trio, we have the opportunity to really hear the distillation of an evolving art form reaching a heightened level of self-awareness. There have been rumours of repeated returns to the studio to achieve this, but it is clear that this was in no way due to lackluster performance or lack of focus – but in hearing a deeply personal, spiritual inner-sound and attaining its manifestation to be captured on record.

Dickey and Matt Shipp have a near 30 year history between them, going right back to the David S. Ware Quartet and to my knowledge this is the first time we get to hear them at length, on record as a duo. There is a formal perfection here. Before one even presses play, we know the level of experience brought to this stripped-back project. What I hadn’t anticipated was the depth of subtlety and vast openness created here. From elliptical semi-song form to free abstractions that sound as though they are painted in mist, this is an album that requires meditative listening to be really heard.

Dice which carries the same name as a Right Hemisphere tune – and may in fact be a distant cousin – has Shipp playing high-end spider steps on the keys, as Dickey rolls an oblique swing.

Thick is the first disc’s heaviest piece, with Shipp appearing to lead the charge of huge weighty chords, really drawing out the intensity of this concentrated set up. At one point we even get to hear piano and drums hit in time, actually hammering together on the beat.

The heart of the album goes to Helix, the longest piece. Opening into a melody of mournful simplicity, Whit shuffles and props amongst the plaintive piano before subtly shifting the underlying mosaic – the tonal placement and intermeshing here is extraordinary. Even at its most stripped back and concise, this masterly duo demonstrates how this music permeates and fills every part – in every direction – of one’s consciousness and intellect, simultaneously. Not out of synch, but out of time: where is that time-space? Because it is a place – that we are transported to. This is Freemusic at its most subtle and refined.

The wonderfully titled Steps winds up with a piano bass-line of a kind. A collection of ascending notes build and subside, differing in form and intensity before revealing a deserted beach of stacked-stone towers.

On the second disk the duo becomes trio as they are augmented by Pacific Northwest-born trumpeter Nate Wooley, which utterly changes the dynamic. Morph’s second chapter is capped by a connected suite: Noir (1-4). Alternately tempestuous, turbulent, sparsely atmospheric, urban and yes, noirish.

Wooley has an impressive array of extended technique: spitting split tones, vocalisations, scratched alien noises and drone that colour and shade every piece here in unexpected directions; Take The Wild Train is particularly nodal and expressive. At other moments the trio shift into more narrative led sounds and things grow hugely filmic in their evocation of space and event (To Planet Earth).

For me the key piece here is Space Trance. Extremes of light/dark, peace and intensity, all conducted – stoked and tempered – from the drums, providing the perfect example of Whit Dickey’s art, circa 2020.

Morph is a significant statement, with two albums worth of diverse material to delve into, ranging from diaphanous detailed sound spaces to darkly epic monuments, providing hours of listening. Intrigued to know where he’ll explore next.