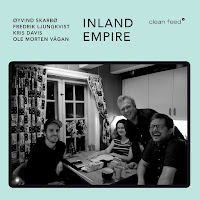 Inland Empire finds a top group of Scandinavian players in collaboration with Canadian pianist Kris Davis, a staple of the New York jazz scene. Bassist Ole Morten Vågan may be familiar to listeners as the leader of Motif; an acoustic fusion outfit devoted to Vågan’s own songbook. Fellow Norwegian Øyvind Skarbø is the force behind the clamorously eclectic Skarbø Skulekorps, in which he both drums and sings. Finally, Swedish reedist Fredrik Ljungkvist has been one of the most confident voices in European jazz for decades; closely associated with the supergroup Atomic since 1999.

Strikingly then, Inland Empire gathers four accomplished bandleaders in a flexible collective. This common calibre accounts for the consistent texture of this recording, to which each player contributes original music. This spirit of equality is formalized in the presentation, as these pieces appear melded in sequence; a continuous suite of multiple sources. Solos and duos function intelligently as bridges throughout, formalizing the ethos of collective improvisation at the level of the setlist.

Only the title track is credited to the entire group; an opening invocation that develops in free time with little trepidation. As the performance swells, Ljungkvist splits off from the group with a repetitive, ascending figure; colliding Vågan’s tune, ‘Truffle Pigs and Katmandu Stray Dogs.’ Somewhere between the mutant blues of Monk, thickened by dissonance, and the Scandinavian legacy of Coleman’s harmolodics, the undulating head is gratifyingly familiar in its strangeness. Davis’ staccato chords make a plane in the center of the group’s stuttering interplay, which parts before a patter of notes in the bass clef. Vågan’s transitional solo is woody and cantankerous, ascending the neck only to plummet in percussive punctuation.

‘Jag Vet Inte,’ composed by Ljungkvist, approaches the cerebral airiness and instrumental palette of Jimmy Giuffre’s iconic second trio; not least for its feature of the clarinet, and the initial absence of the rhythm section. After two minutes of rapid conversation between Davis and Ljungkvist, the duo settle onto a simple unison theme; a melody of wide intervals, stated in single notes on the piano. Nearly three and a half minutes into the recording, the rhythm section arrives—a patter of brushes beneath a heavy walking bassline, and the piece concludes with a gorgeously restrained drum solo by Skarbø, in which one hears virtual cicadas.

‘Surf Curl,’ Davis’ composition, begins in hesitancy, as a scattering of short notes. Davis hammers single keys with two hands, as though handling mallets, while Skarbø bustles ahead. At the apex, Ljungkvist unleashes a barrage of rapidly tongued single notes above Davis’ heavy-handed octaves, which continue through a terminal diminuendo. Skarbø’s ‘Hindsight Bias’ is the ballad, if that honour may be assigned to one track on an album of contrasts; though its melancholy theme mounts to an agitated breakaway by Ljungkvist, whose piece, ‘Fighter,’ closes the album on a declarative note.

As a demonstration of dynamic range and group identity, Inland Empire is a wholly foreseeable success; far more unified and tonally consistent than most groups with four distinct composers. One can only hope that they convene again, and soon.