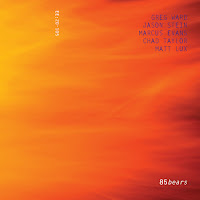 A number of relatedly unrelated things come to mind each time that I listen to 85bears. First there is  how the winding lines of the windy instruments in the foreground bop and weave around each other with melodically free abandon, kind of like the early recordings of Ornette Coleman. Then of course, Chicago. Allusions to the Chicago Bears football team lineup from 1985 are scattered throughout the work, from the name of the group, to the titles of the songs, and Chicago is where saxophonist Greg Ward, bass clarinetist Jason Stein, bassist Matthew Lux, and dummer Marcus Evans are based (the only odd-man-out here is Philadelphia based drummer Chad Taylor, who adds overdubbing on three tracks). The final thing is the theme from BoJack Horseman, the acerbic cartoon series from Netflix.

The BoJack reference is the weakest one, but it comes to mind every time that I listen to the opening tracks of the album. 'Lament for Sweetness' begins with a gloopy electronics introduction with an improvised sax line that seems to recall 'Chattanooga Choo-choo'. This (imagined) one minute long mash-up grabs me each time. The following track 'Samurai Singletary', which is double the time at the opener, eschews the electronics for a slippery backbeat (so slippery it's sometimes in front), and a sympathetic rivalry between the two woodwinds.

About those horns: Stein and Ward have both, over the course the past decade or so, released a bunch of progressively free as well as carefully composed recordings. Stein's Hearts and Minds and Locksmith Isodore groups are consistently engaging and enjoyable. Heart's and Minds debut (Astral Spirits, 2016) recalled Sun-Ra, while Electroradiance (Astral Spirits, 2018) took the listener down an early fusion path. Ward's Touch My Beloved's Thought (Greenleaf Music, 2016) was an ambitious and successful large-scale work based on Charles Mingus' music. The two have also worked together in other combinations, such as 2019's evocative Nature Work (Sunnyside Records), which all simply means this is music supported by deep mutual understanding.

Back to the album at hand. The following track, clocking in at 7-minutes, is 'Willie', which showcases each player in some manner. The opening takes a moment to pick up as Stein offers from breathy tones, and Ward shadows him. Evans and Lux provide some textural fills and support as the two woodwinds seem to be gently prodding each other. About two and half minutes in, Lux and Evan seem to agree on a reserved groove, and Stein and Ward begin layering on individual, complimentary ideas. 'Gault', which features Taylor's additional drumming, represents the more aggressive side of the group, at least rhythmically. While most of the songs are built on unusual grooves, or elements thereof, this track thrives on a solid pulse, but ends too soon. On the other side, 'The Butler' may be the free-est track, deeply exploratory with only a gentle cohesive development, but which leaves a lingering desire for more.
This tape/digital release is available through Bandcamp, which means there isn't much standing between you and your Paypal account to stop you from enjoying this excellent album.
Paul on Sunday, July 26, 2020
Share

A good review which nicely makes clear how the music sounds in a way that not all reviews do! I also found it helpful that you ran through briefly the previous records by these artists, allowing the reader to follow the thread deeper into the labyrinth.