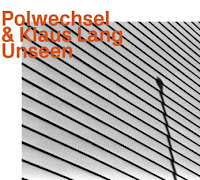 The current incarnation of the experimental Austrian-German quartet Polwechsel featuring founders cellist Michael Moser and double bass player Werner Dafeldecker, and the two percussionists who joined the quartet later on, Burkhard Beins and Martin Brandlmayr. The group teams up with Austrian contemporary music composer, concert organist, and improviser Klaus Lang (who recorded before with Dafeldecker, Lichtgeschwindigkeit, GROB, 2003) for Unseen, recorded at the Grosskirche of St. Lambrecht’s Abbey, Austria, in November 2018.

Unseen plays with the old - the acoustic, resonant space of the centuries-old church with its built-in organ and its vast range of both frequency and tonal colors and the vintage, analog synthesizer sounds, played by Lang, together with the so-called classical instruments, and the new - sonic ambiguity, strange hybrids, illusory associations, and instruments that are rendered unfamiliar by the smoke and mirrors of ‘acoustic’ mixing, masking, and reverberation. Unseen is tuned into the boundless power of the acousmatic, the idea that when we can’t see the source of what we hear, the listening individual - or the musician - is given an opportunity, freedom even, to interpret that sound in any manner that they can possibly imagine. Polwechsel and Lang irreverent approach to genres, sounds, silence, and extended techniques, all blur the distinction between composition and real-time improvising, and realizing of the score and between free-improv and contemporary music.

The first composition, Lang’s “Easter Wings”, makes full use of the acoustic space qualities in order to create an elusive, illusory conception and to suggest an atmosphere of abrupt noises, sonic clusters, and natural harmonics. The church organ of Lang fills the resonating space and affects the instruments of Polwechsel, modifying their acoustic sounds to the point of being unrecognizable. All sounds seem to be lost in the resonating, low tones mechanical forest that the organ, or shaped by its low register, including the fascinating rustle of the metallic cymbals. But out of this ethereal, reductionist forest of sounds surfaces a delicate and enigmatic melodic vein then the bowed cello and the double bass and the percussion instruments sound more clearly.

Moser’s “No sai cora-m fui endormitz” (“I don’t know when I’m asleep” from a poem by the troubadour Guilhem de Poiteu) puts again the church organ and the acoustic space in the position of conspiring with the other instruments to produce a sound that is more than the sum of its parts. This kind of hybrid instrumentation plays in highly disciplined, rhythmic unison that slowly mutates, and rearranges its constituent parts into various combinations and layers of overlapping sonorities, and patiently builds a tension of sustained, resonating sounds.

Dafeldecker’s “Redeem” concludes this unique collaboration. This piece offers another elusive atmosphere as the low, saturated tones of the organ and the double bass are disturbed by ripples of mysterious noises but are determined to reach a desperate kind of musical stasis. Later on, the organ re-enters with brighter, lighter chords, together with bowed metal instruments, and this composition is concluded with layers of sustained, inventive organ and noisy percussive sounds, all seem to be liberated from the concrete realities of instrumentation by this distinct acousmatic context.

You may need few, intense listening to Unseen, but then there is no way back. You probably would acquire new sensitivities and perspectives about sound over all, acoustic vs. electronic, layers of sound, sound, and space, and most importantly, the ambiguous qualities of sound.