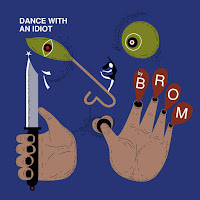 Mats Gustafsson's enthusiastic endorsement for the Russian band Brom - Бром eight album and first international release, Sunstroke (Trost, 2018), exposed this fine band to international audiences, calling it a band that breaks and fucks the frames. And, indeed, Brom sounded then as feeding on the same gene-pool of Gustafsson’s bands, particularly The Thing, but also like-minded seminal bands as Peter Brötzmann’s Last Exit, John Zorn’s Naked City and the Zu. The new album from Brom, recorded at DTH Studios in Moscow in March 2019, varies this list of influences with a surprising yet iconoclast jazz musician, the great trumpeter Dizzy Gillespie.

The new album, Dance with an Idiot, suggests a new incarnation of Brom, savage, raw, rapid, and manic Brom. The heavy, dirty and distorted bass guitar of Dmitry Lapshin is in the center, much like Zu’s Massimo Pupillo, dominating the grinding pulse, the volition, and the level of brutal onslaughts. Alto sax player Anton Ponomarev can compress a series of tortured screams and cries within a fraction of a second but he is also the only one in Brom who injects some melodic sense into their pieces. Electronics player Felix Mikensky, who joined Brom on Sunstroke, adds guitar to his arsenal and his inventive and often ironic noises intensify the commotion, always with a perfect sense of timing (check his contribution on the last “This Is A Good Club Though Some Bad Music Is Played Here”). The drummer Yaroslav Kurilo, on the other side, opts to contrast the furious, anarchistic attacks of his comrades with light but precise swinging hits on his drum-set.

There are few detours from this heavy grind approach, especially on “Goodbye, White Rhino!” where Lapshin surprises with a warm, lyrical tone. Brom is still addicted to John Zorn compositional tricks, mainly the sudden, fast turns and stops à la Naked City or sketching tense postmodern, film-noir-like texture. The cover of Gillespie’s bebop chestnut from the early forties “Salt Peanuts” (titled here “Salty Peanuts”) misses all the playfulness and fun of the classic piece. Brom’s punkish version focuses on the simple rhythmic riff, committing it to the demolishing grind and deconstructs it and reconstructs it again and again with a brief, minimalist articulation of the melody by Ponomarev later on.

You have to take your chances when you dance with such wild ones.

Nope, this one is a killer !

Brilliant music. Less cross over more head on collision! Yes it's agressive but it's also fun.