Since discovering Berlin’s echtzeitmusik scene just a few years ago and building a partiality to much of the music it produces, I’ve eagerly awaited recordings from a few musicians that particularly peak my interest yet release things sparsely. Flautist Sabine Vogel is one such musician. So I was ecstatic to find these two releases from this year, both of which provide excellent showcases for her musicianship. 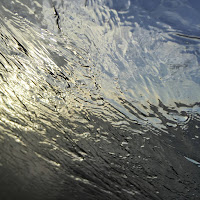 Musicians have reacted to the isolating conditions of a world in pandemic through various means, from releasing sat-on archival recordings, to wrapping up and releasing recent recordings more quickly than expected, to recording and releasing new -usually solo- projects during the pandemic. isolated . connected falls in the latter group, but with a process to simulate the communal improvisation that is vital to this music and so difficult to achieve recently.

The five musicians here are Vogel (bass flute, preparations), Michael Thieke (clarinet), Kaffe Matthews (digital oscillators, samplers), Audrey Chen (voice), and Id M Theft Able (voice). Beyond Splitter Orchester, Vogel and Thieke have recorded together on SCHWIMMER’s 7x4x7, to which this is a spiritual successor, and Rutger Zuydervelt’s Stay Tuned. And Chen and Able have recorded together on On Teufelsberg. I don’t believe any of the other musicians have previously recorded together, but it’s worth mentioning that Matthews released the acclaimed Foreigner this year.

Vogel’s and Thieke’s solos come first, both accenting silence with mostly clicks, breath, and spit, but whereas Vogel’s piece seems to focus on breath velocity and volume, Thieke’s piece seems to focus on embouchure, with parting lips, swallowing, and tongue and cheek movement closely recorded. Their timbrally diverse duo is a highlight of the release, with Thieke’s response almost creating small rhythms with Vogel’s pulses, but at this time it sinks in that you’ll hear them five times each, which is a positive because you can hear the process but might be too much repetition in one sitting. Matthews’ response to Thieke stands in almost abrasively stark contrast to the previous two solos, with sustained electric tones undulating, throbbing, swelling, and occasionally glitching out. Her volume control and pitch transitions match nicely with Thieke but, having not heard Vogel’s solo, don’t mesh well and often drown out the best of the acoustic duo in the trio track. Chen’s solo is an exposition of extended vocal techniques, with breathing, stuttering, sucking, gurgling, yawning, clicking, modulated vocalizing, and more, which overlay with Matthews’ track unexpectedly well, complimenting the pulse of her drones and glitched clicks and cuts. Able’s solo is more extended vocal technique, but whereas Chen seems more lungs and lips, Able seems more throat and cheek, and whereas Chen might be considered somber, Able is definitely comedic. As a result, their duo is another highlight of the release, displaying disparate outcomes through similar approaches, almost like Vogel and Thieke’s duo. The final quintet is impressively cohesive, despite the musicians not necessarily communicating directly with most others, and characterized by chance cycles of rhythm and resonance the close listener can piece together. Matthews’ drones seem to get progressively lower in the mix with the quartet and quintet, and, rather than drowning out the two acoustic duos for the final piece, provides a springboard from which the other musicians interact with each other.

There’s some cognitive pleasure that comes from hearing this process of musical telephone, but there’s also a sense of hearing the same thing too often, despite approaching it in a different context. And while the final quintet might be my favorite track I’ve heard this year thus far, especially because of the simultaneously similar and dissimilar approaches in the wind and voice duos, there’s a sense that the digital oscillator occupies so much space as to be distracting. Still, isolated . connected is an exemplar of the process-based, near-scientific sonic exploration that characterizes the best of the Berlin scene. Vogel states this is an ongoing project, so look forward to new exciting directions from this very solid foundation.

isolated . connected is a digital-only release. 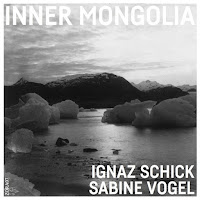 Ignaz Schick recently started his label, Zarek, as a means to release some stellar archival recordings with musicians including Paul Lovens & Clayton Thomas, Toshimaru Nakamura, and others. Inner Mongolia documents his collaborations with Vogel from 2008 to 2011, with nine tracks across 54 minutes. Drawing from a long period of what sounds like studio environments, it allows for a grand variety of instrumentation, with Schick on turntables, motor, objects, gongs, cymbals, bows, and electronics and Vogel on flute, bass flute, piccolo flute, pedals, and samplers.

Schick and Vogel previously recorded a track for the Echtzeitmusik Berlin compilation, “Inner Mongolia,” from which this release takes its name and which appears as the first track (under a different name). As expected from these musicians with this amount of instrumentation, the music is a diverse ecosystem of sonic color. And, as is often the case when this kind of music is more freely played, the sound can assume cinematic or picturesque qualities. The twinkling chimes, bells, and gongs become the stars over the windy, foggy bay of whistling flute static with a sonorous foghorn overlayed on “Hohot.” A kind of sucking and harsh air notes with tape static, pop, and warp feels like a desiccated, decayed apocalyptic landscape on “Baotou.” Or a flute buzzing like a fly, creaking like grasshopper legs, or fluttering like moth wings creates a world of insects “Hulun Buir.” The amount of sounds here is simply impressive, with purring motors, vocal multiphonics, string-like strained sustain, flute like didgeridoo, and a rubbery ping-pong bounce recalling Autechre being just some of them.

Compared to similar recordings, there’s a bit more movement, volume, and action here. It’s still not exactly sing along music, but you can listen to it in the car without the ambient whirr drowning it out. And the communication through textures, pulses, volume, and density are so aptly reactive and complimentary as to seem unimprovised at times. Here’s to hoping the collaboration is ongoing.

Inner Mongolia is a digital-only release.