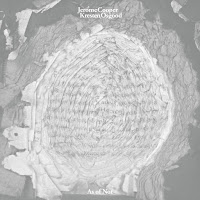 Something about this album grabbed me right from the beginning. Maybe it was the fact that this is an album by two percussionists that is not percussion heavy. Maybe it is because this is seven-part suite is one of Jerome Cooper’s final works and recordings. Maybe it just sits right.

As of Not consists of Jerome Cooper – formerly of the epic Revolutionary Ensemble and sundry projects since - on drums, chirimia, balafon, and electronic tonal activator and Kresten Osgood – Dutch percussionist extraordinaire - on drums and piano. The percussion is there and sometimes layered but hardly consumes the pieces. For example, it takes almost seven minutes for the ambient electronics and piano to give way to a piano-balafon duet – performed in frenetic unison - in the As of Not Part 1. Part 2 is a flood of sound –chirimia, piano, and synthesized winds – opening for a steady drum beat only half-way through, then a spirited, broken-funk free-for-all led by Cooper’s chirimia and Osgood’s keys that take the track home. These pieces have so much variation in sound, mood, and color. They have so much energy – potential and realized – and always over a gathering storm of soft but churning synthetic sound. Part 3 begins a soulful chirimia and a sparingly deployed thud of a drum-set and, even with a gradual intensification and the addition of the tonal activator, keeps up the 70’s rooted meditation on a simple but deeply moving theme. Part 4 is a whirlwind of gusty chimes lain over a steady back beat, which evolves into a steady into a military cadence. Part 5 offers a mucky and disjointed take blues-plagued drum-and-bass. (The blues comes in the last few minutes of multiphonic euphony). The last two parts are shorter briefer meditations on similar, though somewhat spacier (Part 6) and jazzier (Part 7) themes.

Among the comments of a recent post on FJB , there was a brief but interesting discussion about what is “new” amidst all of this music that seems to be looking back to the paradigms of the 1970s. (That, of course, was when Cooper cut his chops with Leroy Jenkins and Sirone.) Including As of Not might complicate that discussion, not just because of the personal continuity Cooper embodies, but because of how firmly it is simultaneously rooted in spiritual jazz (think Sanders, Coltrane, and the more Egyptesque Sun Ra) rhythms and ritualism, the Revolutionary Ensemble’s dedication to genre-blending (though in a decidedly different form), and contemporary tendencies toward deconstruction. I am not sure I can put my finger on what exactly is new in all of this. But I can attest that, regardless of novelty, As of Not is some genuinely powerful music.