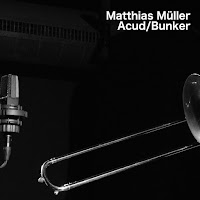 Trombonist Matthias Müller showcases the growth of his expansive, distinctive style on two freely-played solos lasting 52 minutes on Acud/Bunker. Müller recorded “Bunker” in 2016 just a few months after his first solo recording, solo trombone , and recorded “Acud” in 2018. Müller’s reputation seems to place him as a team player, adapting as much to near-silent soundscapes of extended technique as to energetic, fiery free jazz (demonstrated well by the contrast between the recently reissued Super Earth and Live im Künstlerhaus ). solo trombone provided a vital document of his style and a catalog of his technique in a vacuum; Acud/Bunker seems to provide a document of the development of his style and technique with the time between recording dates.

“Bunker” is a 28-minute set with a small break and some applause kept in the middle of the recording. It’s a timbral collage featuring a breathy static modulated with pressure play, air notes like flickering flames, deep throaty oms punctuated with tinny muted swells, foghorn blows, balloons deflating, muted wah wah morse code, and a kind of metallic tapping like a typewriter, among a menagerie of other sounds. Sometimes the sounds are just sound; sometimes they play to the carnivalesque, jocular, suspenseful, or noirish moods the instrument is so often called upon to personify. And Müller is just as comfortable injecting more traditional tones - including the teacher from Peanuts - into the mix with his more exploratory timbres.

The foundation of “Acud” contains many of the same elements as “Bunker,” though with additional timbres like his valve release air notes, air notes like sand across a snarehead, draining or sucking incorporated in the breathy static with more saliva and new embouchures, horse snorts, and machine gun staccato. It might be partly due to better mic’ing, but the increased dynamism in breath- and mouth-play that can be heard here is significant. Whereas “Bunker” is a relatively rapid-fire barrage, “Acud” takes it a step further, containing a lot of continuous play achieved through circular breathing. And the moods mentioned previously are here too, with a particularly suspenseful dyad recalling Grachan Moncur III’s efficacy in simplicity (e.g. “The Twins”) and building from a kind of alarm to a buzzing swarm. This is a really solid set that shouldn’t be missed.

So, for those that have been following Müller, what’s here won’t necessarily surprise but provide an affirmation of the reasons why they started to follow him. For those that haven’t, this is a great introduction to a top notch trombonist that’s always expanding the vocabulary of the instrument and themselves. It serves as an excellent companion piece to solo trombone, demonstrating the instrumentalist’s growth from that point. Like his debut solo, it again provides vital documentation of his distinctive style outside of a band. Recommended.

Acud/Bunker is a digital-only release.