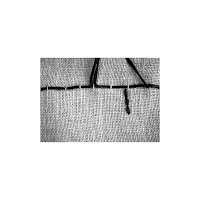 Nate Wooley (trumpet, electronics, text) presents three sketches - two 18-minute solos and one piece of prose - that he might expand on at a later date on Three Studies for Future Uncertainties. This is the first release of the Tisser Tissu label, an imprint of Wooley’s Pleasure of the Text label, which intends to accompany each release with contextual information and media. For example, the two tracks here have accompanying explanations but also visual art to enrich listeners’ understanding of the works. To explain the context of the label, Wooley provides a brief etymological lesson on the name, explaining that these Old French words for weaving and fabric derive from the Latin that gives us the English word for text. And he goes on to explain the perspective of literature as a weaving of many threads, to be unraveled and rewoven by the reader into a tapestry of their own understanding, and unraveled and rewoven again with each revisit as the reader collects new experiences that change their interpretations. Presumably context provides an understanding closer to the creator’s intent (whether they’re an unreliable narrator or not), but the explicit purpose here is simply to provide more material to chew on, with the hope that it provides a more engaging, dynamic experience. Three Studies for Future Uncertainties certainly provides that.

The context for “Study for a Mass” includes: the music of Harry Partch, Chris Brown, James Tenney, and Catherine Lamb; David B. Doty’s three-dimensional lattices for just intonation in Just Intonation Primer; a “creative misunderstanding of Kant’s idea of form and content;” the grid drawings of Agnes Martin; the parts of a mass service, inspired by Wooley’s perceived quietism in Martin’s works; and the embroidered graphic scores of Jen Mesch’s Soft Red, Hard White, details of which are included in the physical booklet and on the cover. The compositional process involves drawing grids inspired by Martin within lattices from Doty to explore harmonic shifts in just intonation. While the intention is to use this compositional process within the framework of a mass (Kyrie, etc.), the track here is a proof of concept and not a mass movement. The music is all electronic sine waves, multitracked to produce a grand polyrhythm of undulations, oscillations, purrs, hums, throbs, ringing, and singing. You can hear synthesis. And a portion of these frequencies seems to replicate the warm whirr of an organ, contributing to the spirituality invoked by the subject matter. Most of the music I’m familiar with that explores elements of drone and just intonation are glacial compared to other music, but this is quite lively, dynamic, and almost hyperactive. I’m enthusiastic about Wooley exploring this aspect of music and looking forward to the full mass but, while the pacing is probably more engaging than similar musics, I feel it would need to be adjusted in some way to reflect the gravity and gnostic quietism presumably intended.

“Intermediate Wobble Study” is an expansion of a commissioned piece with the prompt, “what is the sound of creation?” Wooley’s concept of creation is less big bang and more planetesimal accretion, with changes in mass causing a gravitational wobble before the system tries to approach equilibrium, only to accrete more and wobble again. The music is tape-manipulated snippets of acoustic extended technique from trumpet, with air notes, ‘dead’ notes, whistles, close-mic’d embouchures, and more cut to collide in sonic space, seemingly mimicking accretion. Every few minutes, Wooley cuts in sine waves to create a stacked melody that then dissipates, signifying the wobble. For fans of the clicks and cuts of glitch and similar musics, you’ll find this sounds very similar to Vladislav Delay’s “Anima” with the melody from Autechre’s “IV VV IV VV VIII.” Though the sound itself seems derivative of another kind of music, I’m excited to see Wooley exploring tape manipulation and post-production of acoustic extended technique, which I believe opens promising doors to an already genius musician.

“A Story Based on Robert Graves’ The White Goddess” is a very short prose piece inspired by Wooley’s solo series, Coyote, as well as the work in the title, which he read during the composition and/or performance process of the series. I’m not aware of a recording of Coyote, but the process he describes recalls his Syllables music, in which he translates textual or linguistic elements to embouchures for new sonic possibilities. And while I’ve not read The White Goddess, I’m vaguely aware of its almost structuralist approach to myth and criticisms concerning its characterization of women and Judaism as well as its historical veracity. This story is broadly about a man ecstatically describing a mythical image of a woman and the boon he receives from her out loud while the woman sitting next to him is more realistically describing this man and the absurdity about him in an inner dialogue. The man’s description is mostly symbology, often recalling classical goddesses, to create a single liminal persona embodying life and death. I get the sense that Wooley is romanticizing himself as a rough, handsome sailor through the woman’s description, but it’s comparatively real. My general interpretation is that the story is directly related to and siding with the criticisms concerning the characterization of women in classical symbology. The story’s brevity and the very direct inspiration from The White Goddess make it difficult to showcase or even discern Wooley’s style in the piece but, given his work with translating linguistics to embouchures, poetic inspiration to music, and editorial duties with Sound American, it makes sense he would take a stab at stories. The emphasis of composition, process, and symbology in his music is here, but the tonal and timbral vocabulary of his music doesn’t quite seem reflected in his diction.

Despite some nitpicking, I consider this an addictively listenable (and readable) release demonstrating the groundbreaking depth we’ve come to expect from solo Wooley releases with new breadth never before recorded by the musician. There’s a thoroughness of concept in these studies not often seen in fully-developed pieces. If any one of these sketches were presented in completion, they would surely each be “five stars.” For now, support these endeavours - each robust listens and reads even in these germinal stages - in the hopes that we do get the full mass, the advanced wobble, and the first full publication of Wooley’s fiction.

The sound of Three Studies for Future Uncertainties is a digital-only release; the text is available digitally and physically.

Thanks so much, Martin!