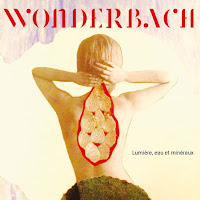 Spending so much time at home, I have found that music has been affecting me different lately. Maybe I have been listening more (check) or more attentively (check) or maybe I simply cannot engage in the live activities that previously activated those parts of my brain (check). Still, more releases have seemed not just good, but genuinely exciting to me. Lumière, eau et minéraux (Light, Water and Minerals) is among those.

Wonderbach is a group of French improvisors consisting of Marie Takahashi on violin, Olivia Scemama on contrabass, Yann Joussein on drums, and Manuel Adnot on guitar. This is almost a chamber quartet and, indeed, sounds like a chamber quartet despite the modified instrumentation. The group evokes movements, waves, and colors. It sounds neo-impressionistic, which I am equally sure is a musical term and one which usually applies to musical forms altogether different than this. But, between the shading, the blurring, the exaggeration, and the uncertainty, the term still seems appropriate.

For all of its activity and clattering, Lumière, eau et minéraux is calm, even with the consistent presence of percussion. Rather than driving the music or filling the air with loud bangs and crashes, Joussein’s drums fill out the music. After several listens, I cannot shake the image that the drums assume the role of a consistently heavy drizzle pressing through leaves, ricocheting off branches, and bursting upon overturned buckets, tree stumps, and other artifacts of varying timbre. Takahashi, Scemama and Adnot, then, break through the screen of rain with foggy, resonant shapes that, over the course of each track, articulate themselves in unanticipated curves, angles, and blurs. The listener is caught in a storm, but safe and sheltered. What happens outside might be glanced through a window but is still just a different expression of that storm, on the other side of security and comfort. Strange forms appear and disappear, but do not necessarily disconcert as they remain at a distance. (This might seem counterintuitive as the recording sounds close, but with that closeness also comes a wooden hollowness that implies a protective boundary.) Nevertheless, they remain curious. The haze might just be light refracted at the entanglement of condensation and downpour, or figures coming into perception because they break the textured monotony of the rainfall. Or, these bodies - never staid, but always in the process of coming into or out of focus - might simply be mental projections. But, somehow, one gets the sense they are somewhere out there, even if their distinct forms and matter remain nebulous.

Clearly, this album got me thinking. It is provocative in an unassertive way. Meditative, without the pretense and hodge-podge spiritualism of less well-conceived neo-transcendentalist projects. Or, maybe Lumière, eau et minéraux really is just beautifully and mellifluously discordant rain, out of which the listener can make what s/he may.