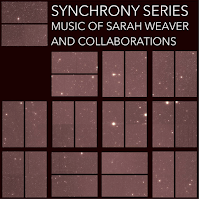 New York-based experimental composer-conductor-researcher Sarah Weaver explores distinct concepts of synchrony in her new volume of compositions. Her fascinating, colorful sonic manifestations of the concept synchrony serve as a metaphor for inner realization and liberation of the self and are realized in a spectrum of modes, personal but also political ones. Weaver’s compositions incorporate distinct kinds of notation - musical, graphic and text notation, leave enough space for improvisation and introduce different sets conducting gestures, some are borrowed by Walter Thompson’s system of Soundpainting and original ones by Weaver. She is joined by an impressive cast of innovative musicians, among them drummer Gerry Hemingway, trumpeter Joe McPhee, sax players Jane Ira Bloom and Ned Rothenberg, flutist Robert Dick and double bass player Mark Dresser.

Hemingway opens the first disc of this double album with “Node 111, Volumes 1-3 (2011-2016)” or solo drum-set, originally performed on Weavers’ Reality Axis for Solo Percussion (2016). Hemingway layers dense but highly detailed, resonating, rhythmic patterns with great control and imagination even when these patterns become quite chaotic, but, apparently, express the multiplicity of the self and inner synchronicity. “Symmetry of Presence (2018), for the duo of bass trombonist David Taylor and Weaver herself on electronics symbolizes metaphysical synchrony and suggests an open texture about torturing but quite tangible, noisy doubts blended with exotic Far-Eastern meditative ritual but also playful and uplifting observations.

The second album begins with the most engaging and emotional composition in this volume, “Sound in Peace (2016)”, dedicated to Weaver’s reacher, composer Pauline Oliveros, and performed by Joe McPhee, who also collaborated with Oliveros, on pocket trumpet and Weaver herself on spoken voice, electronics and chime. This composition-improvisation “synchronizes healings across lifetimes” and references Oliveros sonic meditations. Weaver chants the title as a powerful mantra while McPhee freely improvises his own imaginative incantations. A true calling for deep, proactive listening.

Closing this volume, the 53-minutes “Universal Synchrony Music: Kepler/K2 (2013-2019)” for the telematic NowNet Arts Ensemble, featuring in New York conductor Weaver, Ira Bloom, Dick, Min Xiao-Fen, Rothenberg, Maroney, and Dresser; In Chicago Stephan Moore and Kieran Maraj on electronics and in Toronto Doug Van Nort on electronics and sonifications. This delicate, chamber-electroacoustic-atmospheric - literally - composition was conceived with NASA and refers to the cosmic synchrony over an extreme geographic distance such as habitable planetary systems in deep space as explored by the NASA’s telescope Kepler/K2 Mission. This composition incorporates sonification of data from the Kepler’s mission on stars and planets 1000-3000 light-years away and harmonizes the cosmic sounds by creating the perception of synchrony across local and extreme distances. A strange but arresting journey through sounds and sonic universes.