Olaf Rupp is possibly the most renowned guitarist in the German improvised music scene. His technique is unique, since he plays his electric guitar in an upright position, which is inspired by Chinese pipa players. Rupp has taught himself to play the guitar and has almost naturally included several elements like rasgueados, arpeggios, harmonics and tremolos from the very beginning, so his signature overtone and cluster effects come off very natural. He’s neither interested in the ecstatic effect of free jazz nor in creating mechanical idiosyncrasies. He has described his sounds as “analog granular synthesis“ or “sonic pointillism“. Especially the latter term describes his style very accurately since it refers to the idea of creating a complex flow of sound by mixing simple (and single) notes into one complex tonal structure. Rupp’s music weaves small electrically charged particles together and shoots them into the billowing darkness, as if he asked questions to the sounds he creates. Every note is of the utmost importance in this philosophy, without it the sonic texture wouldn’t be complete. He creates a moving sound, no melodies. In an interview he said: “To me music is only sound in motion. And this motion should be free, unrestricted and direct. That was my natural perception, right from the beginning. So my roots are in abstract, free improvisation. I started with that when I was twelve.“ 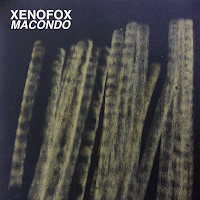 Macondo is a fictional town in the novels of Gabriel García Márquez and a real commune in Angola. It is also the name of an oil field close to the Gulf of Mexico, an accident there led to the devastating black tide in 2010. A refugee camp in Vienna carries the name as well.

Guitarist Olaf Rupp and drummer Rudi Fischerlehner created the title for this track after the recordings, no attempt was made to conjure a certain mood in advance. One day during the mixing process Rupp wrote Fischerlehner an email which only consisted of the word “Macondo“. The word, with its various meanings in relation to literature, the world, political and natural disasters, appealed to both as an image, it sounded like the idea of an interweaving and interpenetration of art and reality.

At the beginning “Macondo“ literally bathes in a sea of stuttering drum clicks, shimmering harmonics and reverberations. When Fischerlehner lets the clicks fall out and concentrates on the toms, Rupp contributes dark drones that overlap with clanging tremolos and dub-like twangs. Fischerlehner’s percussive onslaught brings out linear qualities in Rupp's playing; he sends jagged, gurgling chords and gnarled knots of notes sailing over the drum clatter, sounding almost like Sonic Youth extemporizing over a riff, the somber dissonances being somewhat elegiac. Beyond Xenofox’s facility to create such gloomy soundscapes, there's also a tactility to their music - the scraped guitar strings and vigorously stabbed chords, these ghostly amplifier hums - that has a cinematic quality, especially when the piece sinks into a vortex of hell in the last five minutes.

“Macondo“ is also track which connects with “Zeitforschung“ from their last album Hundred Beginnings. Fischerlehner says that they are interested in examining “this crash of rock music reminiscences - riffs, loops and kick-snare hi-hat grooves - but at the same time to remain structurally flexible and multidirectional as to the improvisational communication“. “Macondo“ is their best attempt so far.

Macondo is an 18-minute piece, a mini album, available as a download only. You can listen to it and buy it here:

If you can afford it, please support the musicians. 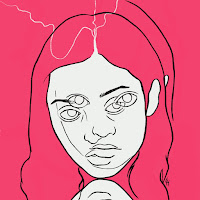 “The moon heard jackals howling through the deserts of thyme, - and the sabot-clad eclogues growling in the orchard. And, in the violet woods, Eucharis told me it was Spring.

Gush, pond; - Foam, roll on the bridge and over the woods; - black palls and organs, lightning and thunder, rise and roll; - waters and sorrows, rise and unleash the Floods.“

Olaf Rupp and John Hughes, an American bassist who’s been living in Hamburg since the 1990s and who teaches at Neumünster Conservatoire, have prefaced their album Plursathn with an excerpt from a text by French poet Arthur Rimbaud. While Xenofox's music still has a certain narrative and cinematic character and, despite all its structural flexibility, tends to be dramaturgically elaborated, Plursathn, like Rimbaud’s poems, tends to be abrupt and acausal. There are small episodes, but no longer is there anything consistently narrative, hardly any chronology or logic. The only red thread running through the fabric of the individual pieces is the erratic associative power of the musicians, who indulge in an errant fantasy.

In contrast to the guitar/drums outfit Xenofox, a guitar/bass collaboration naturally offers different possibilities. You can imitate each other directly or even more obviously counteract your fellow musician, arpeggios can be used by both at the same time or to contradict. Creating textures is more obvious, the interplay is even more fiddly. Unlike Xenofox, Plursathn has almost nothing to do with rock, which is mainly due to Hughes double bass, which rather pushes the music into a chamber music corner - say Joëlle Léandre meets Thurston Moore.

A prime example of their music is “dezenbar“, the central piece on Plursathn. Short runs are juxtaposed with drones, from both guitar and bass, the players easily change sides. The whole construct of the piece is constantly shifting in intensity and focus. We hear colliding surfaces of low notes set against glass overtones and an almost infinite range of surface topologies. They fade in lost bass runs and reverberant feedback. Sound conceives the form when Rupp and Hughes scratch and rattle, echo and drone, just to give shape to something latent - transience, instability and changeability. They radiate energy in a surge of bowed resonance and sparkling string work, gradually revealing finer nuances and gradations. Rupp and Hughes use this for 17 minutes with amazing variety in a process of constant communication - they exchange, encourage and challenge each other.

Plursathn is available as a download only. You can buy it here, where you can also listen to parts of the album:

The record of Olaf Rupp and John Hughes is highly recommended. It is a dialogue between two musicians who really listen, react, take ideas and transform them. John Hughes organized and hopefully will continue to organize concerts here in Hamburg with musicians from near and afar. The video is a concert from the Stubnitz, a former GDR fish trawler transformed into a party/concert boat lying in the harbour of Hamburg. Among many other kinds of music Free Impro found and hopefully will continue to find a home there. I will check out the other duo with Rudi Fischlehner.