A Trio of Trios

This is a review of three recent trio recordings. There’s nothing ground-breaking, no boundaries being pushed, an absence of messages, just solid, attentive improvisations drawing on an accumulated language and mutual understanding that leave the listener enriched – a modest enough goal. One of the intriguing things about working through these albums was hearing the shift in the internal dynamics of each group, due in part to their configurations but also the antecedents which all improvisors reference, consciously or otherwise, refracting the past into the present while maintaining distinctly personal modes of expression; confirmation that continuity and originality are not contradictory impulses. What the performances have in common however, is a sense of shadowing and reinforcement, seeking an equilibrium through give-and-take, often achieved by way of fine adjustments that allow discrete yet complimentary lines of thought to be voiced together and developed in parallel, variants on Ornette’s “You can be in unison without being in unison.” 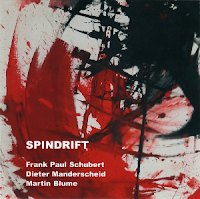 I’m a sucker for saxophone, bass and drum trios which seem to run through the history of free jazz like a golden thread. It remains a format that provides fresh inspiration, and here we have Frank Paul Schubert (alto and soprano saxophones), Dieter Manderscheid (double bass), and Martin Blume (drums, percussion) – all stalwarts of the European scene but their first session as a trio – at LOFT, Cologne in April last year, and splendidly recorded it is too doing full justice to the group’s scrupulous attention to movement, weight and texture. There are two lengthy improvisations both lasting about half-an-hour that unfold in a sequence of organically related episodes, their breadth sweeping the listener along.

On ‘Gail’ Schubert’s serpentine themes grow inexorably from within their own contours, swelling and contracting with an easy grace, from time to time taking on an acerbic edge. Bass and drums fill out a resonant, crackling space around the saxophone, labile forces alert to the fluctuating balance. There’s a concentration on the intricacies of musical ideas, a progression and focussing of purpose according to a generative logic. Schubert follows implications, tests alternative possibilities, and turns existing components into something new, all linked together and reminiscent of the processes at work in the music of Steve Lacy and Evan Parker. Cymbal strokes have the fragility of wind on water, drums scrape, tiptoe and chatter, the bass delineates firm countermelodies overlapping like tendrils with the saxophone. Collectively the trio creates the impression of an ornamented fabric of shifting patterns.

This is also warmly expressive music with passages of great beauty. During ‘Leucothea’ (a Greek sea goddess) Manderscheid’s graceful bowing is framed by multiphonics and percussive tinkles, layers that blend, surge and are washed away leaving a fragile soprano melody, time-stopping and serene, which gradually brings the trio together rising again in a slow crescendo to close.

Spindrift is a CD only release. 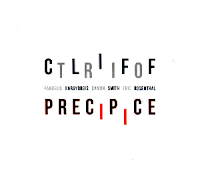 Like the saxophone trio, the standard piano trio continues to be a fruitful arena for group drama. As the pianoforte’s original name suggests it has a touch capable of ranging from eggshell delicacy to grand orations and the Cliff Trio – Pandelis Karayorgis (piano), Damon Smith (double bass) and Eric Rosenthal (drums) – delivers something of both, taken from two performances at the Lilypad, Cambridge, Massachusetts during 2019. Their first encounter was released as Cliff (Driff Records, 2018).

This is music of strong contrasts balancing the energetic and meditative, and with features of the tradition providing inspiration within a contemporary setting. ‘Precipice I’ and ‘Precipice II’ are the longest pieces, from June and March respectively, and can be heard as two different takes using the same basic components with similar peaks and troughs. Karayorgis moves from heavily compacted motifs to elegant fingerwork then hammered chords bouncing between registers, separated by solos from the other members of the trio offering their own perspectives.

Across the album the dominant lines are often enclosed in a tight dialogue between the left and right hands of the piano, superimposed and turned inside-out, using material and in an manner that suggest – to my ear at least – a combination of Art Tatum and Monk. Tiny seeds spawn ever more elaborate figurations whose rhythmic drive is matched, though not imitated, by Smith’s vigorous plucking and the roll and tumble of Rosenthal’s drums. On ‘Notch’, after a wispy, bowed introduction on the bass, Karayorgis’ lightly spun phrases float across the keyboard with a crystal economy, increasing in colour and density and eventually building into thunderous waves of sound.

The album is available on CD and as a download. 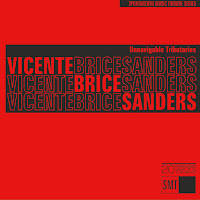 Here, we have trumpeter Luis Vicente with the British duo of Olie Brice and Mark Sanders on double bass and drums, recorded at a Lisbon studio in May last year after a short tour of Portugal. The familiarity gained during successive dates might explain the confident manner in which the trio manoeuvres through its improvisations, each named after a tributary river, a useful metaphor in considering how this music flows into something larger, pervious and alive to varying currents. Despite the album title there are no obvious issues with navigation with each alteration of course sustained by Sanders’ customary crisp, buoyant drumming.

Recorded with impressive clarity there’s a plentiful mix of both method and mood. Vicente employs a variety of techniques, from the phosphorus gleam heard on the opening ‘Côa’ to squeezed notes, smudges and growls, but always in the service of musical needs. On occasions, such as the latter part of ‘Tua’, he restricts his register and develops sounds through different kinds of breath attack and subtle articulations, a narrowing of focus that seems to increase the expressive range of his instrument. The music can be pensive or animated – on ‘Sabor’ there are shades of Miles as Vicente plays with a mute throughout unfurling a poignant, slightly broken melody; ‘Paiva’ is propelled by the trumpet’s spatter and squiggly twist, elastic and loose over Brice’s well-sprung bass and Sanders’ scattergun yet always precise percussion. The trio also explore more diffuse spaces. Over the course of ‘Tavora’ all that is solid melts into air. Vicente’s long, modulated notes are surrounded by metallic rings and cymbal decays, elements come together in eddies and dissipate, and the piece finally dissolves into fine sprays of breath through the trumpet.

Unnavigable Tributaries is available on CD and as a download.