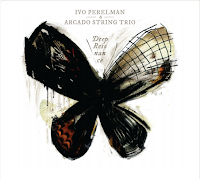 The Arcado String trio comprise Mark Feldman on Violin, William H Roberts on 'cello and Mark Dresser on bass. Nothing unusual about a string trio - until the pedigree here is realised. Mark Feldman has performed with John Zorn, John Abercrombie, Billy Hart, Dave Douglas and as part of the Masada String Trio. He was a member of the Civic Orchestra of Chicago and made over 200 recordings in Nashville including some with Loretta Lynn and Ray Price. His solo and collaboration work show an eclectic and prolific musician who, over a long career, has worked across genres and with a variety of performers including Chris Potter, Lee Konitz, Bill Frissell and many more. Recordings as leader include several on Zorn's Tzadik label and as sidesman with Ray Anderson, Tim Berne, Marc Ribot, Anthony Braxton and many more.

William H Roberts has worked with Bill Frisell, Tim Berne, Jerome Harris, Alex Cline, Sting, Andy Summers and more. He has his own sextet and for almost four decades has been an original voice on cello and as a composer.

The three musicians are also Arcado String Trio and have recorded several albums including Arcado, Behind the Myth and For Three Strings and Orchestra.

To these three add Ivo Perelman, a musician who started out as a prodigy on guitar and who loved strings before he took up the tenor saxophone and found the instrument with which he would forge a career. Perelman however, has never lost his love or understanding of strings and has worked with string combinations before. The chance to record with a trio which Perelman admires and believes bring out the colour and character of music was not one to pass and the result is Deep Resonance - an apt title because the music carries with it combinations of tones which come from the deepest parts of the music itself.

'Resonance 1' begins with a gentle introduction and tentative entrance from both strings and saxophone. A gradual build of both tone, volume and pace sees the musicians sensing their way, exploring interactions and reacting to each other in ways which echo their different characters. Perelman's voice on tenor saxophone never loses its command yet there is a sense of listening too as the violin and 'cello weave their way around Perelman's decisive phrases. There are several points when the tenor and 'cello meet on those wonderful shared tonal notes of both instruments, each player seemingly deliberately seeking these points of union and when they do the violin chirrups and soars across the top, anticipating and relishing the points of union and also those of diversion. A lovely section is when the arco'd cello is subtly behind the choppy rhythm of the violin, its deeper voice adding emotional overtones to the excitement in the strings. The violin at one point ascends whilst the bass descends, widening the range the listener hears exponentially. At times, the sax is lost in the mire but regularly emerges to echo or lead the trio in another direction. The ending is classical in tone and beautiful in nature.

'Resonance 2' begins with Perelman offering simple introductions which the strings pick up and develop into individual tracks, linked by key and progressions but at the same time divergent, surprising in their changeable essences. The depths of the bass and the treble of the violin, switching from pizzicato to bowed and back, inject energy and contrast, which the altissimo of the tenor adds another dimension into the higher registers. A little top-heavy at times nonetheless this track is laden with intrigue in spades. The held note section is one of crazed harmonics and does the ears a power of good. Perelman on this track is gentle, his notes places with infinite care and precision, his additions like a fourth string instrument at times and the final section is pure genius.

'Resonance 3' begins with deep, thrummed and struck strings which reverberate and go through the listener, charged with energy over which the violin, after a suitable length of time to allow the resonance to be absorbed, enters along with tenor sax whose altissimo echoes its notes. The 'cello is melodic over the thundering menace of the bass in the second minute before Perelman's tenor introduces mellifluous and repeated melodies, each a tone or third apart before a trill sets a new section off and the violin adds triumphant, decorous overtones to off-set the still threatening bass, which fades as the sax and violin trade phrases over 'cello. The violin introduces a set of descents, repeated both in rhythm and note patterns, the final one of which is sung across by the tenor, creating a beautiful passage en deuce - subliminal yet also beautifully worked. There follows an intricate exchange of bass and sax which acts as a conduit into which the others drop.

'Resonance 4' begins with pizzicato violin over sonorous bass which develops a rhythmic gait. The sax enters to chirpily squeak and sigh in turn over the top, whilst descending glissandos abound. 4 note riffs are interspersed by the bass line, working up and down before there is an organic shift and the musicians are together with immediacy and uncanny anticipation. At times the sax and violin appear to meld and re-emerge carrying the other's notes. Perelman's altissimo speak is characterful, goes out of the key very briefly to return almost immediately but the dynamism between metal and wood is immense. Wonderful.

Throughout Deep Resonance there is a sense of a quartet, Perelman's intuition surrounding strings of any sort ( including those of the piano keyboard) is profound, which is why he is possibly at his best when working with piano or strings. His intuitive sense of when to take emphatic command, yet also when to drop back is captivating and when he needs to, he can - and does - introduce outrageously disharmonious notes which create a different path along which the other follow as a matter of course, finding the harmonies along the pathways Perelman forges. At other times, the sax follows the line proposed by that of one of the strings - the beauty and charm of intuitive playing. As is often the case with Perelman and his collaborators the way they fit appears to have been crafted in some kind of improvising Nirvana and the result is amazing.