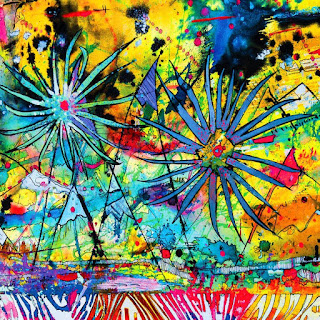 Anteloper is the electro-acoustic duo of trumpeter Jaimie Branch and drummer Jason Nazary. Tour Beats Vol. 1 is their second album after their 2018 debut Kudu, a cassette only release, which explored gritty soundscapes with the urban sonic edge intertwined with plenty of melodic-textural hooks. Branch had the idea for that project in 2018 when she had a residency at Pioneer Works, a former shipping container which is now a studio in Brooklyn, NY. She already knew Jason Nazary from earlier, and he joined her bringing not only his drums, but also lots of electronic stuff like a modular FX unit, synths, sequencers and processors. Branch, who regularly uses electronic devices like synths and delay/looper pedals for her music as well, engineered the session. In 2019 the duo went on tour and they self-produced a super limited-edition tape, Tour Beats Vol. 1, which features recordings from those Pioneer Works sessions, and Branch’s current label International Anthem, possibly the hippest address in avant-garde music at the moment, has decided to release a vinyl and download version.

The idea to combine acoustic drum’n’bass beats with old school electronics and a net of synth sounds might still be a strange concept for some improv fundamentalists, but then again that’s what makes Branch and Nazary’s approach such an inspiring improvisational framework. The percussive drizzle of “Bubble Under“ brings out the obvious linear qualities in Branch’s playing excellently; she sends jagged, gurgling, yet melodic lines and gnarled knots of notes sailing over the programmed clatter, sounding almost like a modern Miles Davis extemporizing over a riff. On “Isotope 420°“ she intricately laces the stuttering snare-beats and repetitive heavy water drop sounds with simple melodies. If there’s a weakness on this album it’s the monotonous electronic bass sounds (on “RADAR radio“, e.g.) or the rather simple synth carpets, but Branch’s trumpet is always able to save the tracks. Throughout the album, Branch successfully adapts her distinctive instrumental language of blurred notes, dreamy hook lines and eccentric trills to an environment, which can only partly be identified as her natural playground. However, her playing is always very lively and she seems to enjoy it a lot. That sense of delight isn't a by-product but a desired outcome, an audible manifestation of the play in playing. Nazary challenges Branch in ways that her Fly Or Die band doesn’t - and therein lies the benefit for the free-improv community.

Anteloper’s Tour Beats Vol. 1 is now available on 45RPM 12’ vinyl in a package featuring artwork by Branch, photos by Richard Ross, and liner notes by Rob Mazurek. It’s also available as a download.

You can listen to it and buy it on Bandcamp.