The legendary free improvising percussionist Paul Lytton released a couple of excellent albums earlier this year that I’ve taken a while to get to, one a studio recording with frequent collaborator Nate Wooley, and the other a raucous live recording with a trio of German musicians. Both records are exemplary instances of Lytton’s creativity beyond the standard drum kit, finding him utilizing his collection of contraptions and electronics in vast and probing improvisations. 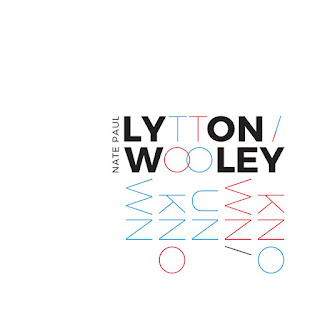 With Known/Unknown we are bestowed with the first Lytton/Wooley duo release in nigh a decade (their last being 2010’s Creak Above 33 on psi), and their third overall release as such, the pair having toured and collaborated together on various projects since the mid-00’s. This set was recorded in Dusseldorf Germany in January 2018 by composer/producer Bojan Vuletic, who also recorded and mixed the duo’s previous two releases and collaborates frequently with Wooley. As Wooley states in the liner notes, the duo wanted to record in a studio where the pair could spread out and he could play amplifier and Lytton could utilize his contraptions and electronics. The studio space and long standing acquaintances yield fruit over the albums near eighty minute duration, as the duo slices the time up into three wonderfully bizarre sonic landscapes.

Like their preceding collaborations there's a good mix of wet and dry playing, the duo starting off with the former before ultimately digging deeply into their respective bags of tricks and unleashing some seriously tasty proposals. Lytton's treatments can be severe and it isn't long into the first track "Known" that he begins layering understated textures for Wooley to play against (are there crickets in there somewhere?). There is a lot of subtle movement over the first half of the piece, with both musicians making great use of both the acoustic and electric bits of their arsenals. Over the last half, in conjunction with some electronic processing, Lytton disperses whistles and all manner of piezo-mic'd goodies as Wooley haunts the space with croaks and amplified wind gusts. The piece tightens up towards the end in an intense dialogue of horn and junkyard percussion. On "Unknown" the same junkyard percussion scampers crisply along beneath Wooley's heavy diaphonic tones to open the piece. The first third of the piece expands in an extended and highly textured interplay where the duo roil like a hot pan of bacon and eggs, emitting all manner of pops, squeaks, and sizzles. The piece is augmented momentarily by an intense haze of electronics, which drifts through and inspires more pointillist interactions between the duo. The final untitled piece is a (relatively) breezy 10-minute closing statement that is much more condensed than the previous two but is no less adventurous. It serves as a nice summation of the sessions and caps off another terrific album from one of my favorite duos in free improvisation. 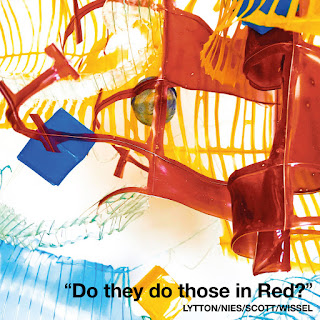 Recorded at The Loft in Cologne in 2017 and dedicated in the memory of Paul Rutherford, Do they do those in red? finds Lytton (table top bit and piecces) in collaboration with German musicians Joker Nies (electronics), Richard Scott (electronics), and George Wissel (saxophone). Nies is a sound designer and engineer who is active on the festival circuit and who has collaborated with John Butcher, Alan Siva, Dave Tucker, among many others. Richard Scott is an electronic composer and improviser who our readers might remember from the excellent Grutronic releases on Evan Parker’s psi imprint in the early 2010’s. And finally reedsman Georg Wissel, who having recorded or performed in duos with the other participants individually, is the least common denominator on this album.

On the first track “the nuts and bolts” Lytton employs his table top bits to create a textural canvas over which the electronics and saxophone amalgamate. Around the midpoint the density decreases and the electronics swirl and churn. Lytton briskly re-enters in a flurry of wildly unpredictable clatter, recapturing the textural emphasis of the piece. Wissel mainly plays percussively throughout, only reaching a throaty roar briefly towards the end. “It’s always a questionable activity” slows it all down and puts the emphasis on the electronics. Again, Lytton and Wissel play texture over the deep synth washes and colorful electronic fodder. The next track is the fantastically titled “Taking orders from fucking idiots”, on which some of the electronic bleep-bloop sounds called to my mind Morton Subotonick’s Until Spring. On “no man’s land” the group stretches out on a wild 20-minute improvisation, with touchstones ranging from Evan Parker’s electroacoustic groups (not surprising considering the members on this record) to the more aggressively electronic sounds of Kurt Liedwart’s Mikroton label. The closing piece, and my favorite from this session, “a constant state of flux or motion”, periodically weaves barely-there snippets of field recordings and voices into the mix. The track finds Wissel much more unrestrained during some of the rowdier portions and Lytton comes to the fore more often here as well with some wild electroacoustic sounds. Altogether it’s more varied with some lowercase sections to break-up and balance the stormier ones. Those who like free-improvised electronics will find much to enjoy in this sonic phantasmagoria.