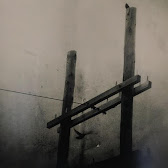 Following on the heels of recent releases with Bill Nace, our water is fire finds Nova Scotian jaw harp ace chik white on his second release with fellow Great White Northerner and prolific multi-instrumentalist Colin Fisher. Their first release, 2018’s pacific rim and hastings, combined recordings of the duo made in BC’s ancient coastal rainforest with a coarse live track captured at a club in East Hastings with Fisher on guitar. The tracks from the pacific rim are sparse jaw harp/voice/sax improvisations that are a sort-of loose spiritual cousin to releases like Brötzmann and Bennink’s Schwarzwaldfahrt (i.e. free improv al fresco). The album is spare but engaging and so I was eager to have a listen to this new offering from the duo. This time around the session was held/recorded at Fishers house, with Fisher on mostly percussion and woodwinds and white on jaw harp. Like their erstwhile offering this album is lean, running a meager 26-minutes, but it feels like the appropriate length to keep the aesthetic amiable.

The guys waste no time in getting gnarly on “home your home or mine”, spitting and snarling vocalizations across their instruments (jaw harp and what sounds like a bamboo flute) and in turn setting up a very damp four way conversation. Near the halfway point Fisher does light double duty on percussion; he’s no Hamid Drake but his thudding accents establish a rhythmic backbone that their previous release lacked. On “missing time” white’s slobbering enunciation is met with Fisher’s expressive play on some sort of reed instrument (perhaps a pungi/been/bin or related) and contrasted in thudding kick drum/cymbal strikes. Starting with “more steam” Fisher switches to percussion for the remainder of the collection, and rather than becoming beat driven it actually gets more textural, with the twang of the harp and white’s mouth sounds contrasting nicely with Fisher’s rolling and atmospheric accompaniment.

On “peak dizzy” white delves into some weirder and throatier sounds while Fisher does a really nice of job framing the jagged, spasms of jaw harp with all manner of percussive milieu. It serves as a mixer to white’s rough style and makes the piece go down nice and easy. On “shut the door” gruff vocalizations join the groaning, spittle-pocked percussive intensity. “together in heat” is a hyperactive bit of thumping and clicking where Fisher debuts some additional percussive flavors like hand drums and cymbal grima. The next track “u peacocks can sweat” is a short piece for small percussion and multiphonic(?) jaw harp. The last track “where. now” is similar to “peak dizzy” in that Fisher’s percussion does a fine job of encasing the very spasmic, irregular playing of white in a rolling wash of percussion, serving as the sweetener for white’s earthy brew.

Well, two albums in and I’m still pretty excited about the places this duo can go. There’s an unassuming playfulness to their collaborations that has shades of some of the great European duos like Bailey/Parker, the aforementioned Brötzmann/Bennink, or maybe Rüdiger Carl/Sven-Åke Johansson, and like some of the best records it sounds like they’re having a tremendous time just being in the room playing together.