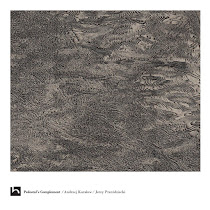 Featuring Andrzej Karałow on grand piano, guitar, and guitar effects and Jerzy Przeździecki on Buchla Music Easel and Eurorack System, Pedestal’s Complement is intriguing.  This is not because other musicians are not experimenting with synthesizers and e-strings (and piano).  Rather the emphasis that Przeździecki and Karałow place on contemporary classical and minimalist musicality rather than de/recontentextualized noise or soundscaping makes this album stand out.  In that sense, it may be an oddity in its embrace of older musical conventions rather than just the outre, abstract, or harsh.

Recorded live at the Ambient Festival in Gorlice, Poland on July 13, 2019, the performance is a year old, almost to the day depending on when this review is published.  Jerzy Przeździecki seems to have been active in the experimental club scene for almost 15 years and has been party to over 15 releases, mostly EPs. (Running at 25 minutes, Pedestal’s Complement falls into this majority.)  Andrzej Karałow, meanwhile, is a classically trained pianist and has three releases to his name, two of which with Przeździecki.  Unfortunately, I cannot offer any reflection on how this album relates to their previous releases.  I can say, however, that the two musicians seem to share a vision for whatever hybridity of musical forms this is.  One hears elements of house music and soundscaping’s deep textures and wide-eyed wandering. In part because of Karałow’s disciplined curiosity, however, this also has an intentionality and direction not always present in these types of postmodernist collaborations. In fact, rather than simply discarding the rule book or rewriting it, Przeździecki and Karałow gracefully merge different stylistic conventions into an electro-classical experimentalism that generally works.

With music like this, this reviewer has the tendency to spew out a dense stream of adjectives, onomatopoeic comic-book sounds, and other descriptors to see what fits.  I am trying to avoid that, here.  But, to finish, Pedestal’s Complement is an interesting listen that blends the dark and twinkling, the experimental and neoromantic (?) into a coherent and convincing package.  Although it does not always hit its mark, it does often enough to make a rewarding listen.