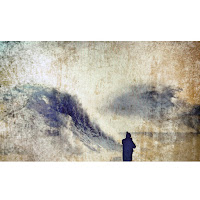 Violinist Biliana Voutchkova, cellist Michael Rauter, and violist Nurit Stark perform four works from minimalist composer Ernstalbrecht Stiebler on Für Biliana. Two of the pieces, the solo eponymous track and solo “Glissando,” were composed for the violinist, in 2015 and 2016 respectively. While “Duo 4 / Parallelen,” with Rauter, is another relatively recent composition from 2007, “Extension für Streichtrio” from 1963 provides a glimpse into the development of Stiebler’s style as well as its essence - by way of what’s not changed - including his distinctive combination of sustain, sonority, and movement.

The brief, six-minute solo “Für Biliana” could be confused for a duo. There’s a rocking, slow tremolo on a higher register while a droning sustain simultaneously sounds on a lower register. And these dynamics will breezily trade registers, back and forth. It’s a bit like a lullaby and, though the whine of string is almost always present, there are flourishes whose brightness and warmth might be confused for an organ.

The solo “Glissando” is not much longer, at nine minutes, and, while it could also be confused for a duo and features a similar sense of time and use of sustain, its mood is much gloomier. It begins with descending glissandos in silence like shooting stars in the darkness until the silence is mostly overtaken by sustained tones. The level reference of sustain heightens the sense of falling from the glissandos; an endless terraced pit like depictions of Dante’s hell. Occasionally, other techniques appear, only to be warped by glissandos as if by a fun house mirror.

The older composition, “Extension für Streichtrio,” is still built upon sustain separated by silence, with a sense of time and movement that is somewhat constant throughout the piece and not dissimilar to the other works here, and again with a focus on simultaneous playing from the instruments that simultaneously highlights their similarities and differences. But the delineations between sounds are abrupt and violent. And whereas volume in the other pieces remained almost constant, it’s rapidly increased around silences to accent them here. The effect is a more step-like sense of movement compared to the more undulating feelings from the newer compositions, or a more linear experience compared to a circular one.

As my personal introduction to Stiebler, I feel Für Biliana provides a worthy digest of the composer’s style. It’s certainly a singular approach, evoking distinctive movements through sonority and an unwavering dedication to alternating sustain and silence. There’s a lot to enjoy in the compositions here, and just as much in the timbral richness of the player’s performance.

Für Biliana is available digitally and on CD.