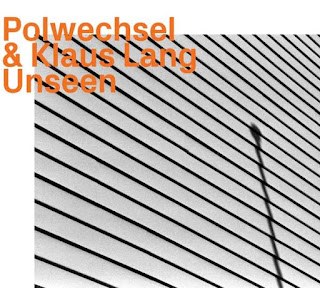 Organist Klaus Lang joins contrabassist Werner Dafeldecker, cellist Michael Moser, and percussionists Burkhard Beins and Martin Brandlmayr for three tracks lasting 67 minutes on Unseen. Lang is the latest in a long line of Polwechsel contributors that fits well with the morphing group’s distinctive aesthetic and includes John Butcher, Fennesz, Radu Malfatti, Burkhard Stangl, and John Tilbury. Such fast complimentary communication likely stems from Lang’s longstanding relationships with members of the group, documented on Small Worlds, Lichtgeschwindigkeit with Dafeldecker, and Moser’s Antiphon Stein. As such, the material of this 2018 recording isn’t exactly surprising for listeners familiar with these musicians, but it does meet the high standards of timbral and compositional quality that listeners have come to expect from Polwechsel.

“Easter Wings,” a Lang composition, is mostly an evocative atmosphere of eddying organ breezes building to howling winds, carrying a nursery jingle, and producing pulsing whines as they’re funneled through the streets, which sets off an orchestra of clanging, clamoring, twinkling chimes, bells, cymbals, and other objects like a sequined Salmoneus cruising through the neighborhood. There’s low end organ sustain mixed in, producing some tension with the contrasted extremes of the organ register, their volume, their frequency, their timbre. An interlude with a mournful throb from Lang and a kind of contrapuntal refraction or shimmering from the strings, with their similar phrasing just offset from one another, continues to tilt the listener towards unease before returning to the wind and chimes of before. Its mood is natural, celebratory, and relieved, yet simultaneously foreboding.

Moser’s “No Sai Cora-m Fui Endormitz” is mostly nimble, flute-like semi-quavers from the organ, mimicked closely by the strings. Yet this sometimes indistinguishable instrumentation will sometimes splay out, playing sustained tones in noticeably different registers to a jarring effect, before melting together again. Again, there’s a bit of an interlude, this time with the organ building to cathartic innumerable thrums, with shimmering cymbals contributing to a kind of transcendent effect. And it ends as it began, with the mimicked semi-quavers, accompanied by jazzy cymbal accents.

As if compositional motifs are phasing through the CD, the slow build of the Dafeldecker-composed “Redeem” loses the jarring juxtapositions and clearly delineated interludes of the first two tracks but continues with the instrumental obfuscation of the second. Organ and bass blend together, as does strings and bowed or fluted cymbals, or percussive pulses with organ oscillations. This blurred melange is sometimes accented with insect-like stick clicking, a kind of shooting star effect from warped whining strings, and a comically doomy descending organ scale.

As always, Polwechsel is able to produce palpable atmospheres and moods from subtle timbral dynamics and smart composing. But the sonorous warmth of Lang’s organ and the reverberant church this was recorded in lend a tender emotivity not often seen in their recordings. For that it might be their best yet.

Unseen is a CD-only release.