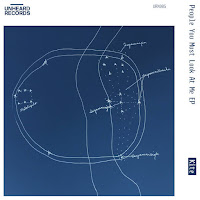 Although released in May of this year, this powerfully concise EP by Oglála Lakȟóta artist and composer Suzanne Kite was recorded in 2015, as part of a performance and installation at the Infinity Room gallery in Los Angeles. In this movement-based, multi-media work, Kite used a custom-designed body interface to interact with a range of three-dimensional projections in the gallery space, extending the body’s remit into a realm of spiritualized data. But while People You Must Look At Me originates as part of a solo show, it gathers a number of accomplished musicians into a post hoc group improvisation—even anticipating the remote conditions of performance thrust upon us in the year and season of its digital release.

As Kite explains in an accompanying note, players were given a recording of a looped chord to improvise around in separate situations. The recorded results—from saxophonist Matana Roberts, fiddle player Alicia Svigals, harpist Marilu Donovan, and a reverberant chorus of loons—were subsequently arranged by the artist, as an electronic composition that preserves the voice, freedom, and phrasing of each source recording relative to the time of the original loop. “I processed and arranged their improvisations afterward,” Kite explains in an accompanying note, “trying to move things on the timeline as little as possible.”

The EP begins with a contemplative invocation by Roberts, before a glistening shower of notes from Donovan’s harp. The modal basis for this theme produces a similar atmosphere to spiritual jazz, in form and instrumentation, in spite of the inaudible bourdon that harmonically supports the interweaving melodies. Svigals’ fiddle slides and soars on entry, as these several voices climb above an oceanic surge of synthesis. No sooner has the opener reached a barge-like crescendo, however, than the audible scenery changes. The second brief track builds around a remarkably clear recording of loon song, which distinctive tremolo is manipulated by the composer, producing a series of subtle stutters and bends. But it would feel unsuitably anthropocentric to call this an experiment in simple field recording, where the loons are afforded an instrumental integrity equal to that of their human collaborator.

People You Must Look At Me is a structured as a six-part suite and sonic palindrome. The tracks are named by nesting parentheses, save for the centerpiece—'(((,’ ‘((,’ ‘eternal death,’ ‘),’ ‘)),’ ‘)))’—and these themes are reprised in their specific instrumentation as closing statements, too. At the core of the EP is a short recording of a ceremony whereof I cannot speak, a tribute that powerfully extends the community of this recording and the sociality that it encompasses. Kite’s ongoing research and performance engages deeply with the funerary means by which people make sense of death as part of life; and with such rites in mind, the circular development of this EP’s thematic material feels philosophically consoling. One might propose a powerful, albeit negative, representational significance to the looped chord over which Kite’s improvisers weave their melodies—a present absence underwriting independent voices. Themes of this magnitude elude simplification, just as great music defies paraphrase; but suffice it to say that on People You Must Look At Me, Kite does more in twelve minutes than many works of greater duration.