Aural Terrains label was founded by composer Thanos Chrysakis as a creative space for exploratory contemporary music in its different manifestations, including ones that are informed by free-improvisation and free jazz legacies and strategies, and vice versa. The latest release does blur the artificial distinctions between composition, its interpretation, and free improvisation. 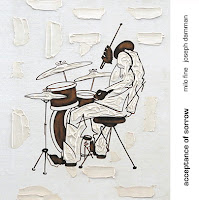 Acceptance of Sorrow brings together two Minnesota-based free-improvisers - multi-instrumentalist Milo Fine, known for his duets with Derek Bailey, Anthony Braxton, and Tim Hodgkinson, who plays here on drum-set, Bösendorfer imperial piano, B flat clarinet and marimba, and a generation younger guitarist, Joseph Damman, who is influenced by West-African music, who plays amplified acoustic guitar. Fine and Damman have been collaborating as a duo since 2011 and Fine hosted Damman on his APOPHENIA album (Atrocious Gnosis, 2018). Their first album as a duo was recorded in a concert at Studio Toile d'Angles in Minneapolis, Minnesota in September 2018. Fine mentions that his late parents, the percussion instructor Elliot and painter Agnes “purchased ‘sorrow’ while on vacation”, and now this sorrow adorns his home-based Studio Toile d'Angles.

The poetic titles (the first ones are taken from the autobiography of British noir writer Derek Raymond) set the atmosphere for this set of eight improvisations. The close, strong affinity of Fine and Damman, and their organic, free-associative interplay is stressed already in the first, extended piece, “Nothing Is Worse Than To Be Coerced By Dialectic”, where fine alternates between the clarinet, played in an urgent manner, and the marimba, played in more playful-dreamy manner, and the piano, touched here briefly. The tone is lyrical, introspective, and highly nuanced, and both Fine and Damman employ silence as an important element in their spectrum of suggestive sounds.

When Fine moves to the piano on the following “The Bitter Wave” the improvisation sounds as informed by free jazz and the seminal influence of Cecil Taylor. Damman injects well-articulated, song-like lines that contrast the dramatic, free-form playing of Fine. This tension between the restless, energetic playing of Fine and the modest, reserved, and subtle playing of Damman becomes the essence of this meeting. While Fine instantly soars to distant, chaotic skies, Damman playing radiates that he stands on solid ground, which enables him to offer structured narratives and introduces his impressive, singular voice. Check his leading role on “The Stench Of The Word; The Towering Babel”. 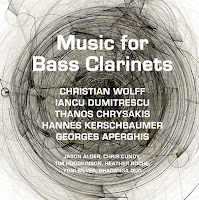 Music for Bass Clarinets offers six modern compositions, mostly for bass clarinets but also for clarinets and flute, all recorded live at café OTO in London in December 2017. The musicians are experimental composer Tim Hodgkinson, of Henry Cow fame; Jason Adler, currently conducting PhD research on the sonic possibilities of the contrabass clarinet, and half of the Shadanga Duo with flutist Katalin Szanyi; Chris Cundy, composer, and arranger specializing in bass clarinet, saxophones and other woodwinds; Canadian Heather Roche, recently referred to as “The Queen of Multiphonics”; and Yoni Silver, who works within a wide array of different and mostly experimental frameworks: different forms of improvisation, Noise, (Hyper)Spectral music, Performance, and composition.

The first composition is “Isn’t This A Time” by Christian Wolff, written in 1982 “for Saxophone solo (or other Reed Instrument, or more Saxophones, or more Reed Instruments)”, now arranged for a quintet of bass clarinetists. This beautiful composition highlights the deep sonorities of the bass clarinet and the almost transparent, resonating harmonies of the quintet as the sounds of the five bass clarinets are mirrored within the quintet. Iancu Dumitrescu's "Nuclear Aura" (2009) for Hodgkinson on clarinet researches the lower ends of the clarinet and the multitudes of sounds that can be produced in these deep, dark registers. "Γνώμων/Gnomon" (2016) by Chrysakis for a quartet of bass clarinets continues the former composition’s vein, but this serene, contemplative composition does it in a more harmonious, playful manner that explores more nuances in the dark, deep timbral range of the bass clarinets.

Hannes Kerschbaumer’s short "gryet.debris" (2014), played by Shadanga Duo - Adler on clarinet with flutist Katalin Szanyi, has an urgent, restless tone and plays with silence as a major element. Georges Aperghis' "Simulacre IV" (1995) is played with Silver on bass clarinet as a kind of a wild story with colorful, eccentric gestures, sounds, and noises, but with an ironic perspective. Chrysakis’ “Entwined Equinox” (2016), for the Shadanga Duo Adler on the alto flute and Szanyi on the alto flute, experiments with complex, dense and tense texture, contrasting the earthy, wooden tone of the clarinet with the ethereal, celestial tone of the flute. 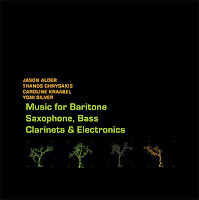 Music for Baritone Saxophone, Bass Clarinets & Electronics features a quartet Alder who plays the bass clarinet, contrabass clarinet, clarinet in B♭ and clarinet in E♭; Chrysakis on laptop computer and synthesizers; Caroline Kraabel on baritone saxophone and voice, known from the London Improvisers Orchestra and described as focusing on about acoustics and the interactions of electricity and music: reproduction, synthesis, and their implications; and Silver on bass clarinet. The album was recorded at OneCat Studio in London in December 2017.

This five-parts electroacoustic piece contrasts the noisy-atmospheric electronics, augmented with radio transmission, with the clattering of the reeds instruments, tortured bird calls, and other brief, subdued breathy gestures. All is focused on immediate, transient micro-events, delivered with impressive discipline and within a totally democratic framework where no musician takes a leading part. This kind of intense yet quite ethereal interplay reaches a peaceful, coherent coexistence on the third, dreamy part, and keeps this kind of almost silent, fragile balance until the end of it. 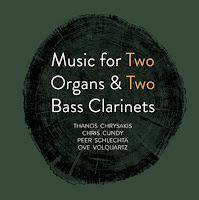 This five-piece piece begins as a slow, vibrant, breathy and quiet lyrical drone but soon fills the whole space with its dense, guttural, resonant vibrations. These vibrations become more urgent and fierce in the second part, but occasionally let some brief lyrical and playful veins to surface beyond the dense wall of deep tones. The third part shifts into a more fragile, chamber interplay and intensifies the lyrical, melodic veins with remarkable poetic playing by Cundy and Volquartz, both continue with their lyrical, contemplative throughout the fourth part, contrasting the restless, sudden interventions of the organists Chrysakis and Schlechta. It ends with a short, melodic piece that, again, enjoys the resonant qualities of the Neustädter Kirche 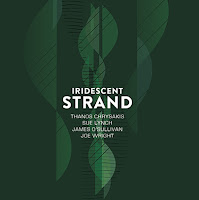 Iridescent Strand brings together Chrysakis who plays laptop computer and synthesizers; Sue Lynch, who runs The Horse Improvised Music Club in London, on tenor saxophone, flute, and clarinet; James O’Sullivan on electric guitar, who use a combination of feedback, conventional guitar techniques, and instrumental preparations in order to exploit the full sonic potential of electric guitar and amplifier; and Joe Wright on tenor saxophone and dynamic feedback system, who has an interest in curiosity-driven musical interaction and neurodiversity. The album was recorded at OneCat Studio in London in November 2017.

The five-parts electroacoustic Iridescent Strand focuses on sonic research: methodical, patient, and quiet, where the electronic noises and feedback blend and often veil the extended breathing techniques and other preparations of the guitar of O’Sullivan. This kind of layered, highly nuanced improvisation strategy brings to mind seminal outfits like AMM and Musica Elettronica Viva or the sonic ambiguity of outfits like Polwechsel. The chaotic, abstract interplay of the first two parts shifts slowly into a more collective sonic organism and into a mysterious, loosely structured texture.