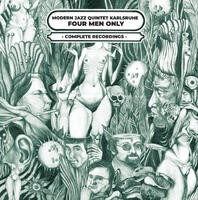 The European and especially the German jazz scene at the end of the 1960s was extremely creative. Everybody who’s interested in this music knows Peter Brötzmann, Peter Kowald, Alexander von Schlippenbach and Albert Mangelsdorff. However, there were exquisite bands whose names are known only to absolute experts and who have otherwise been almost completely forgotten. One of these bands is the Modern Jazz Quintet Karlsruhe.

The MJQK was founded in 1965 and consisted of Herbert Joos (flugelhorn, trumpet, mellotron), Wilfried Eichhorn (tenor and soprano saxophone, flute and bass clarinet), Helmut Zimmer (piano), Klaus Bühler (bass), and Rudolf Theilmann (drums) and released two LPs: Trees (1968) and Position 2000 (1970). Somewhat later Bühler left the band. The famous German concert impresario Fritz Rau, who - like Theilmann - came from the small town of Pforzheim, said to the drummer: “Your bass player quit? Then you are four men only“. That was the name for the new band and the quartet released two more albums: Volume One (1972) and Eight Science Fiction Stories (1973). On the last album they were joined by trombonist Wolfgang Czelusta, a versatile frontiersman, who was also at home in new music.

When the MJQK was ultimately formed in 1965, they first played hardbop, which was popular at the time. Their specialty was that they used excessive and free introductions for their compositions. Almost naturally, this led to an increasing turn towards free jazz. However, the pieces were never completely improvised, instead they grew around composed material. The majority of the pieces of the MJQK consist of ramified themes, some of them notated, others free, both interpenetrating. At the same time their music revealed formal development processes. Here one could always see how clearly the music was influenced by the Afro-American role models of the time (Coleman, Coltrane, Taylor), even if the band always enriched its compositions with very own ideas.

Solos and collectives are often separated from each other by interludes, varying both rhythms and individual structural units. This is especially true for the band’s first album Trees, on which the references to US-American free jazz are most obvious.

The title track features exactly these extremely extended introductions, the beginning is highly compressed and reminds us of Cecil Taylor's Unit or the first Globe Unity recording. Especially Helmut Zimmer shines with wild runs and powerful clusters. The solos are interrupted by the heads of the brass, which structure the material. At the end of the piece, the band returns to the energy cluster of the beginning. Another example is “Lonely Time“, where an energetic tenor saxophone solo accompanied by a free pulse rhythm crystallizes into a straight five-meter beat, which then leads seamlessly into a rhythmically bound piano improvisation over regularly changing modal levels. Another structuring technique are the contrasts they use both as to sounds and structure. In “Change of Beauty“, for example, a dense power-play of piano, bass and drums is abruptly broken off, only for a restrained, melodically and lyrically played tenor saxophone to emerge, which then leads organically into the final theme, which is played in unison.

On the second album, Position 2000, the group emancipates itself more strongly from its role models and puts the work with timbre in the foreground. In the title track of the album, the MJQK makes use of overdubbing and multi-play techniques (something that was met with criticism in the purist jazz scene of the time), which enabled the overlapping of different creative means to establish a multi-coloured and complex structure of dense percussion, wind accents and free improvisation. A perfect example of this is “The Sun Is Coming Over“. The programmatic idea behind the piece aims at a playing process comparable to the course of the sun from an earthly point of view, or - as the increased number of subtitles in the score suggest - the sequence of “Birth - Life - Death“; “Beginning - End“ or “Twilight“, as Ekkehard Jost once noted. The musical realisation of this actually quite trivial program takes place in an exciting, throughout pulse-free process of increase and reduction of great atmospheric density. The continuous build-up and reduction of dynamics and energy is contrasted with a gradual change of instruments, in the course of which very unusual tonal constellations are created. At the beginning of the piece the permissive colours of gongs, bass marimba, sharp flute sounds and the piano’s interior, which is worked on with mallets, determine the atmosphere. It’s like an Asian ceremony to welcome the day. In the culmination phase, combinations of soprano saxophone with flugelhorn, soprano saxophone with bamboo flute and finally two flutes with vocalisms by bassist Klaus Bühler determine the action. The end of the composition is then initiated by the coupling of mellophone and bass clarinet.

When Bühler left the quintet in 1971, Four Men Only continued to work in a similar musical way. Suite-like playing processes (also recognizable by the choice of the titles, which often refer to nature) with a formally and in its expressive content strictly differentiated material are main characteristics of Volume One. In general, a certain closeness to the Art Ensemble of Chicago is quite evident, both bands share a distinct sense for fine tonal shades and contrasts. Overdubbing and multi-play are employed even more often, which has the effect that you seem to listen to a large ensemble. The pre-production of wind and percussion backgrounds are especially effective in the first part of “Countdown/Excess“, when the solos of bass clarinet and flugelhorn are supported by a recorder choir. Tight, multi-coloured sound structures serve as a foil for improvisational unfolding, at the same time they even create a certain funkiness, although the bass is missing. Here, they sound as if they try to bring the density of the FMP sound and the open textures of ECM together. Eight Science Fiction Stories is then even more clearly designed as a suite than Volume One and the band seems to switch between different styles, which makes them sound like a forerunner of today's multi-stylistic bands. Also, they make more use of repetitions and they borrow compositional techniques from new classical music - possibly due to Wolfgang Czelusta’s influence. The head theme of the suite (“Departure“), performed in a polyphonic wind section, appears again and again in slight variations in the further course. The piece also has a certain cinematic quality (mainly in the parts without percussion) and is interrupted by harsh piano chords, flute trills, and percussive rustling. “Dead Season“ lives from long, sweeping notes, trombone bubbles, short, whip-like notes and Jost’s trumpet, which is often reminiscent of Miles Davis in the Sketches of Spain phase. “The Beauty Without A Face“ juxtaposes this trumpet with monotonous piano sounds reminding me of a Morse code. The influence of jazz tends to fade into the background in these recordings, although “Lucifer Is Marching In“ sounds like an extremely dark version of Miles Davis’s "Ascenseur Pour L’Echafaud“. All in all, the MJQK and Four Men Only were unique for European standards at their time.

There might be some speculations why especially the MJQK was not given the recognition it deserved and why they are not named in a row with the bands of Gunter Hampel, Manfred Schoof or Joachim Kühn. One reason for this might be the relatively unoriginal band name. However, the amateur status attributed to them was a far greater obstacle to greater recognition. It has always been a dubious aspect that any jazz musician who does not exclusively live from his music is almost automatically equated with poorly qualified dilettantes, who dismiss their job and are therefore not really to be taken seriously. From today’s point of view, in which hardly anybody in the free jazz scene can live just from their musician’s existence, this is all the more absurd.

Nonetheless, it’s hard to understand why no label was interested in recordings, so that the band had to release their albums themselves (as a result you’ve had to pay a fortune for the original albums). Listening to their music today there was hardly any other group that was able to make such good and intelligent use of the freedom of the then still new jazz. On the other hand, the band received sensational reviews in German and European magazines, which makes it even more incomprehensible that success and popularity remained so limited.

Like with so many of their re-issues, NoBusiness has succeeded in highlighting an almost forgotten chapter of European free jazz, something they also managed with their release of the two albums by Free Jazz Group Wiesbaden. The icing on the cake on Complete Recordings is the presentation of two formerly unreleased pieces by the MJQK, both are from a concert in Hannover. They prove what a sensational live band they must have been.

Definitely the re-issue of the year (yes, in spite of the wonderful Rashied Ali/Frank Lowe duo).

Annotation 1: A lot of information for this review is taken from Ekkehard Jost’s Europas Jazz, who has noticed the importance of this band already in the 1980s (unfortunately the great book is only available in German).

Annotation 2: Special kudos goes to Ernst Nebhuth, who initiated the whole project and who stayed on the ball for many years. He never stopped working both NoBusiness’s Danas Mikailionis and the musicians to make this project possible. He’s also the co-producer and compiled the very good liner notes including great pictures from live performances of the band. So, thank you, Ernst and Danas!

Modern Jazz Quintet Karlsruhe / Four Men Only - Complete Recordings is available as a triple CD and as a download. You can listen to it and buy it here:

In the US you can buy it at www.downtownmusicgallery.com