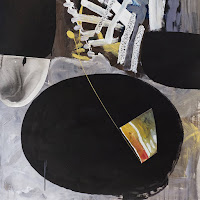 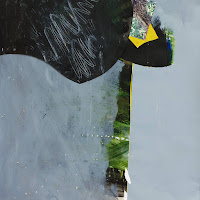 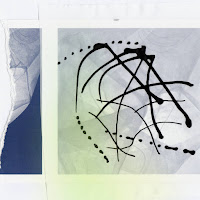 It has been nearly 20 years since Jamie Drouin and Lance Austin Olsen got together for their first recorded collaboration, the 2001 Tablet. Since then, they have collaborated on over 20 releases, primarily for theirInfrequency Editions label, which will celebrate its 20 th anniversary next year. At the beginning of this year (2020), FJB published my three-album review of some of their latest releases, though none of these albums was an Drouin-Olsen effort. Since then, however, the two have produced several albums collaboratively that, in composition, construction, and effect, seem eminently fitting for our current state of partial quarantines, fragmented and distorted memories of pre-Covid socialization, and the odd, hazy blur of one day into the next to which many of us have now grown accustomed. And with that, let’s revisit the near-beginning.

Conceived and recorded as a sound installation in 2003 and remastered for this 2020 digital release, Snowfield is one of Drouin and Olsen’s earliest releases and it is spare. This is in itself is not surprising. Over the years, the two artists have plumbed the tensions between musical sparsity, faint recontextualized sounds, and more ambient tones. Recent releases such as The French Drop (inspired by the Hieronymous Bosch painting “The Conjurer” and named after the “French drop” illusion) and This, and The Other Space (an examination of “fracturing of memory and the creation of multiple realities”) engage with soundscaping as a way not just to shape a composition, but to explore the understated space around it. Sounds – found and musical – are layered and woven together only to dissolve into single tones and reform into a delicate mass that oscillates between activity and quiet. The French Drop and This, and The Other Space, however, have a density, even when just implied, that separates them from early studies in Snowfield.

It would be easy to read too much into these isolated examples. But, it is hard for me to shake the idea that Snowfield, with connotations of white noise, are somewhat tentative explorations of new terrain. In that sense, the release could be read as an early expedition into a quiet extreme that laid the minimalist basis to but could only hint at the glistening if somewhat menacing vibrancy of The French Drop and This, and the Other Space. Indeed, the latter are characterized by a depth and richness of sound and a mysterious, fractured narrative of dislocated field recordings and synthetic noises. What is so intriguing about these are not just the media, but the distortions of uniformity achieved without repetition. Even when Drouin and Olsen stumble upon particularly satisfying combinations of oscillating drones, nervous ruffling, and hollow crackling, they rarely dwell in these places for long. When they do, they do so as if they were speedily but meticulously measuring every dimension of some newly discovered composite object. And then, they move on.

In their focus on the minutiae of discrete sounds, these three recordings are rather lambent. Yet, as with any flame which appears a smeared solid from a distance, their real beauty and intricacy only become apparent when listened to closely. The manner in which the duo magnify, manipulate, and converge sounds, moreover, imbues a strange vastness particularly into the more recent releases. If Snowfield is a set of meditations on the form and composition of various objects (admittedly a possible effect of its original role as an art installation), The French Drop and This, and the Other Space weave those sonic artefacts into a series of discontinuous but flowing narratives, that seamlessly shift between memory, dream, and repurposed experience. Even though these narratives lack linearity and spurns the normative musical devices that work to such ends, these releases always work to and remarkably achieve a finality. When they end, they feel like they make sense. They feel coherent, even in their inscrutability. And that effective achievement of ambiguous resolution is what makes The French Drop, This and the Other Space and so much of Olsen and Drouin’s work since the early days of Snowfield so thoroughly satisfying.

All three releases are available as downloads. 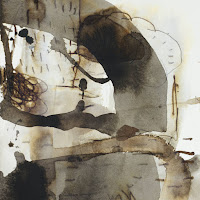 Just recently, Lance Austin Olsen released one more album, this time with sound-artist/guitarist Barry Chabala. Since this one does not involve Drouin, I had originally intended to leave it out. After first listen, however, I realized just how strong a release it actually is.

Olsen is as contemplative as always as he stirs his wreathing sonic porridge of fragmented field recordings. Chabala, however, is the real distinguishing feature in this marriage of sound art and blues-inspired free guitar runs. Admittedly, there is some noodling, but most of these two tracks are inspired. This applies especially to the times when Chabala is at his most spacious and amelodic, allowing his guitar to bleed into Olsen’s montage-work rather than just hovering atop it. Listening to this as the quarantine unsteadily lifts, moreover, I am especially struck by the use of voices in the second track. Coupled with Chabala’s folk tendencies, this creates the impression of a vague memory of earlier times, when these distorted voices were clear and immediate, when isolation could mean willing solitude and was always curbed, welcomed or not, by interpersonal contact. Life is different now, and even familiar sounds – field recordings, speech and found sounds from before the pandemic, a simple guitar - have taken on new, ominous meaning.

Patterns is available on CD and as a download.