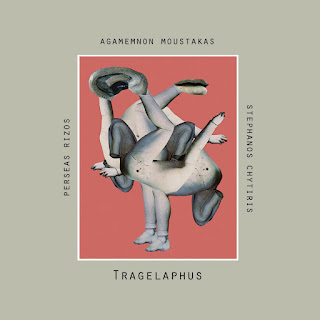 One of the key elements in Tragelaphus (which in Greek means crying and laughter at the same time) is the ferocity of the trio playing. I do not mean that in terms of sheer volume. It’s basically the inner intensity of the trio’s playing, the engagement and the pathos involved. If you want a point of reference, yes, the Schlippenbach Trio could be it, but by labeling the trio’s music I’m not being fair to them, because Tragelaphus stands on its own.

The CD lasts for over seventy minutes divided in five tracks. Moustakas plays the piano, Rizos is on the tenor sax and Chytiris on the drums. Unfortunately for the guys the CD came out during the Greek lockdown (in the meantime the imbeciles in power opened up the borders for tourists without any precautions, so things are worse), a situation that does not allow them to present this great CD live.

It would have been a blast if they could. The way they interact, the energy which is transmitted through it screams that this is something you should listen to live. Sometime, a year ago (maybe a bit more) I caught the trio live. In the meantime they really struggled, through rehearsing together, to form a sound of their own and Tragelaphus clearly states that.

There are no highs or lows on the CD, only a constant flow of energy and ideas. The final mix is also a very rewarding job from George Priniotakis. All the instruments are equally involved in the outcome of it, a fact that allows the listener to feel it like it’s a live recording. Moustakas playing is very vibrant. He moves through the keyboard in a percussive way, while his interaction with the tenor sax of Rizos makes you think they are playing together for years. Chytiris provides a solid backbone for the other two, while the rhythms he produces seem even flexible on their own.

The thing I didn’t realize from the beginning is the small dialogues that go on in duos or sometimes as a trio. This feels like they are in a constant dialogue between friends, a non linear discussion that evolves into track five which is called Part V. Clocking in 28 minutes, it seems like the centerpiece for Tragelaphus, while it consists all the aforementioned elements. A great piece of free improvisation even though not everything is spontaneous on Tragelaphus. There are ideas in there, ready to be discovered since you, as a listener, have only one obligation: to listen repeatedly with the same level of engagement they play.