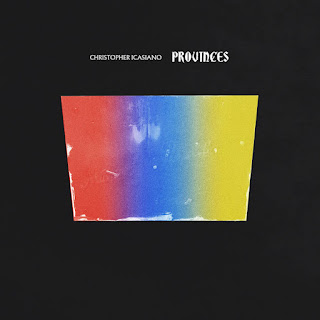 I had to listen to this record for months before I could write about it. It’s that different. Percussion solo records are an interesting breed, and this one doesn’t remind me of anything.

Icasiano’s percussiveness is all about the pacing and grouping of the beats. Clusters, clusters, driving and then receding, with crisscross patterns emerging from the maelstrom. Psychedelic. Disorienting. There is no “one,” and while everything is on repeat, nothing is repeated.  There are footpedals or pads (sometimes with the reverse key down) which provide a counter-sonority to the stick work, so the patterned clusters weave in and out with looping drone tones and electronic effects, sometimes sampled found sounds. Icasiano hits you with repeating figures until you forget they are happening, and then under your nose they alter, changing the mood and feel, or abruptly stop, leaving you with what had been merely drifting, incidental noises as the principal song. Lost in the rhythm, you forget where you are.

The 5-movement “Provinces” opens with a hint of dark foreboding. Then 1000 relentless dry snare hits alternating with closed high-hat taps.  The foreboding returns like exhalations. Slight alterations (there’s a human there, this is not an algorithm, or rather, it is a body’s algorithm) of tempo and subtle dynamics. A pulsing thumping kicks in, and without realizing it, we’ve got embattled sonic textures with four overlapping tempos like a Steve Reich puzzle. The relentless snares withdraw leaving a cascade of shifting notes (Sigur Rós style), only to return as a dense, interactive accompaniment to the long tones. The piece moves into a free section with some backward pedal action, gentle, intentional cymbal work, and then the smoothest rolling from snare to toms to cymbals. Technique and taste and musicality. Now a kick drum under a trance beat, wind and hum providing the melody. It is the same and different, and somehow free-jazz to metal to trance to pop candy cavalcade makes musical sense, with each section providing commentary on the others.

The 3-movement “Taho” opens in a similar fashion as “Provinces.” Instead of the snare/cymbal cycle, here we get relentless toms/cymbal, again over shifting long tones, and almost inaudible field recordings gesturing outward from the hermetic sound field. At a certain point, under wind and weather, something—shakers, and then brushes on plastic sitting atop the snare maybe—takes center stage, then retreats behind oscillating scratches and noise. Brush bursts on snare take hold, again under wind and weather, which releases into that smoother than smooth round-the-horn tom-snare-rims-cymbal party. The energy reduces to a kick drum and toms motif which relaxes into the end of the recording, found sounds from the Philippines.

This record is a feast. And, it’s solo percussion!

I understand there is a limited print-run of vinyl, if you’re into that sort of thing. CDs and bandcamp downloads, too.
http://originarts.com/recordings/recording.php?TitleID=82796
Paul on Wednesday, September 16, 2020
Share

Excellent review, Gregg! I've listened to Bad Luck's Four, but this
writing has gotten me very interested in a musician and recording I otherwise know very little about. Which I think is the point! Looking forward to hearing this one.

Thanks, Keith. Chris is a big part of the music ecosystem here. One of the top 3 drummers in Seattle, I'd say. He has a very distinctive approach to rhythm. I've heard him play live at least a few dozen times, and he can do whatever he wants.