Peter Brötzmann. We do not say much more. 79 years old and still taking chances, looking for new challenges, and reaching an energy level that most other musicians only envy at. 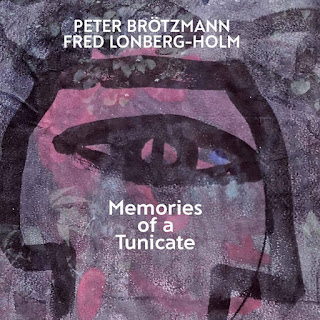 Memories of a Tunicate is the third duo album from Brötzmann and cellist Fred Lonberg-Holm (who also adds electronics here). The two began collaborating in Brötzmann's Chicago Tentet and later in the ADA Trio with drummer Paal Nilssen-Love.

This meeting, recorded in studio in June 2019, is a raw, muscular, and brutal one, a natural atmosphere for both Brötzmann and Lonberg-Holm, and the titles of the pieces, all named after obscure sea creatures, intensify this spirit. Brötzmann and Lonberg-Holm sound energetic, charged with a ton of fresh, urgent ideas and eager to comment on each other’s gestures. The dirty, distorted electronics effects and pedals of Lonberg-Holm, often sounding like a battered electric guitar or some out-of-tune industrial machine, with his aggressive cello playing fit perfectly the anguished wailing and shouts of Brötzmann. Lonberg-Holm knows how to avoid sliding into sentimentality when Brötzmann tries one of his angry, lyrical cries, especially on the last piece “Stolidobranchia”.

Brötzmann takes in this tough and rough meeting the role of the responsible adult, maintains a strong and clear voice, sometimes angry and sometimes gentle and openly emotional. Lonberg-Holm is the wild and anarchistic card here, injecting subversive noises, ironic tones of a haunted guitarist or simply enjoying the role of an experimental sound artist. But these contrasts and this kind of nervous tension generate the best out of Brötzmann and Lonberg-Holm, as both feed each other’s moves and ignite many intense, explosive moments. 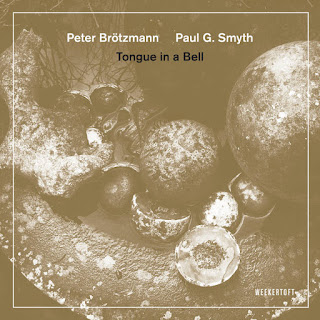 Irish free-improvising pianist Paul G. Smyth has worked with some of the most daring sax players: Charles Gayle, Lol Coxhill, John Butcher, and Evan Parker alongside other idiosyncratic improvisers as Derek Bailey, Keiji Haino, Wadada Leo Smith, and Damo Suzuki. He managed to earn the respect of Brötzmann, who rarely records with pianists (Smyth is much younger than the pianists that Brötzmann has played with before - Belgian Fred Van Hove, German Alexander von Schlippenbach and Japanese Masahiko Satoh), and their first duo album Tongue in a Bell was recorded in Dublin in January 2015.

This meeting begins, typically, with a raw roar of Brötzmann and continues with a muscular and intense duet, with Smyth all over the piano. But later on this opening, 25-minutes of the title-piece and on the following shorter pieces, Smyth taps into the angry ballads that Brötzmann likes to explore in the last few years and he enriches the thorny-emotional side of Brötzmann with layered, lyrical colors. Then Brötzmann plays with a warm and reserved voice and in an exceptional stately elegance, reaching out to the seminal voices of the great tenor players of jazz. Throughout this meeting, Brötzmann and Smyth succeed to balance the raw with the emotional, the intensity with poetic, and the total spontaneous eruptions with the contemplative and lyrical. 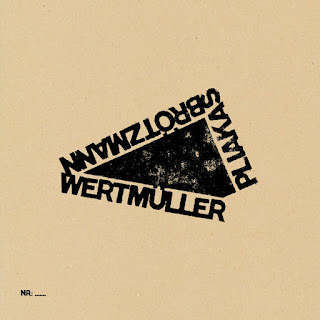 Farewell Tonic is the official release of Brötzmann’s limited-edition, live bootleg documenting the last performance ever in the legendary New York club Tonic, captured on April 11, 2007. There was nothing more symbolic than closing this beloved club with a blast, a Full Blast, Brötzmann’s powerhouse trio with Swiss electric bass player Marino Pliakas and drummer Michael Wertmüller. The original recordings of Farewell Tonic were remastered by Martin Siewert and released as numbered, limited-edition of 500 vinyls plus a digital version.

Farewell Tonic is exactly what you can expect from an outfit by the name Full Blast, raw, fierce, loud, wild, and volatile, always on the verge of an apocalyptic meltdown, from the first second to the last one. The mix puts Pliakas’ effects-laden bass in the center and veils the great drum work of Wertmüller, and sometimes even the roars of Brötzmann himself (and it was not easy to do so in the small, steamy room of Tonic). There are some tactical detours where the massive sonic onslaught seems to have slowed down, especially on the introduction to the third piece, but only to realign its forces to another attack from another angle. You may think that Full Blast would exhaust its energy reservoirs after the first, 16-minutes nuclear attack, but Brötzmann promised the enthusiastic audience more fun in this sad evening, and you can count on him, he is a man of his word. 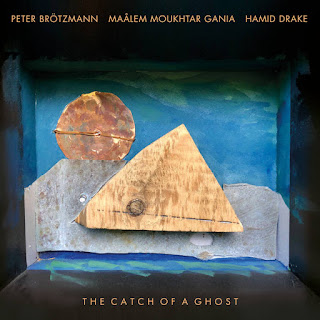 Brötzmann introduces The Catch of a Ghost with an optimistic observation: “3 names, 3 cultures, 3 continents, 3 different concepts of time and timing – this is the essence of this trio. This is what we have to bring together”. This trio was recorded at the AngelicA, Festival Internazionale di Musica in Bologna, Italy, in May 2019 and features long-standing comrade, drummer Hamid Drake, who was part of Brötzmann’s Ayler-inspired Die Like a Dog quartet, and Morrocan, Essaouira-based, guembri (West-African bass instrument) player and vocalist Maâlem Mokhtar Gania, last representative of a legendary line of Gnawa master musicians. The brother of Gania, the late Maâlem Mahmoud Gania, has played before with Brötzmann and Drake (The “Wels” Concert, Okka Disk, 1997, and again in the Unlimited Festival in Wels, Austria, in a quartet with bill Laswell that was featured in the box-set Long Story Short, Trost, 2013).

The atmosphere of The Catch of a Ghost is much more reserved than the explosive one of The “Wels” Concert. At first, at the beginning of the extended title-piece, Brötzmann sounds as if he is in a world apart from the sensual-spiritual, call-and-response rhythmic patterns of Gania and Drake. But soon he adapts himself to the hypnotic, trance-like pulse, and his tenor sax wailing answers cleverly the vocal phrases of Gania and often pushes the interplay to intense, ecstatic terrains. Later, Brötzmann leads the trio into more open interplay that accommodates the hypnotic pulse of Gania and Drake to his energy level. The tension between Brötzmann’s spectrum of contemplative, sometimes even lyrical playing and his wild swings and the one-dimensional, repetitive and trance-like rhythm section continues to ignite the following “Almost with the Sun” and “Sound that Shimmers”. But on both pieces, the devotional singing of Gania and his rhythmic work with Drake are more effective and coherent than the brief attacks of Brötzmann. Only on the encore “Dip and Dive” the raw, physical energy of Brötzmann reaches a balanced coexistence with the cyclical, rhythmic loops of Gania and Drake.