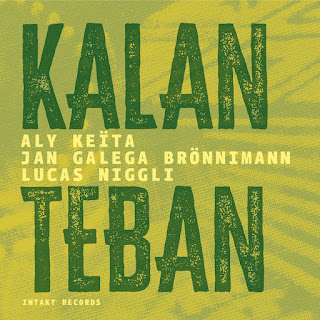 This album is a real treat. The second release by the trio of the Ivorian balafon and kalimba master Aly Keïta, the Swiss reedman Jan Galega Brönnimann, and the Swiss percussionist extraordinaire Lucas Niggli, Kalan Teban consists of twelve tracks of infectious Eurafrican polyrhythmic bliss. That may sound overstated and, admittedly, I have little exposure to African music apart from a few Ethiopiques collections, some Nigerian Afrobeat artists, and the South African expats in the Blue Notes and Brotherhood of Breath circles. Then again, why should one equate these provenances and styles with the creations of two Cameroonian-born Schweizer and a balafonist from Cote d’Ivoire simply because they might have shared, at times, a continent?

What, moreover, should one expect from this combination of talents? If you are familiar with Kalo Yele, the trio’s first release, you know what you are in for. For those who are not, Kalan Teban is an exploration of musical forms centered around complex drumming, dreamy clarinet melodies, and Keïta’s hypnotic, wending waltzes atop his keys. The song structures – melodic or vamped introduction, theme/refrain, improvisations around the theme, refrain…flourishing coda – harken to a jazz tradition. The rhythmicism, however, is presumably more rooted in a West African lineage. I am particularly struck by the balance between the unfamiliarity of sounds and phrases on the one hand and the familiarity of the structure. The latter gives me something to hold to ground myself. The former, elevates the music to a realm that is entrancing. This music really is mesmerizing, as the best percussion explorations are. And, it is elevated. Not just in terms of a refined art, which it surely is. This music is also elevated in the sense that it is uplifting and optimistic, even when it is at its most gentle and pensive.

Clearly I am fumbling over descriptors, here, so I will get to the point. I initially picked this album up because I was intrigued by the line-up of musicians and convinced that “world music” (a term I am desperately trying to avoid) on Intakt would be something special. I decided to review it not only because I was right (h/t to self), but because this is the type of album that I would normally not notice unless I was intently searching for something different from my normal fare or read about it on a trusted source. And, had I not given Kalan Teban a chance, I would have missed out on an album whose hopeful spirit and sheer colorful brilliance provide a pronounced contrast to the doldrums in which we have all lately been wading. A timely album, and one that rewards repeated listens.